Last of the ham goes into our first terrine

Posted on January 28, 2015 by rmgtravelsandfood

Some followers of this blog will know that Maggie and I spent three full days and nights in the Cote d’Or region of Burgundy in April 2014. To recap: we spent a sinful amount of money on food and wine.

One of the many dishes we enjoyed was a ham and parsley terrine, a traditional Burgundian item. We had it on three occasions: as an amuse bouche at La Grilladine; as an entree at the restaurant Chez Jeannette; and as part of a mixed plate of cured pork meats at a small, quiet hotel in the village of Epinac. They were all good but the third version was the best.

We resolved that we would attempt to make this dish ourselves. Soon after we returned home, I found an online recipe and saved it to our desktop.

We could have made it during our winter months. Ham hocks are in plentiful supply at that time of the year and are much in demand for preparing soups and casseroles. Indeed, we made some pea and ham soup last winter. But a terrine is a dish served cold and suited to casual, warm weather dining. So, we put the project on hold.

Then came Christmas and our decision to buy a whole leg of ham for the festive season; inter alia, we planned to use the bones and some remnants of meat to get our terrine started. However, when we studied the recipe closely, we discovered that we might need four ham hocks to yield enough meat. And that was a problem, as hocks aren’t supplied to butchers and delicatessens in summer because nobody is making pea and ham soup and, apparently, nobody wants to make a traditional Burgundian ham and parsley terrine. Except us!

Luckily, we shared our frustrations with our butcher. He offered to remove the bone from a leg he was using to cut slices for post-Christmas ham junkies; and he suggested we try our luck at the deli a few doors along the street. The deli did have a hock leftover from a leg of ham and it was sitting in their meat cabinet waiting for a new owner. $5 and it was ours. That gave us plenty of bone and meat.

If you visit the recipe, you will find that the bones need to be simmered for 3 hours in water to which various flavourings are added. After we had done that and let the ham cool in the liquid, Maggie removed the bones and most of the meat. Then we strained the liquid to remove the solids – through a coarse sieve at first and then through a fine sieve. We covered the reserved meat and cooking liquid and refrigerated them overnight.

Next day, Maggie picked over the meat to tidy it up and we were left with exactly the recommended one kilogram! All the parsley needed to make 1 cup of chopped leaves was picked from our garden – we have a spot that produces Godzilla-like plants every year. And then we needed some jelly, to hold the terrine together.

Now, the recipe suggests that you combine some softened gelatine leaves with a cup or so of the deglazed cooking liquid, warmed in a saucepan. However, because one of the ham hocks still had its skin on, the cooking liquid was thoroughly gelatinous already. So, we put the gelatine back in the pantry for another day; we also found that we needed to pour about one and a half cups of the cooking liquid into the packed terrine. 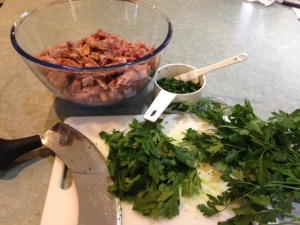 How did it turn out? Well, it certainly looked the part and the texture and flavour were good. It went beautifully with some of Maggie’s green tomato pickle. Next year, we would add the jelly progressively as we pack the mould; it hadn’t made it to the bottom in sufficient quantity. Also, we would combine a bit of Dijon mustard with the ham and parsley, to make the flavour profile more complex. Otherwise, a mighty fine first attempt that gives us the confidence to consider making some other types of terrine.

Maggie and I were both born in the early 1950s and we live in Melbourne, Australia. This blog is mainly devoted to our shared passions for travel and fine dining at home. Recently, I added Australian politics to the scope of the blog, inspired by the election of a Labor Government at a national level. Rick Grounds
View all posts by rmgtravelsandfood →
This entry was posted in Cooking, Travel and tagged ham and parsley terrine, Ham hock, terrine. Bookmark the permalink.