Posted on May 6, 2014 by rmgtravelsandfood

Frau Grounds has just pointed out that my account of how we spent Tuesday afternoon comprised activities which actually occurred the next day, except for the bit about tasting white wines. Not that one should let the facts get in the way of a good story but I will tidy that up when I add photos next month.

The main omission from that post was our visit to Moutarderie Faillot, just a few doors along from our hotel. We tasted several mustards and bought three different jars, plus an extra one for a friend back home.

Now to what we did on Wednesday. We knew that it was Market day, as is also the case every Saturday. We had vivid memories of visiting the Beaune market while on a coach tour in December 2009; we had been salivating at the prospect of a repeat experience of such things as freshly roasted chicken and ham hocks. But the market must be quieter mid-week and 30 April is a long way from Christmas, so we had to put our palates back in neutral!

After a light breakfast, we decided to visit the remarkable Hotel Dieu, built in 1443 at the behest of the Treasurer to the Duke of Burgundy, to provide nursing care for poor persons who were ill or dying. The entry fee of 7 euros included an excellent audio guide, which led us through this extensive and complex site. Highly recommended!

After a lunch which we can’t recall, we DID stroll around the streets of Beaune. Later in the afternoon, our the subject of dinner made its way into our conversation. Maggie had an olfactory memory of escargots from a neighbouring table the previous evening. So, having established that an alternative was not open, we decided to return to La Grilladine.

Our hosts recognised us and arranged that we receive a different amuse bouche – a sample of the house ham and parsley terrine; this is now a dish we will try to make in our kitchen. For an entree, Maggie had  six escargots, in the traditional style; she was very satisfied. I had a salad of fresh leaves tossed with various grilled small crustaceans and a dressing that played its part with subtlety; delicious, yet deceptively simple. 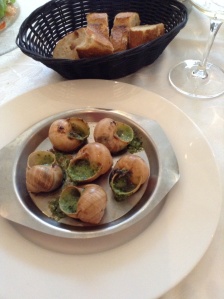 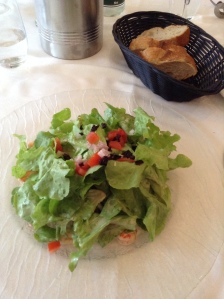 For a main course, we both chose the braised chicken breasts with a mustard sauce, which appears on numerous menus in Beaune. It was served with some seasonal vegetables and was quite a contrast to the Coq au vin of my first meal at La Grilladine. The breasts had been poached, probably in a stock, and then briefly pan-fried to add some caramelisation. The sauce was an act of, well, sorcery, blending stock, wine, mustard and cream into a lustrous whole. I think we liked this dish!

We chose to leave our palates to savour the chicken and its sauce while we enjoyed the last drops of our wine; this time it was a 2009 white from the Monthelie appellation, another lovely wine. We left La Grilladine on very friendly terms with so many happy palate memories. A bientot! 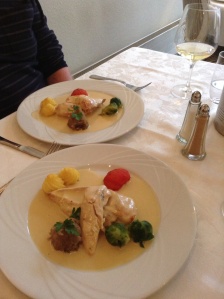 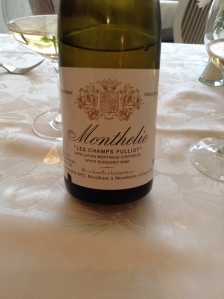 Maggie and I are both in our mid-60s and live in Melbourne, Australia. This blog is devoted to our shared passions for travel and fine dining at home. As cooks, we are skilful and adventurous within a framework of mainly traditional ingredients and techniques, and we aim to prepare nutritious food that looks good and tastes delicious. Our evolving repertoire is influenced by both our travels and Melbourne's vibrant food culture. While we are young enough, our priority travel destinations are overseas, although we do spend a few long weekends each year exploring parts of south-eastern Australia. As travellers, we are most comfortable with a combination of organised and independent touring. Our first overseas journey together was to Italy in the northern autumn of 2008. We later travelled in France (2009), Spain (2011), Singapore and Cambodia (2012/13). All trips from 2014 to 2016 are documented in this blog. When time allows, we will publish posts about our journeys - eight and counting - in 2017, 2018 and 2019
View all posts by rmgtravelsandfood →
This entry was posted in Eating out, Travel, Wine and tagged Beaune, Burgundy, Dining in Beaune, Escargots, French food, La Grilladine. Bookmark the permalink.