Posted on May 5, 2014 by rmgtravelsandfood

We returned to Beaune after our lunch at Meursault, parked the car at our hotel, freshened up and headed off to stroll around the old town centre. Exploring Beaune on foot is a pleasant and interesting activity. There several pedestrian-only streets, enticing side streets, various buildings of note and attractive shop windows. There is also a path along the old city ramparts, much favoured by joggers.

Our wanderings were followed by two wine diversions, one to buy two modestly priced reds from the 2009 vintage, the other to taste a couple of whites, by the glass, at different price points. By this time, I was in planning mode – one of my character flaws according to some – on the subject of an evening meal, preferably one that included Coq au vin. I was keen to compare a traditional, Burgundian version with the dish I prepare quite well at home.

We worked our way around the centre of town from menu to menu – the distribution of the alleged 140 restaurants is quite compact – but found only grilled chicken or chicken with a mustard sauce, some with a hefty price tag to boot. Then, just a had begun to believe that Coq au vin is just too last century, and me with it, we found it on the menu for La Grilladine. The menu’s pricing was keen and the presentation of the internal spaces appealing.  So, in we went and soon we were comfortably seated with menu and wine list in hand.

The meal that ensued was complemented by excellent service, including some guidance on a wine.

For starters, we received an amuse bouche of gazpacho in a shot glass; the tomato base was good but a little dominant compared to what I like to make at home in the heat of summer (see my earlier post on warm-weather soups). Maggie chose a rabbit terrine as her entree. “It was really beautiful”, she has just reiterated. I ate a plate of finely sliced raw salmon, marinaded with an almost imperceptible mix of herbs, seasoning and, possibly some verjuice or citrus, served with a quenelle of iced tomato and basil purée. This light, fine and elegant dish was out of my league!

Maggie chose Maigret du Canard for her main, duck being one of her favourite foods, even more so in France. For this dish, a duck breast is seared on both sides, leaving the flesh deep pink, then sliced and served with a sauce of raspberry and vinegar. A lot of fat to be removed but quite tasty.

Meanwhile, I tucked into my Coq au vin. There were some nice vegetables on the plate but my palate has forgotten them – this was all about the Coq! First point of difference: the bird in this dish was, indeed, a rooster; well, two pieces of one. So, the meat was still firm despite a long period of cooking. Secondly, there were no solids in the sauce, other than some pearl onions from a tin which had been added when plating. Any mushrooms or cured pork had been removed, possibly used just to flavour the original stock. Overall, it was a superior rendition, giving me much food for thought!

For desserts, Maggie had Creme brûlée, another firm favourite, and I had some wedges of pear, deeply coloured and flavoured from prolonged poaching in red wine and spices, yet still al dente. 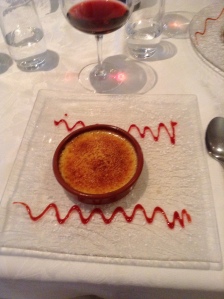 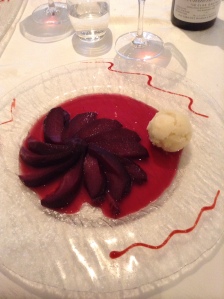 Our wine was an excellent 2009 red from the Monthelie appellation; it was a perfect partner for the for food.

By the time we departed, La Grilladine was crowded with customers who looked just as content as we were.

Maggie and I are both in our mid-60s and live in Melbourne, Australia. This blog is devoted to our shared passions for travel and fine dining at home. As cooks, we are skilful and adventurous within a framework of mainly traditional ingredients and techniques, and we aim to prepare nutritious food that looks good and tastes delicious. Our evolving repertoire is influenced by both our travels and Melbourne's vibrant food culture. While we are young enough, our priority travel destinations are overseas, although we do spend a few long weekends each year exploring parts of south-eastern Australia. As travellers, we are most comfortable with a combination of organised and independent touring. Our first overseas journey together was to Italy in the northern autumn of 2008. We later travelled in France (2009), Spain (2011), Singapore and Cambodia (2012/13). All trips from 2014 to 2016 are documented in this blog. When time allows, we will publish posts about our journeys - eight and counting - in 2017, 2018 and 2019
View all posts by rmgtravelsandfood →
This entry was posted in Eating out, Travel, Wine and tagged Beaune, Burgundy, Coq au vin, French food, La Grilladine. Bookmark the permalink.