Vienna via Dijon and Salzburg

Posted on May 8, 2014 by rmgtravelsandfood

There will be one last post about our Côte d’Or dining experiences but I am overdue to tell friends and colleagues in Melbourne about the progress of our trip.

We are now in Vienna, the grand capital of the former Austrian empire and the epicentre of great classical music. We made our way here with three train journeys: Dijon to Zurich on a TGV, maximum speed of 314 kmh; a 14 minute ‘stopover’ before a four-hour ride to Salzburg; and, on Tuesday, a very efficient trip from Salzburg with Westbhan, a low-cost competitor with the state-owned OBB.

After the delights of Beaune, we found Dijon to be a bit sterile. True, it is a much bigger city but it’s as if it has been cleansed of much of its character. However, the streets in the vicinity of the central market were livelier and the market itself was magnificent. Imagine combining all the fresh produce sections of both Victoria and Prahran markets expanding most of the delis, meat and seafood by 50 per cent, laid out on a neat grid like the centre of Melbourne, only flat! You can imagine the set of our jaws?

The haul to Salzburg was, well, long but the time passed comfortably, with varied and attractive scenery, including quite a bit of snow, on higher mountains, that hadn’t thawed yet.

It was cold and wet when we arrived but the rain cleared overnight, with a forecast of sunshine to come. We set ourselves up for a few hours of exploration with a good breakfast at our hotel; the spread included cereals, fresh fruit platters, a variety of meats and cheeses, some salad vegetables and several condiments, all in addition to croissants and a variety of breads. (I will say more about our wonderful hotel later.)

Sated, we walked at a gentle pace towards the old town. We crossed the Salzach River on the Market footbridge, adorned these days with little padlocks on which love messages have been written. (Some shops sell painted red padlocks, ready for immediate use!) This set the tone for what has become of the old town since I saw it in 1982 – it has been boutiqued, overrun by retailers of everything from Louis Vuitton to kitsch to hamburgers – and the streets are filthy with shoppers. The time warp feeling was amplified by the staging of a marathon foot race, with its finishing line in the heart of the old town; this did have the upside of colourful entertainers!

It was time to escape from these contemporary distractions. We headed for the hill, the one overlooking the old town, the site of Festung Hohensalzburg, the ancient fortress that is Salzburg’s principal landmark. Being of a certain age, we chose to ascend and descend by the world’s oldest funicular. Once we were on terra firma again, the first wow moment was the spectacular view; no wonder the old archbishops felt safe up there! 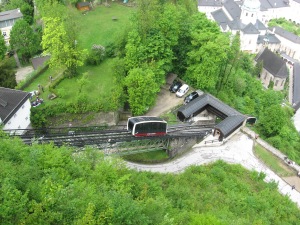 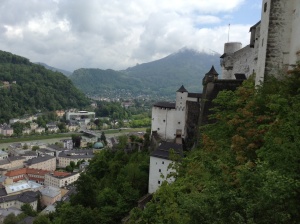 Other highlights of our extended visit to the fortress included its museum, the state rooms where evening concerts are held, and a museum of Salzburg’s famous marionette theatre (worth checking via Google).

It was now mid-afternoon – time for a meal. We returned to the old town and chose a restaurant – K&K – that was not overrun with tourists. (Yes, I know that we are tourists too but, when it comes to dining we like to pretend we are locals!) We had a delicious lunch (I won’t be describing meals in detail for the balance of our trip; I will do that when we return home.)

On our way back to the hotel, we strolled around the pretty Mirabell Gardens. The sun was out; locals and visitors alike were enjoying the flowers and fountains. 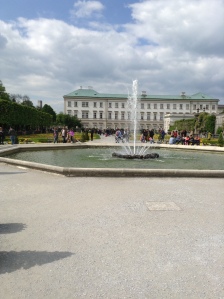 Monday brought sunny, mild weather. We had a late, leisurely breakfast at our hotel, wrote postcards and purchased our train tickets for Tuesday’s trip to Vienna. In the afternoon – wait for it! – we went on the Sound of Music tour. It was actually well done, with plenty of information on the making of the film, and some beautiful scenery in Salzburg and in the nearby ‘lakes and mountains’ region. And, yes, there was singing.

Our day ended with a good feed of home style Italian dishes at a nearby restaurant, including the best plate of antipasti we have eaten.

On Tuesday, we bid farewell to Hotel Mozart, having enjoyed outstanding service, a clean, comfortable room, an excellent breakfast spread and more.

It was time to catch our train and make our way to Vienna.

Maggie and I are both in our late 60s and live in Melbourne, Australia. This blog is devoted to our shared passions for travel and fine dining at home. Recently, I added Australian politics to the scope of the blog, inspired by the election of a Labor Government at a national level. Rick Grounds
View all posts by rmgtravelsandfood →
This entry was posted in Travel and tagged Dijon, Dijon market, Salzburg, Sound of Music, Train travel in Europe. Bookmark the permalink.