Posted on May 3, 2014 by rmgtravelsandfood

Tuesday dawned with the promise of a cool but mostly dry day, ideal for touring. After a satisfactory breakfast at our hotel, we took the N974 south to explore the Côte de Beaune. We hoped for experiences that would make up for the stresses and disappointments of the previous afternoon and evening.

With the aid of our wine atlas pages, we first took ourselves to the locale of the Grand Cru vineyards that produce the fruit that is used to make some of the world’s most famous white wines. We even took a copycat photo of ourselves in front of the gateway of Montrachet, as Julian and Sara had done in 2011.

By now, we were badly in need of a bottle of water, so we drove up to the village of Meursault, which looked attractive and substantial from below. So it proved to be! A barrow-load of money was being spent on renovating the town square, local shops looked prosperous and there was no shortage of luxury cars in the main street. We began to settle in.

After some hesitation – us being Côte d’Or neophytes – we visited the retail premises of a wine producer, Domaine Jean Monnier & Fils. The manager showed himself to be, how shall I put this delicately, a WANKER. Once he had spent a few minutes explaining the inferior qualities of Australian wine – oh how I wished Julian was by my side – and the glories of his company’s wines, noting that we probably could not afford to ship any of his wines back home, he had something more important to do and left. An employee took us through a tasting of two whites and two reds. To me, the first three wines were too austere but we were both happy with the fourth, a Pommard Premier Cru from the favoured 2009 vintage. It is safely packed at the bottom of the suitcase.

Midday was approaching and my tummy was giving me instructions. Fill me! Soon!

We took a short wander, taking in two menus and more of the village’s attractive edifices, before returning to the cafe at which had enjoyed coffee earlier. Through an adjoining door was a restaurant and the menu appealed.  Soon we were seated and being waited on by an agreeable and confident young woman.

While we studied the menu, we received a simple plate of pieces of a light olive bread and slices of a tasty cured pork sausage. Maggie chose a main of veal tongue with a bearnaise sauce (photo next month). I chose a main of salmon and a dessert of tarte tatin. Our waitress helped us select a glass of white each, Maconnais as I recall, which was very enjoyable.

Before our mains arrived, we were given an amuse bouche of creamed cauliflower soup, with hints of bay leaf and some other herbs. The flavours and textures were remarkable; something to try chez nous. Maggie, something of an offal aficionado, was very happy with her choice. As for me, this was the best salmon dish of my life – soft, a lovely colour throughout and delicious, accompanied by a delicate sauce and velvety mashed potato. 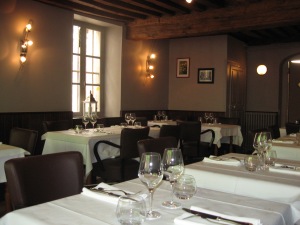 But the best was yet to come! We ate tarte tatin for the first time in 2009, at a busy cafe in Place des Voges. It was such a pleasure that we bought a scanpan of the right size and began to make an acceptable version at home. None of this prepared me for the sublime experience I had at Meursault – melt-in-the-mouth, delicate pastry and apple in sinful harmony. 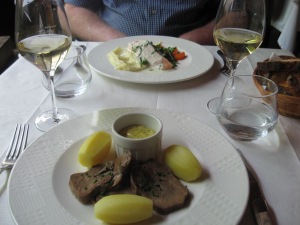 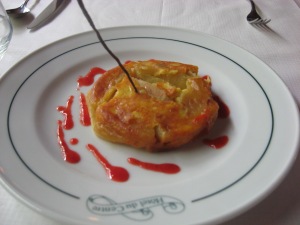 What a meal! We had begun to fall in love with Burgundy.

Maggie and I are both in our mid-60s and live in Melbourne, Australia. This blog is devoted to our shared passions for travel and fine dining at home. As cooks, we are skilful and adventurous within a framework of mainly traditional ingredients and techniques, and we aim to prepare nutritious food that looks good and tastes delicious. Our evolving repertoire is influenced by both our travels and Melbourne's vibrant food culture. While we are young enough, our priority travel destinations are overseas, although we do spend a few long weekends each year exploring parts of south-eastern Australia. As travellers, we are most comfortable with a combination of organised and independent touring. Our first overseas journey together was to Italy in the northern autumn of 2008. We later travelled in France (2009), Spain (2011), Singapore and Cambodia (2012/13). All trips from 2014 to 2016 are documented in this blog. When time allows, we will publish posts about our journeys - eight and counting - in 2017, 2018 and 2019
View all posts by rmgtravelsandfood →
This entry was posted in Eating out, Travel and tagged Dining in Côte d'Or, French food, Meursault. Bookmark the permalink.