Posted on July 6, 2020 by rmgtravelsandfood

Who doesn’t like to sit down to a bowl of some variety of chicken noodle soup? Surely, only a hard-hearted soul would not yield to its comforting flavours and textures!

In the Wikipedia entry for chicken noodle soup, a section headed ‘In different cultures’ has 25 entries – including at least one from every continent except Antarctica – plus a sub-section in the United States entry for canned soup.

Over the years, Maggie and I have used two quite different recipes, one for each of us. Maggie’s version was relatively uncomplicated, as she usually made it to cater for the young palates of her daughter’s children.

I preferred a more elaborate production, which was adapted from a recipe by a local chef with both Italian and French heritage. You can find my recipe here.

A few weeks ago, Maggie found another recipe, from a renowned Sydney chef, that she thought might appeal to both of us, including my liking for multiple steps in a cooking method.

The first half of the recipe involves poaching a whole chicken to yield both the stock and the meat for the soup. We by-passed most of that rigmarole, using a blend of a good-quality commercial stock and some stock we had made using the carcass of a rooster or cockerel. (The latter is another story, saved for a rainy day!) And, for the meat, we simply poached some pieces of skinless chicken.

Secondly, we made several changes and additions to the recipe for the soup itself. We were very happy with the end result, so much so that we have it twice more since then. Maggie will take the latest batch to her daughter’s house today, to serve to the now more sophisticated palates of those grandchildren, for a school-holiday lunch.

Here is our recipe. 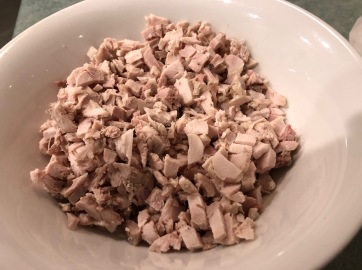 Peas, shredded spinach and part-cooked pasta added to the pot

If you happen to have an egg-white leftover from some other cooking activity, you could continue the colour theme by heating enough soup for two bowls and whisking the white through the hot liquid. This adds a lovely textural element as well.

Maggie and I are both in our mid-60s and live in Melbourne, Australia. This blog is devoted to our shared passions for travel and fine dining at home. As cooks, we are skilful and adventurous within a framework of mainly traditional ingredients and techniques, and we aim to prepare nutritious food that looks good and tastes delicious. Our evolving repertoire is influenced by both our travels and Melbourne's vibrant food culture. While we are young enough, our priority travel destinations are overseas, although we do spend a few long weekends each year exploring parts of south-eastern Australia. As travellers, we are most comfortable with a combination of organised and independent touring. Our first overseas journey together was to Italy in the northern autumn of 2008. We later travelled in France (2009), Spain (2011), Singapore and Cambodia (2012/13). All trips from 2014 to 2016 are documented in this blog. When time allows, we will publish posts about our journeys - eight and counting - in 2017, 2018 and 2019
View all posts by rmgtravelsandfood →
This entry was posted in Cooking and tagged chicken noodle soup, chicken vegetable soup. Bookmark the permalink.