Posted on July 12, 2020 by rmgtravelsandfood

Regular readers of this blog will know that Maggie and I enjoy preparing a meal of duck, starting from scratch with fresh duck legs or breast fillets. Happily for us, a supermarket close to our home maintains a good supply of these products, which come from a business called ‘Luvaduck’. Luvaduck was established in the 1960s in a country town located more than 350km from Melbourne.

Recently, the local supermarket was offering a discount on the price of fresh whole ducks. Not ones to resist such a temptation, we bought two. Over the following fortnight, we had four dinners of roast duck, two from each duck.

Now, a meal of roast duck is not something you can prepare in a hurry. After removing the oil glands around the ‘parson’s nose’ and pricking the skin all over with a skewer, you need up to 2 hours for cooking the duck at a low temperature – about 125C in a fan-forced oven – to render most of the fat. Then it is time to tip most of the rendered fat out of your pan, increase the temperature to 170C and roast the duck for a further 40 to 50 minutes, depending on its weight.

These photos show one of our ducks before and after the oil glands had been removed – not the prettiest of sights it has to be said – and the pricks made in the skin to help the rendered fat exude. 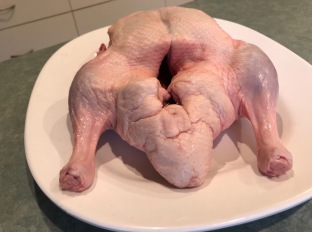 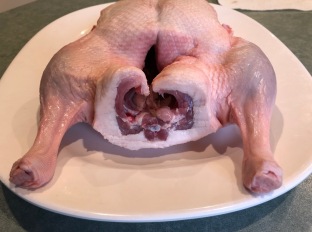 This photo shows you how the duck looks at the end of the first two hours in the oven. Hmm, it’s still a bit on the ugly side! 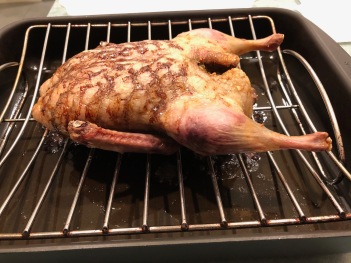 We flavoured and glazed each duck in a specific way. For the first one, we produced a stuffing that was quite rich in flavour.

Method for the stuffing

To glaze the duck in this case, we just dipped a basting brush into the fat in the bottom of the roasting pan and brushed the top and sides of the duck two or three times during the period of roasting at 170C.

These two photos show our bowl of stuffing and the finished duck, ready to carve.

And here is one of our dinner plates, including some fresh peas and a medley of carrot and beetroot baked ‘en papillote’.

For the second duck, we used a recipe we found on Australia’s largest recipe website. You will find the recipe here. Bear in mind that we used the method described above for how the duck was prepared for and treated in the oven.

As far as the ingredients for the stuffing are concerned, we followed the recipe fairly closely. However, we reduced the volume of most of them, except the almonds and orange zest, and we substituted French shallots for the onion and hand-crushed, toasted almond flakes for the slivered almonds.

In the case of the sauce, we stuck to the ingredient list and method faithfully. However, we found that we needed to use some cornflour to make the sauce thick enough for our liking.

These two photos show the duck after we had brushed it with the sauce and sprinkled it with raw almond flakes; followed by the finished duck. 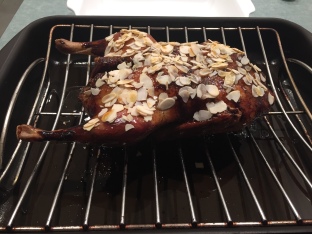 And here is one of our dinner plates. For this meal, the side dish comprised well-cooked brown rice, tossed with chopped prosciutto and some baby spinach leaves that had been wilted in some butter. In our experience, brown rice matches duck dishes very well, although white rice is probably a better match when the duck is cooked with flavours from South-East Asia.

Maggie and I are both in our mid-60s and live in Melbourne, Australia. This blog is devoted to our shared passions for travel and fine dining at home. As cooks, we are skilful and adventurous within a framework of mainly traditional ingredients and techniques, and we aim to prepare nutritious food that looks good and tastes delicious. Our evolving repertoire is influenced by both our travels and Melbourne's vibrant food culture. While we are young enough, our priority travel destinations are overseas, although we do spend a few long weekends each year exploring parts of south-eastern Australia. As travellers, we are most comfortable with a combination of organised and independent touring. Our first overseas journey together was to Italy in the northern autumn of 2008. We later travelled in France (2009), Spain (2011), Singapore and Cambodia (2012/13). All trips from 2014 to 2016 are documented in this blog. When time allows, we will publish posts about our journeys - eight and counting - in 2017, 2018 and 2019
View all posts by rmgtravelsandfood →
This entry was posted in Cooking and tagged duck recipes, roast duck. Bookmark the permalink.