Rooms at the top: our stay in the Umbrian towns of Orvieto and Todi (part 2)

Posted on June 30, 2020 by rmgtravelsandfood

Now to our three days in and around Todi.

Todi’s population is more than 16,000, a tick over 80% of Orvieto’s. However, it looks and feels very different to Orvieto, although not in any ways that mattered to Maggie and me.

Unlike Orvieto, Todi is not located on a train line or major highway, making it slightly less accessible for tourists and its buildings and piazzas, including its (former) cathedral, suffer a little by comparison. These small differences have something of a domino effect – there are far fewer high-end retail stores and hospitality businesses.

On the plus side, the pace of life is slower, the voices are mainly Italian and, by late afternoon, the piazzas are occupied by local families, enjoying the period of transition to evening and catching up with friends over a coffee or a glass of wine while their children play or ride their bicycles. And good, authentic food is not too hard for the visitor to find.

Here is some of what we ate at Vineria San Fortunato, a smart wine bar with an outdoor terrace set below the namesake church. 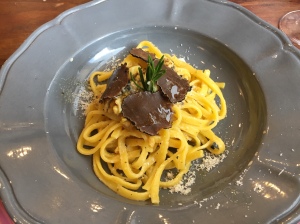 Another distinguishing feature of Todi is the surrounding countryside of gentle hills and valleys, dotted with olive groves, vineyards and more, interspersed with verdant woodlands, and so very typical of what gives the province of Umbria its nickname ‘the green heart of Italy’. 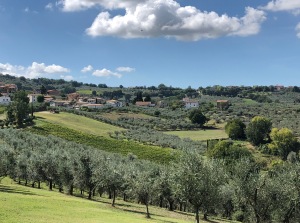 Embedded in this rich agricultural land are 37 villages that have been part of the Commune of Todi for many centuries, as depicted in this medieval ‘map’ displayed in the municipal museum.

This is the idyllic area where we were taken on a winery tour and, in a country house at the edge of one of the villages, for our pasta class.

The next photo looks across the countryside, with the famous town of Assisi lying on the distant slopes, followed by the reverse view, taken from the terrace bar of the hotel where we stayed during a visit to Assisi in 2008! 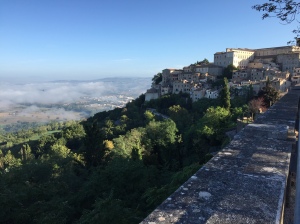 Here are some scenes of Todi itself. 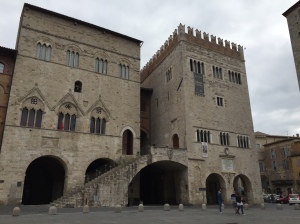 Our accommodation in Todi was Residenza D’Epoca San Lorenzo Tre. In structure and decoration, it was a slightly quirky, period-piece but it offered an expansive, high quality continental breakfast, Italian-style. You can find out more about the hotel here.

Another delightful feature of the building was its rooftop terrace, replete with comfortable seating and glorious views over-tiled roofs to the surrounding countryside. 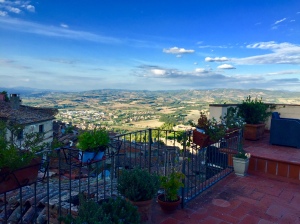 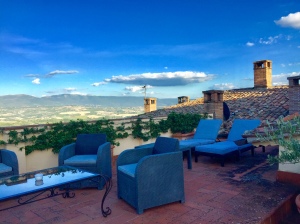 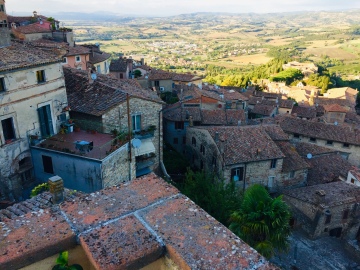 And, for Maggie, no stay in an Italian hilltop-town could be complete with yet another rendition of Tiramisu!

Maggie and I were both born in the early 1950s and we live in Melbourne, Australia. This blog is mainly devoted to our shared passions for travel and fine dining at home. Recently, I added Australian politics to the scope of the blog, inspired by the election of a Labor Government at a national level. Rick Grounds
View all posts by rmgtravelsandfood →
This entry was posted in Travel and tagged Orvieto, Todi, Umbria. Bookmark the permalink.

1 Response to Rooms at the top: our stay in the Umbrian towns of Orvieto and Todi (part 2)