Rooms at the top: our stay in the Umbrian towns of Orvieto and Todi (part 1)

Posted on June 30, 2020 by rmgtravelsandfood

In these two posts, I will tell you what we saw and did in and around the Umbrian hilltop towns of Orvieto and Todi late in September 2019.

We spent three nights in each of the towns and enjoyed them both very much. However, there are marked differences between the two.

Orvieto has a population of just over 20,000 and is a popular destination for international travellers, who go to view the late-thirteenth century duomo, explore some of the 1,200 underground caves, have a leisurely lunch at one of the numerous dining establishments or purchase items of the ceramic ware for which the district is renowned.

The town is quite accessible, as it lies on the main train and vehicle routes that run from Rome to Florence. In our case, we came by the train from the north, having entered Italy through the alps from France, thence to Milan for an overnight stopover, before taking trains to Florence and then to Orvieto.

One of Orvieto’s best-known landmarks it its cathedral (duomo), which has a very distinctive external appearance. Our hotel room looked directly across a piazza to the cathedral. 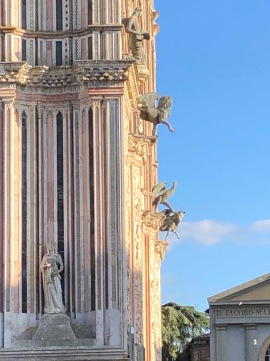 The view from our window

Although we are not at all religious, we do find some places of worship quite interesting to examine and explore. Inside, Orvieto’s doumo had some outstanding features, but it was not at all excessive. 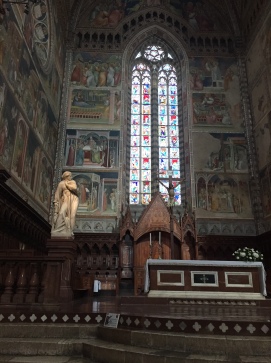 Exploring the town by foot takes you to a wide variety of interesting sights, including stunning views of the surrounding countryside. 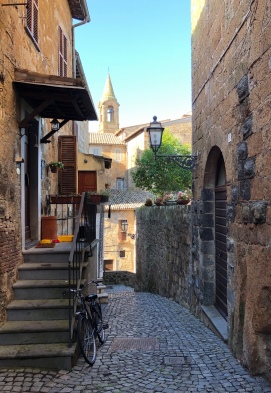 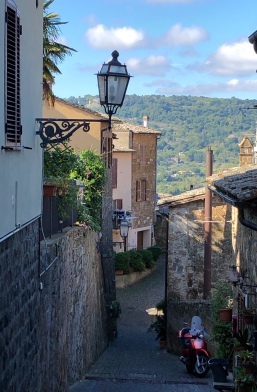 No visit to an Italian town is complete without a red Vespa! 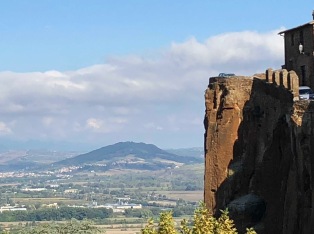 For a small fee, you may ascend to the top of the tower in this next photo, …

… and take in the panoramic views. 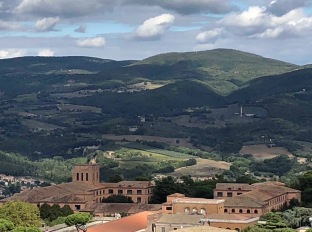 The vast majority of the tunnels below the town are privately owned. However, two are controlled by the municipality and are open for guided tours. The tours take you to sites where grains were ground into flour and olives were pressed for oil. 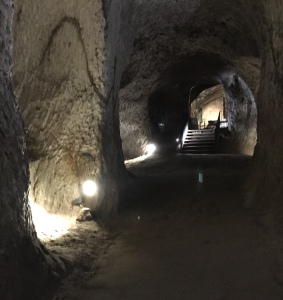 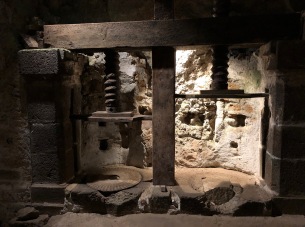 Other tunnel sections intersected with wells dug deep into the rock, while others were used to raise doves as a source of food. 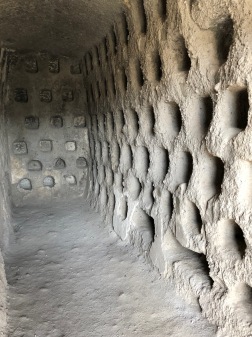 Orvieto’s popularity with international visitors is reflected in the number and quality of accommodation options, high-end retail stores and numerous cafes, bars, trattoria, enotecas and restaurants.

Several stores sell the colourful, locally-made ceramic goods. Browsing in one of them, we witnessed an American woman spending a five-figure sum on a collection of pieces and watching, somewhat anxiously, as the goods were carefully wrapped to be sent to her home address! 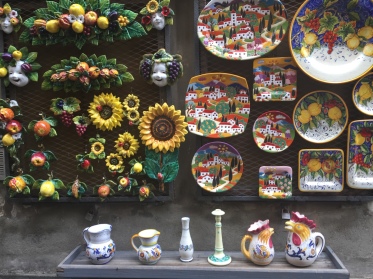 And here are some examples of Orvieto’s thriving food and wine scene. 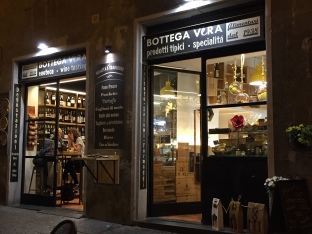 Maggie and I were both born in the early 1950s and we live in Melbourne, Australia. This blog is mainly devoted to our shared passions for travel and fine dining at home. Recently, I added Australian politics to the scope of the blog, inspired by the election of a Labor Government at a national level. Rick Grounds
View all posts by rmgtravelsandfood →
This entry was posted in Travel and tagged Orvieto, Todi, Umbria. Bookmark the permalink.