It’s hot and steamy, smells like hell, could cost you an arm or a leg … and they call it Wonderland!?

Posted on June 19, 2020 by rmgtravelsandfood

Maggie and I feel very fortunate, especially about our international travels through the years from 2008 to 2019. In October last year, we flew home from Rome at the end of our eighth visit to Europe, content in the belief that we might not visit that part of the world again, nor anywhere else requiring a long plane flight or considerable expense.

We are both 66 years old and we have spent a great deal of time and money on travels in distant countries. Now it is time for us to both tighten our belts a little and explore places in or near to our home country of Australia.

The arrival of the Covid-19 pandemic only heightened our sense of being fortunate. If it had hit six months earlier, our planned travels in France, Italy and Greece would have been cancelled, leaving us feeling somewhat bereft. And in February, we went on a cruise around New Zealand and across the Tasman Sea to Melbourne, one of the last virus-free cruises of early 2020. Lucky us!

Of course, we can both think of quite a few far-away places we’d be delighted to explore. Top of my list would be Yellowstone National Park in the United States, with its incredible variety of outstanding features: geology, topography, plants, wildlife, scenery, the seasonal changes and so on. So significant is this great park, the first national park in the USA, that National Geographic devoted its entire May 2016 edition to it. I know this because I came across it in my dentist’s waiting room, borrowed it and read it from cover to cover!

As most readers would know, one of the features that make Yellowstone so special are its geothermal formations. Well, New Zealand is also home to some remarkable geothermal activity and we got to explore some of it in February, on a day’s outing from our cruise ship (Cunard’s Queen Elizabeth). Here is some of what we saw.

The first site we visited was a large thermal mud pool. It was fascinatingly hideous, as illustrated in this short video clip.

The mud pool was a mere warm-up act for what followed – the Wai-o-tapu thermal wonderland, which is home to the largest area of surface thermal activity within the Taupo volcanic zone in the centre of New Zealand’s north island. (Wai-o-tapu means ‘sacred waters’ in the Maori language.)

We spent a couple of hours following some of the trails around Wai-o-tapu, marvelling at the variety of geothermal formations.

Here is a busy stream of heated water, which gave off sulphurous vapours.

Next, a collapsed site from which ‘rotten-egg’ gas was emanating:

This group of pools contains unrefined crude oil. In the early 1900s, they were skimmed to extract fuel for kerosene lanterns. Imagine doing that for a living. Ugh!

The next group of photos were taken from various viewpoints around a couple of large pools. Amazing colours were generated by a variety of minerals and the heat. 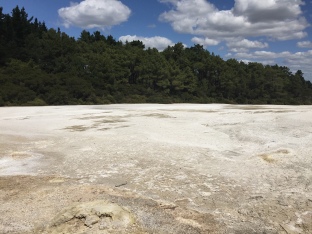 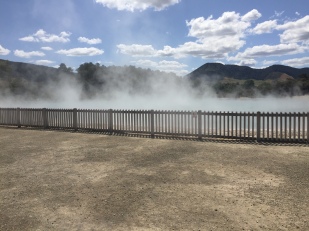 Holes in the walls of this collapsed crater are home to three species of small birds. The heat from below helps to keep the birds warm in winter and to incubate their eggs.

The last stop on our track was this large pool, with its attractive chartreuse tones. But its virtues are only skin-deep – with a pH of 2, it would made short work of an arm or leg, should you be foolish enough to test the water! 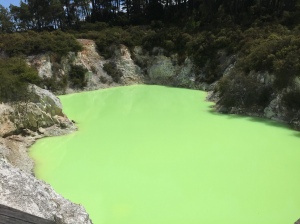 We plan to visit New Zealand again in the years ahead, once, if not twice. However, Maggie’s nostrils have had their fill of the country’s geothermal wonders, so we will turn our attention to the ‘shaky isles’ other scenic and cultural attractions.

Maggie and I are both in our mid-60s and live in Melbourne, Australia. This blog is devoted to our shared passions for travel and fine dining at home. As cooks, we are skilful and adventurous within a framework of mainly traditional ingredients and techniques, and we aim to prepare nutritious food that looks good and tastes delicious. Our evolving repertoire is influenced by both our travels and Melbourne's vibrant food culture. While we are young enough, our priority travel destinations are overseas, although we do spend a few long weekends each year exploring parts of south-eastern Australia. As travellers, we are most comfortable with a combination of organised and independent touring. Our first overseas journey together was to Italy in the northern autumn of 2008. We later travelled in France (2009), Spain (2011), Singapore and Cambodia (2012/13). All trips from 2014 to 2016 are documented in this blog. When time allows, we will publish posts about our journeys - eight and counting - in 2017, 2018 and 2019
View all posts by rmgtravelsandfood →
This entry was posted in Travel and tagged New Zealand. Bookmark the permalink.

2 Responses to It’s hot and steamy, smells like hell, could cost you an arm or a leg … and they call it Wonderland!?