Q: Why did the chicken legs cross the road quickly?

Posted on August 19, 2019 by rmgtravelsandfood

A: So they wouldn’t be late for dinner. My dinner!

Once upon a time, in a faraway land, a local newspaper invited me to nominate my ‘signature dish’, explain my choice and give them the recipe. It was 2003, and I had just become Chairperson of a community organisation that promoted the food and wine industries of the Great Southern, a leading agricultural region of Western Australia.

The dish I nominated was Coq au vin. I chose it because it was my go-to dish when hosting a dinner party and because I could obtain most of the ingredients fresh and directly from local producers, including premium cool-climate red wine and the first brand of free-range chicken produced in sizeable quantities in Western Australia.

I’ve never put that recipe on this blog, but only because, by the time I was writing posts about cooking, I had discovered the joys of making coq au vin with rooster rather than chicken. The story of that dish is here.

Now, jump to late 2016, when I shared the story of how Maggie and I had prepared a ‘deconstructed’ version of coq au vin using a whole spatchcock. We have used that method once or twice each year thereafter. But this winter has brought another change. We are very much in ‘streamlining’ mode, as we count down the months – 15 to 20 of them – before we move from our modest home to an apartment in a low-level complex being constructed not far from where we live now.

In the chicken department, ‘streamlining’ means that all of our cold-weather meals of chicken are being prepared using the ‘Maryland’ cut, ie the leg, or thigh-plus-drumstick. As well as being economical and flavoursome, Marylands are versatile; they can be roasted or they can be jointed into two pieces and braised or pot-roasted.

Our varieties of braised chicken Maryland dishes have include another simplified version of coq au vin. However, unlike our so-called ‘deconstructed’ version, this time we have taken pains to record quantities of ingredients as we go, to establish a recipe which will produce a consistently delicious meal.

Here is how we plate it up, followed by the recipe, which produces enough for two generous dinner servings. 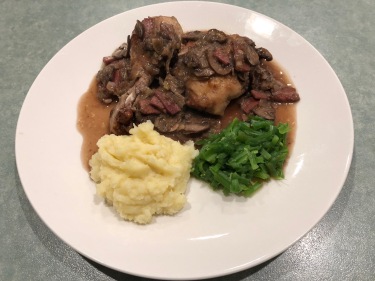 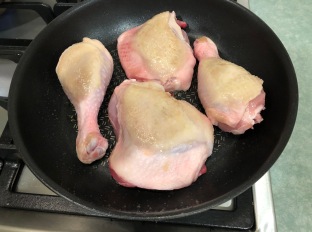 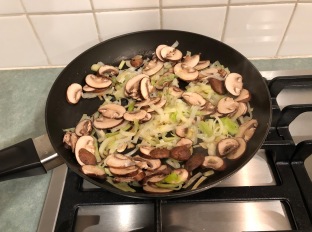 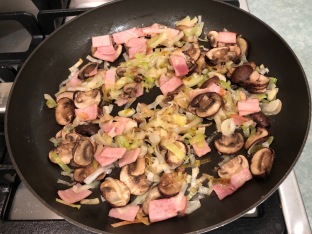 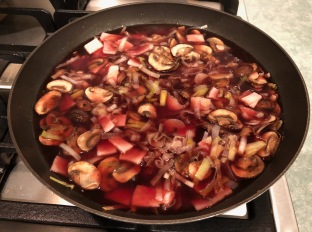 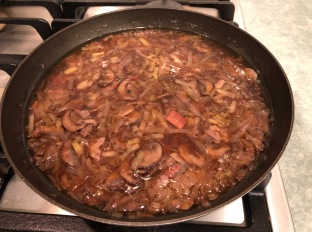 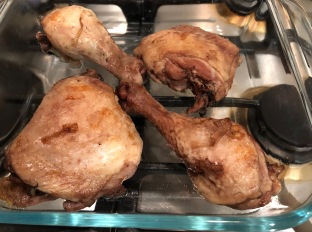 Maggie and I are both in our mid-60s and live in Melbourne, Australia. This blog is devoted to our shared passions for travel and fine dining at home. As cooks, we are skilful and adventurous within a framework of mainly traditional ingredients and techniques, and we aim to prepare nutritious food that looks good and tastes delicious. Our evolving repertoire is influenced by both our travels and Melbourne's vibrant food culture. While we are young enough, our priority travel destinations are overseas, although we do spend a few long weekends each year exploring parts of south-eastern Australia. As travellers, we are most comfortable with a combination of organised and independent touring. Our first overseas journey together was to Italy in the northern autumn of 2008. We later travelled in France (2009), Spain (2011), Singapore and Cambodia (2012/13). All trips from 2014 to 2016 are documented in this blog. When time allows, we will publish posts about our journeys - eight and counting - in 2017, 2018 and 2019
View all posts by rmgtravelsandfood →
This entry was posted in Cooking and tagged Chicken in red wine, Coq au vin, Coq au vin recipe. Bookmark the permalink.

2 Responses to Q: Why did the chicken legs cross the road quickly?