A dish to crow about?

Posted on July 30, 2014 by rmgtravelsandfood

This could be a long, slow-cooked post but that’s only fitting. After all, it took Maggie and I three days to turn a rooster into a meal of my favourite poultry casserole – Coq au vin!

First, some personal, historical context. For Christmas 1985, good friends 0f mine – yes, Susan, it was you and Bill – gave me a French cookbook and, in doing so, expressed the hope that they would have the opportunity to share some dishes prepared using the book’s recipes.

A few months later, I began to live with a vegetarian (the mother of my son). All meat except fish was off the menu … until she developed a craving for chicken during the pregnancy. So, we ate chicken occasionally, either a roasted whole bird from a fast-food outlet, supplemented by fresh home-made salads, or a chicken curry, usually accompanied by spicy vegetarian dishes.

We separated when my son was nine years old and I began to reintroduce meat dishes to my repertoire. In that French cookbook, I found a recipe for Coq au vin, a dish my mother had made from time to time. I was happy enough with the result, even more so when I developed the habit of cooking it at least a day in advance and removing the solid layer of fats from the surface of the jellied juices.

Over the next few years, I continued to adapt the recipe to suit my palate and cooking style, to the point where I chose it as the centrepiece of a meal I cooked to celebrate my 50th birthday.

Then I returned to Melbourne after 30 years in Western Australia and, within a few months, Maggie and I had established a home together. Coq au vin was one of the first dishes we cooked together, remained a favourite and continued to evolve.

Jump to May 2014 and the city of Beaune, the heart of the fabled Cote d’Or in Burgundy, where I had an amazing plate of Coq au vin (as described in my first post about La Grilladine restaurant). Rather than falling of the bone, as often happens when I make a chicken casserole, the meat was firm, yet not chewy.  Secondly, the jus had all the familiar flavours but it was clear and devoid of vegetables, etc. I was intrigued and I resolved to try to produce something similar after we returned to Melbourne.

By chance the next day, I found a postcard that featured a Coq au vin recipe. It was written in French but my travel-eat-and-drink French was up to the task; not that it was difficult to recognise that the main ingredient was not a chicken but a rooster, ie un coq! (The afore-mentioned French cookbook had chicken as the poultry but that might have been to make it palatable to English-speaking home cooks.)

Last Sunday we served that promised dish of Coq au vin to ourselves and our favourite neighbours. We were pretty proud of the result, as shown in the second photo. Now for the story of how we made it.

Here is the list of ingredients, starting with the rooster we sourced from John Cester’s at Prahran Market:

And here is the method. 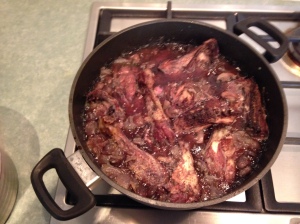 After the fats have been removed

Solids strained from the sauce

Was it worth all that time and effort? Good question! Maggie and I are income-poor but time-rich, so we are happy to spend numerous hours each week preparing delicious food. I can think of dishes which deliver us more bang for the time-buck. That said, having done this once, we would work more efficiently next time. And, as our neighbours agreed, it was a truly attractive and delicious meal.

Maggie and I are both in our mid-60s and live in Melbourne, Australia. This blog is devoted to our shared passions for travel and fine dining at home. As cooks, we are skilful and adventurous within a framework of mainly traditional ingredients and techniques, and we aim to prepare nutritious food that looks good and tastes delicious. Our evolving repertoire is influenced by both our travels and Melbourne's vibrant food culture. While we are young enough, our priority travel destinations are overseas, although we do spend a few long weekends each year exploring parts of south-eastern Australia. As travellers, we are most comfortable with a combination of organised and independent touring. Our first overseas journey together was to Italy in the northern autumn of 2008. We later travelled in France (2009), Spain (2011), Singapore and Cambodia (2012/13). All trips from 2014 to 2016 are documented in this blog. When time allows, we will publish posts about our journeys - eight and counting - in 2017, 2018 and 2019
View all posts by rmgtravelsandfood →
This entry was posted in Cooking, Eating out and tagged chicken recipe, Cooking rooster, Coq au vin, La Grilladine, Melbourne food. Bookmark the permalink.

2 Responses to A dish to crow about?