Posted on December 20, 2014 by rmgtravelsandfood

Maggie and I both enjoy ham. Through much of the year, we buy two types of sliced ham – one lightly smoked, branded as Grandmother Ham, with a lovely texture that is perfect for sandwiches; the other, a triple-smoked ham that goes well in such things as omelettes and savoury scones, where the ham has to compete with the flavour of other ingredients. Numerous other Australians do likewise.

Come Christmas time, the business of buying ham becomes much more earnest in our part of the world. Yes, there is strong demand for turkey, prawns, oysters, chicken and roasting pork, not forgetting crayfish/lobster which is fetching more than $120 per kg, thanks to the burgeoning middle-class in China! But it’s ham that is the headline item on the menu in hundreds of  thousands of households across the country. Consequently, there are scores of different hams produced just for the festive season and, as well as what the supermarkets offer at lower price points, every butcher and delicatessen of any substance will offer ‘gourmet’ legs of ham on the bone to their customers, ranging in price from $15/kg to upwards of $40/kg.

We can’t always justify having a whole ham in the house for the festive season but, this year, we have organised Maggie’s 18-day break from work so that we will have plenty of time to enjoy some premium ham. So, Maggie proposed that we see what the team at Ashburton Meats could supply and, yesterday, we collected the ham we had ordered, which came from Otway Free-range Pork via their preferred smoker, at a reasonable price.

Here’s how we glazed and baked the ham to finish it off to our liking.

Firstly, Maggie removed the skin and used a sharp knife to score the fat in a diamond pattern.

The glaze began with 1/2 cup of orange marmalade, 1 tbsp dark brown sugar and 2 tbsp Dijon mustard. These were mixed together well in a saucepan, then we added 1/4 cup of fresh orange juice and brought the glaze to the boil and let it simmer for 3 minutes. 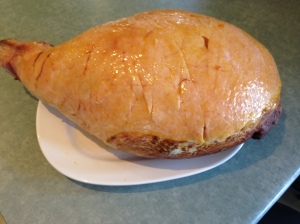 Meanwhile, we pre-heated the oven to 180C (fan-forced). You should vary the temperature according to how your own oven behaves, as it is important to avoid cooking the ham too quickly and burning the sugar component of the glaze. Sit the ham on a rack over a baking dish and add water to the dish to a depth of 2cm. Brush the glaze generously over the fat and bake for up to 40 minutes, brushing more glaze over the ham every 10 minutes.

The ham was superb. Maggie says “it’s what we’ve been looking for”!

Maggie and I are both in our late 60s and live in Melbourne, Australia. This blog is devoted to our shared passions for travel and fine dining at home. As cooks, we are skilful and adventurous within a framework of mainly traditional ingredients and techniques, and we aim to prepare nutritious food that looks good and tastes delicious. Our evolving repertoire is influenced by both our travels and Melbourne's vibrant food culture. From 2008 to early 2020, our priority travel destinations were overseas, although we have always spent a bit of time each year exploring parts of Australia. Our first overseas journey together was to Italy in the northern autumn of 2008. We later travelled in France (2009), Spain (2011), Singapore and Cambodia (2012/13). Most of our international adventures from 2014 to 2020 are covered in this blog. We have now reached a time in our lives when the prospect of long flights to distant places are unappealing, so we will travel mainly within Australia or to countries that are close to home.
View all posts by rmgtravelsandfood →
This entry was posted in Cooking and tagged Ashburton Meats, baked ham, Christmas food, glaze for ham, leg of ham, Otway Free Range Pork. Bookmark the permalink.