So, you’ve heard that Prague is a beautiful city, one of the most visit-worthy in Europe, if not the world. Only one problem with that information – countless thousands of other will-be-travellers have heard the same story. They have voted with their feet and those feet are taking them across the Charles Bridge from one historic side of the Vitava River to the other.

That is the bad news.  The good news is that the other jewel in the Czech Republic’s tourism crown, the town of Cesky Krumlov, is not yet on everyone’s ‘must visit’ list and its relatively modest supply of hotel rooms and eating establishments will act as a limiting factor on visitor numbers for the time being.

Enough of the broad generalisations! Let me tell you what we actually saw and did.

We reached our hotel in Prague late in the afternoon, after a scenic ride from Dresden through hilly countryside. By the time we sat down to the included hotel dinner, we had discovered that wine is expensive in the Czech Republic but beer is cheap – I imagine that the politics of taxing the nation’s renowned beer supply is a factor!

A disappointing and, for we wine drinkers, expensive dinner was followed by the optional ‘Prague by night’ outing, led by a local guide, George. A view over the city from the Prague Castle site was followed by a stroll down narrow cobbled streets between a series of elegant buildings. Our walk ended at a mini ‘train’ – a small vehicle on tyres pulling two ‘carriages’ along the road – that bounced us around on a journey through persistent drizzle over more cobbled streets to the old centre of the city. Then we were transferred to a river boat for a cruise along the Vitava to view various grand edifices, including the Charles Bridge. Although it wasn’t as windy and cold as it had been during our Danube cruise in Budapest, the persistent light rain did take the shine off the outing.

The next morning brought dry weather for our included sightseeing tour. An exploration of Prague Castle was followed by a visit to the adjoining St Vitus’ Cathedral, a vast and handsome Gothic structure. Then George led us down the hill, accompanied by his entertaining and informative commentary, to reach Charles Bridge. By night it had been very attractive, even in the rain; late on a warm morning, it was swarming with visitors just like us, which made it difficult to see, let alone appreciate, its renowned charms. The balance of this outing brought more of the same, passing innumerable centuries-old buildings occupied by designer brands, souvenir shops or currency changers, as well as all the usual fast-food suspects.  By the time we reached our last stop – the justly-famous astronomical clock – our appetite for Prague had been blunted.

We removed ourselves from the pricey heart of the old quarter and sat down to a kind of fusion meal – baked pork knee accompanied by fried rice – washed down with a glass of pilsener. (Even a couple of wine-lovers can appreciate the favoured local drop!) We devoted the afternoon to writing postcards, emails and the like; a stroll through St Wenceslas Square; and a little shopping for water and other travel essentials. Our day ended happily with a much better hotel meal; my main course of beef with a cream sauce was so delicious that I have searched cyberspace for a recipe. And I have found one!

The weather was even finer the next day, when our coach took us from Prague to Cesky Krumlov, a UNESCO-listed medieval town in the Czech region of Bohemia. The tour group dispersed for a lunch-or-shop break around the central square – more cobble stones to challenge Maggie’s dicky knee – before reassembling for a walk across the Vitava and up the hill to yet another fortified castle.

An informative local guide took us through the main rooms of the castle; it was relatively small, which actually made it easier to appreciate how it would have functioned over the centuries of its use. After we had taken photographs of the sunny scene below the castle, we all made our way back to our hotel, to check in and freshen up. 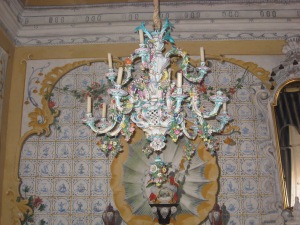 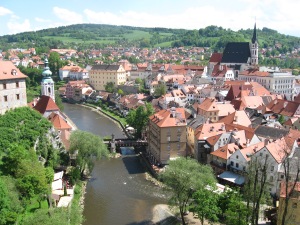 The Hotel Ruze is a bit unusual on the inside, having been built as a monastery, and going by what we saw and others told us, the size and layout of the guest rooms is quite irregular. The location, however, is ideal, just a few minutes by foot from the town square.

We had a pleasant afternoon of strolling, shopping – a brooch set with local garnets in Maggie’s case – cyber travel, postcard writing and wine sipping. The day ended with a disastrous included dinner which was probably unforeseeable. I will save the rant for a later post reviewing the tour as a whole.

Overall, we found Cesky Krumlov to be a delightful town, well worth a visit. As for Prague, my advice is that you either tour it by night – only half kidding – or schedule your visit for early Spring or late Autumn and take warm clothes.

Maggie and I are both in our mid-60s and live in Melbourne, Australia. This blog is devoted to our shared passions for travel and fine dining at home. As cooks, we are skilful and adventurous within a framework of mainly traditional ingredients and techniques, and we aim to prepare nutritious food that looks good and tastes delicious. Our evolving repertoire is influenced by both our travels and Melbourne's vibrant food culture. While we are young enough, our priority travel destinations are overseas, although we do spend a few long weekends each year exploring parts of south-eastern Australia. As travellers, we are most comfortable with a combination of organised and independent touring. Our first overseas journey together was to Italy in the northern autumn of 2008. We later travelled in France (2009), Spain (2011), Singapore and Cambodia (2012/13). All trips from 2014 to 2016 are documented in this blog. When time allows, we will publish posts about our journeys - eight and counting - in 2017, 2018 and 2019
View all posts by rmgtravelsandfood →
This entry was posted in Travel and tagged Cesky Krumlov, Insight Vacations, Prague. Bookmark the permalink.