Berlin! Where to begin?

I will start with a dog, a Golden Retriever kind of hund, asleep at its owner’s feet in the lobby bar of the Marriott Hotel in Berlin; note the water bowl also. As some of you know, this photo could not be taken in Australia. Our food safety rules maintain a cast-iron curtain between pets and any food – or beverage – that is for sale. But in Europe, where the EU regulates compulsively, dogs are welcome to accompany their owners into cafés, restaurants, bars – you name it! And the dogs behave impeccably; better, in fact, than some of the two-legged animals in their vicinity. 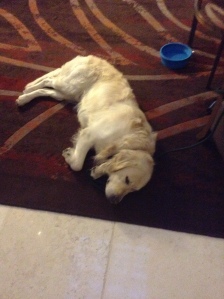 So, to the serious business of being on tour.

It was dry and mild when we arrived in Berlin. This was blog-worthy, trust me! Once settled in our hotel room – a ritual exercise in re-cluttering – we ventured briefly into the Tiergarten. This was soon followed by our favourite ritual – finding our table for the evening meal; the mission was quickly accomplished when Maggie spotted a restaurant behind a line of silver birch trees, just two minutes from our hotel. I will say more about the restaurant in a later post; suffice to say for now that we returned the next night and 13 other members of our tour group followed our lead. 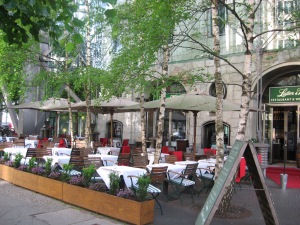 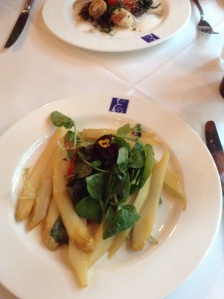 Our second day began with a guided tour around the central districts of Berlin by coach. This became a bit of an adventure – many streets were closed for a weekend of cycling races – but Janos, our irreproachable driver, and Vivienne, our local guide managed to plot a route to all the intended sites. Essentially, it was classic sight-seeing but Vivienne provided plenty of information and there were regular stops for photo and comfort opportunities.

By the time we returned to the Marriott, Maggie and I were committed to testing the veracity of one of Vivienne’s statements:  the delicatessen at the Ka De We department store is reputed to be the largest in Europe. One train ride, ten oysters and two glasses of wine later, we could neither confirm nor deny. However, we can vouch for the fact that there are three oyster bars, one prawn bar and, on a Saturday, many wines available for tasting!

Next morning, we headed south towards Dresden, indebted to Janos once more for finding a way out of the maze of roadblocks. En route, our Tour Director, Monika played a colleague’s recorded account of the life of Hitler; this turned out to be a case of TMI, triggering mutinous mutterings within the ranks. At our next pit stop, I had a gentle chat with Monika; as always, she handled things intelligently and with good heart.

The return to normal programming was consolidated by Ingrid, the local guide for our visit to Dresden. Ingrid provided us with an irresistible cocktail of interesting information and humour; in the case of the latter, nobody was spared! We left Dresden with a very positive impression and the rest of the drive to Prague was upbeat. Phew! 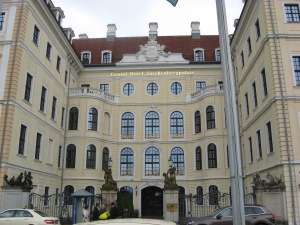 Maggie and I are both in our mid-60s and live in Melbourne, Australia. This blog is devoted to our shared passions for travel and fine dining at home. As cooks, we are skilful and adventurous within a framework of mainly traditional ingredients and techniques, and we aim to prepare nutritious food that looks good and tastes delicious. Our evolving repertoire is influenced by both our travels and Melbourne's vibrant food culture. While we are young enough, our priority travel destinations are overseas, although we do spend a few long weekends each year exploring parts of south-eastern Australia. As travellers, we are most comfortable with a combination of organised and independent touring. Our first overseas journey together was to Italy in the northern autumn of 2008. We later travelled in France (2009), Spain (2011), Singapore and Cambodia (2012/13). All trips from 2014 to 2016 are documented in this blog. When time allows, we will publish posts about our journeys - eight and counting - in 2017, 2018 and 2019
View all posts by rmgtravelsandfood →
This entry was posted in Travel and tagged Berlin, Dresden, Insight Vacations. Bookmark the permalink.