Posted on June 2, 2014 by rmgtravelsandfood

Our second morning in Cesky Krumlov brought the promise of warm, fine days to close our tour. As Janos, a performer of numerous minor driving miracles, pointed our coach in the direction of Austria, any memories of the cool, showery early days of the trip were banished to a distant past. Although some of our party were feeling the pinch of a busy schedule – it’s a tour not a holiday, as they remind us – there was a pervasive feeling that the journey would end on a high.

Our route to Vienna was a blend of motorway and lesser roads, including an enjoyable stretch through the Wachau Valley alongside the majestic Danube River. Here we saw numerous large cruise vessels, sun-drenched vineyards and medieval castles in various states of disrepair.

When we reached Vienna, Janos was able to park the coach outside the Albertina. After a lunch-break at the basement-level Rosenberg rapid-food establishment, we were joined by our local guide, Sylvia. We did a circuit of the ring of boulevards, laid out in the 19th century along the line of the former city walls, before heading out to the Schonbrunn Palace, which was constructed in the 18th century as the Hapsburg empire’s winter palace. Our visit to the main sections of the palace was very satisfying, not unlike visiting a less over-the-top Versailles and without the I-must-see-this-now-just-let-me-through throng of humanity.

From Schonnbrunn, we returned to the centre of Vienna to check in to our hotel, a Hilton  located opposite the Stadt Park, the largest public gardens in the city. Except for the business-class fee for in-room wi-fi access, we felt very at home in this hotel. This was confirmed by the service we received that afternoon and thereafter in the lounge bar.

We had opted out of the evening optional dinner, based on a pre-tour Google inspection, and found our way to a lovely meal at Gasthaus Pfudl (visit Tripadvisor for our review).

Next morning, we joined the optional tour of Brataslava, the capital of Slovakia, located only a short distance from Vienna. It was an interesting and relaxed experience of yet another city that has prospered since the end of Soviet domination. In the oldest quarter of the city, the courtyards behind groups of buildings are, in contrast to Paris, open to the public and contain many thriving businesses. The guided walk ended temptingly close to a renowned cafe; we yielded to the daily special – a glass of bubbly, a colourful cake and a coffee. We love travelling in Europe! 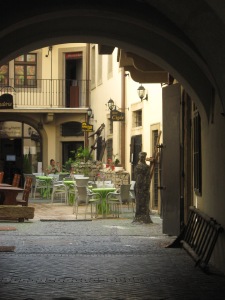 Back in Vienna, we took lunch at an Italian bistro a few doors from our hotel before tackling that dreaded end-of-tour task – preparing our suitcases for air travel. Our marriage survived this challenge and we happily joined the rest of the group for our last evening of the tour. This began with an excellent concert of music, songs and ballet performed by the Wiener Residenzorchester; the first half was given over to Mozart, the second to Strauss. Our dinner was served in the same building, in a room where Mozart had given his first performance to members of the Imperial family. Such is the life of those who travel on well-operated coach tours!

Most members of the tour party had left to fly home by the time we went down to breakfast the next morning. We had the whole day left to see more of Vienna; our main destination was the the Museum of Art History, one of two grand edifices that were built across the ring from the Hofburg Palace to house the Hapsburgs’ vast collections of art, fine craftware, antiquities, and natural history. Fittingly, a grandiose statue of Empress Maria Theresa sits between the two museums. We took two of our travelling companions with us for the ride on the U-train network; it took all of my map-reading skills to get us in and out of there.

We then used our free-of-charge checkout extension to 3pm to shower and change clothes before heading back to Gasthaus Pfudl for a very late lunch, including one last plate of Wiener schnitzel for Maggie and a delicious cheese platter to share.

Palates sated and luggage retrieved, we made our way to Vienna airport by train, a non-stop journey that departed from Landstrasse station only five minutes walk from our hotel. It runs every half hour from about 6am until late evening, taking only 16 minutes for a cost of 12 euros each. We took the 6.30pm train and it was close to full.

So, goodbye to Europe once again, after another thoroughly satisfying visit. With any luck, we will be back there in less than 18 months’ time.

Maggie and I are both in our late 60s and live in Melbourne, Australia. This blog is devoted to our shared passions for travel and fine dining at home. As cooks, we are skilful and adventurous within a framework of mainly traditional ingredients and techniques, and we aim to prepare nutritious food that looks good and tastes delicious. Our evolving repertoire is influenced by both our travels and Melbourne's vibrant food culture. From 2008 to early 2020, our priority travel destinations were overseas, although we have always spent a bit of time each year exploring parts of Australia. Our first overseas journey together was to Italy in the northern autumn of 2008. We later travelled in France (2009), Spain (2011), Singapore and Cambodia (2012/13). Most of our international adventures from 2014 to 2020 are covered in this blog. We have now reached a time in our lives when the prospect of long flights to distant places are unappealing, so we will travel mainly within Australia or to countries that are close to home.
View all posts by rmgtravelsandfood →
This entry was posted in Eating out, Travel and tagged Brataslava, Concerts in Vienna, Gasthaus Pfudl, Insight Vacations, Schonbrunn Palace, Vienna. Bookmark the permalink.