Posted on August 3, 2020 by rmgtravelsandfood

From time to time on this blog, I have mentioned one or the other of my two friends, Bill and Susan, who live in Perth, the capital city of the Australian state of Western Australia.

I have known Susan and Bill since 1975 and 1981, respectively. Since their marriage in 1984, we have shared home-cooked meals accompanied by a generous amount of wine on numerous occasions, and such events long-ago became a key plank of our relationship. If anything, that shared interest in pleasures of the palate has grown stronger with age, particularly as it applies to Bill and me, both of us having more free time on our hands these days.

Anyway, a few weeks ago, Bill sent me a link to a Youtube video in which an Australian couple – one a renowned restaurant reviewer, the other a well-trained cook – demonstrate how to prepare a dish of fish pie (see below). Turns out Bill had decided to have a go at making one for he and Susan to share and, sure enough, I was soon treated to a video clip of Bill serving it up.

I took all this as both a generous act of sharing a source of inspiration and, not that a middle-aged man like me would ever be competitive about cooking, a challenge!

As it happened, Maggie had a couple of sheets of puff pastry lying idle in our freezer, leftover from the pack we bought to make our annual batch of Beef Wellington. Here is how it turned out in 2020, accompanied by a modest heap of wilted spinach.

So, Maggie and I had a good look at the instructional video and decided we’d be happy to give it a go, noting that the method included a true, classic béchamel sauce, in which milk is infused with the flavours of a bay leaf, black peppercorns and slices of white onion.

We decided to vary the recipe by replacing some of the fish with scallops, in part to reflect the Tasmanian heritage on my late father’s side. Scallop pie is a long-established part of the diet of most Tasmanians and, in the historic small town of Ross, there is actually a business called the Tasmanian Scallop Pie Company!

A couple of suburbs away from our home, there is a shopping and hospitality precinct famed for being a centre of all things Greek and it is a popular destination for home-cooks wanting to buy fresh seafood and lamb. That is where we bought our two main pie ingredients – some firm-fleshed white fish and some beautiful scallops, all so fresh that the only aroma was that of sea water.

In the end, we used 400g of the fish and 200g of the scallops. Maggie cleaned the scallops and separated their roe from their flesh, before scattering them around the two pieces of fish in an ovenproof pan. 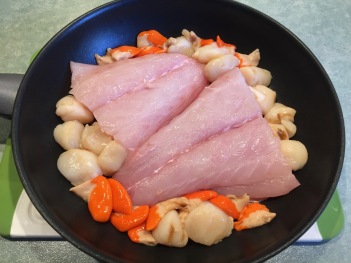 Meanwhile, we had prepared the milk for our béchamel sauce, bringing it to a gentle simmer, turning the heat off and leaving it to infuse until it was lukewarm. We strained the milk over the seafood, covered it with the recommended damp sheet of baking paper and placed the pan over a low heat until it began to simmer. 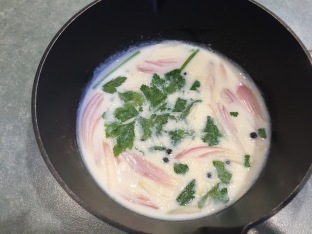 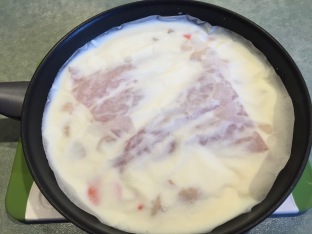 Once the seafood had finished cooking in the warm milk, we removed it and finished making the béchamel sauce, including the addition of some thickened cream off the heat.

The fish, which had been flaked into chunks, and the scallops were returned to the pan and smothered in the sauce.

Maggie then covered it with a sheet of pastry, trimmed to size, cut an opening in the centre and brushed it with the seasoned egg yolk.

And here is how it looked after being baked at 170C for 40 minutes.

We served it accompanied with some tender, fresh peas, a winning combination IMHO. Remarkably, given the extended period of poaching and baking, the scallops were as tender as my father would have wished, well, insisted upon, actually!

We’ll be making this one again. Thanks Bill!

Maggie and I are both in our late 60s and live in Melbourne, Australia. This blog is devoted to our shared passions for travel and fine dining at home. As cooks, we are skilful and adventurous within a framework of mainly traditional ingredients and techniques, and we aim to prepare nutritious food that looks good and tastes delicious. Our evolving repertoire is influenced by both our travels and Melbourne's vibrant food culture. From 2008 to early 2020, our priority travel destinations were overseas, although we have always spent a bit of time each year exploring parts of Australia. Our first overseas journey together was to Italy in the northern autumn of 2008. We later travelled in France (2009), Spain (2011), Singapore and Cambodia (2012/13). Most of our international adventures from 2014 to 2020 are covered in this blog. We have now reached a time in our lives when the prospect of long flights to distant places are unappealing, so we will travel mainly within Australia or to countries that are close to home.
View all posts by rmgtravelsandfood →
This entry was posted in Cooking and tagged Fish pie, Scallop pie, Seafood pie. Bookmark the permalink.