Posted on September 2, 2019 by rmgtravelsandfood

It took me until well into my 40s to develop a taste for fresh asparagus, mainly because the only asparagus spears I ever knew about came in a tin and I didn’t like those one little bit. Fortunately, I spent a few years at the beginning of this century living in an asparagus-growing region, soon after I had learnt how to make hollandaise sauce. Since then, I have been making up for lost time and I always look forward to late winter, when the first fresh spears appear on our greengrocer’s shelves.

Maggie, on the other hand, has always liked fresh asparagus and has fond memories of sharing some fresh out of the pot with her maternal grandmother, who taught her to appreciate the plumpest of the available spears, served simply with butter, salt and white pepper. So, Maggie is in charge of selecting the fat green spears for our table, while I take responsibility for cooking them.

On the strength of some particularly tasty early-season asparagus, I suggested we consider make an asparagus soup. I began my search for a recipe by looking to see if Felicity Cloake had published one in her regular ‘How to cook the perfect …’ in The Guardian newspaper. Indeed she had! You can find the recipe here, including her usual exhaustive process of testing techniques and ingredients as favoured by various well known recipe-writers.

We decided to follow the recipe that Felicity settled on, with two slight variations. For our litre of liquid, we cooked the chopped woody ends in just 500ml of water and supplemented that liquid with 500ml of salt-reduced chicken stock. This produced a satisfyingly robust result without diminishing the pre-eminence of the asparagus.

Our other variation was to add one-quarter of a teaspoon of white pepper at the same time as the cream. To our palates, white pepper is a must-use ingredient when preparing a dish of asparagus.

Here are some photos of the method, followed by a bowl of the soup we made (twice and counting!) 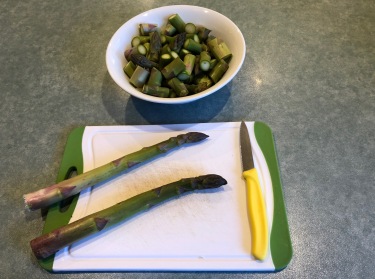 On the left below, we have just added the liquid after the spring onion has been sauteed in butter and the plain flour has been cooked for a minute or so. Once the liquid has warmed through, the chopped asparagus goes into the pan. 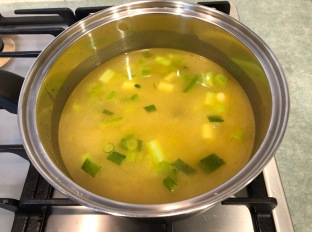 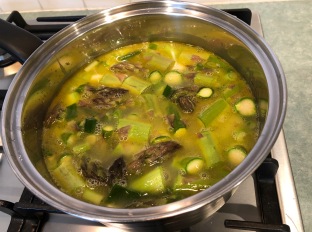 The camera doesn’t really do justice to the colour of the soup; it is actually greener than it looks here. 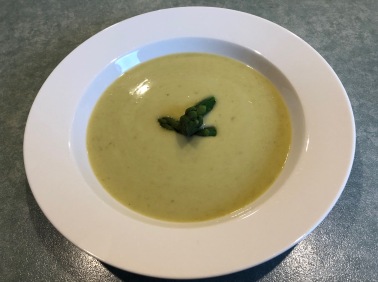 And here is another option for serving cooked fresh asparagus – cooled down in the fridge then wrapped in pieces of smoked salmon which have been smeared with a paste of sour cream, grated horseradish and a pinch each of salt, pepper and caster sugar. 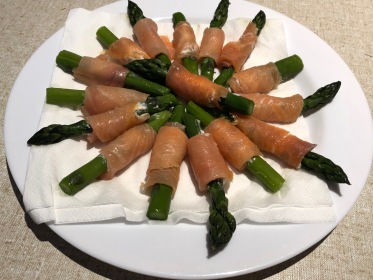 Maggie and I are both in our late 60s and live in Melbourne, Australia. This blog is devoted to our shared passions for travel and fine dining at home. Recently, I added Australian politics to the scope of the blog, inspired by the election of a Labor Government at a national level. Rick Grounds
View all posts by rmgtravelsandfood →
This entry was posted in Cooking and tagged asparagus, asparagus soup. Bookmark the permalink.