Posted on March 27, 2019 by rmgtravelsandfood

As is the case for many other countries, cooking competitions are produced for television in Australia. Some are for amateur cooks, in teams or as individuals; others provide opportunities for professional chefs to test themselves against their colleagues.

For the last decade or so, two shows for amateur wannabe-cooks on competing Australian TV networks have proven to be especially popular: My kitchen rules, for teams of two; and Masterchef, for individuals.

The latter has one notable point of difference, compared not only to its competitor but also to the vast majority of such shows across the globe. On Masterchef, the contestants, numbering 24 at the beginning of each season, are NICE to each other. They encourage and support other members of the group, swap cooking tips, share ingredients in emergencies and form friendships which endure long after each year’s winner has been crowned.

Such is the level of bonhomie, on and off the set, that ‘celebrity’ cooks and chefs from Australia and overseas queue up to make guest appearances. So, the contestants and we viewers get to enjoy a ‘Heston Blumenthal Week’ or a ‘Nigella Lawson Week’, to drop a couple of English names.

Unsurprisingly, most would-be contestants go to great lengths to make themselves competition-ready by the time auditions are held around Australia.

And, for the lucky 24 who earn their Masterchef apron, the combination of ‘happy family’ – the contestants all live in the one house – and the high-level of expert input generates a standard of cooking and on-camera personality that enables many of them to forge careers as multi-media cooks. Think: cook books, guest appearances at events, regular news media columns, and television spots or even whole series. Former contestants are actually referred to as Masterchef alumni, if you don’t mind!

Which brings me to the subject of this post: Adam Liaw, who won the second season of Masterchef. If you are interested, you can find out more about Adam and his impressive career here. For now, I want to introduce you to a couple of his recipes, which we took from one of his regular Sunday contributions to our preferred metropolitan newspaper.

Adam’s recipes are diverse, consistently appealing, use ingredients which are widely available close to home, are easy follow and, most importantly, they work!

The first recipe was for a dish going by the name of ‘kuku paka’. Adam wrote that it is of east African origin and that ‘kuku’ is the Swahili word for chicken, while ‘paka’ is the Bengali word for delicious. And the dish is spicy, as in the curry genre. Spicy, delicious and chicken: what’s not to like?

We followed the recipe fairly closely, noting that it is very important to cook the onions until they are quite soft, as there isn’t enough cooking time afterwards to finish the job for you. We varied the spice mix a little, substituting some Madras-style curry powder to provide as much turmeric as we will tolerate and then reducing the amount of chilli powder a little.

Also, we added about one cup of peeled, diced sweet potato, for both variety and the hint of sweetness. With acidity from the tomatoes, we don’t think the dish needs the lemon juice and, unlike most of you, we just don’t like fresh coriander.

You might find you need to add a little more salt and a pinch or two of sugar; and the volume of coconut milk will vary according to your own taste. But the dish was delicious and will be a regular item on our cold-weather menu for the rest of this year, at least.

Here is our version of ‘kuku paka’, in the pot and on the plate. We accompanied it with a raita of yoghurt, fresh mint and cucumber.

Having recently returned from Vietnam, where sweet & sour salads are commonplace, we jumped at the opportunity to make this dish. All the more so, because we had hot, cayenne chillies growing in our garden.

Again, the recipe worked well but we did make some minor changes, beginning with 25% of the solid ingredients to make just enough for the two of us. However, we made 50% of the pickling liquid and found that it was sufficient for making the 25% version of salad on three separate occasions. (I hope you can follow the maths!)

Also, once we had sliced our eschallot finely, we put it in a dish and poured over the pickling liquid, allowing it to soften and macerate while we prepared the other ingredients.

We also suggest that you try to pick up a chilli that has plenty of heat but also fruitiness, something we could ensure by picking a very ripe chilli from our bush.

This salad is quite tasty on its own but it is an excellent side dish with grilled pork ribs which have been marinated with south-east Asian flavours. You can find an example here. 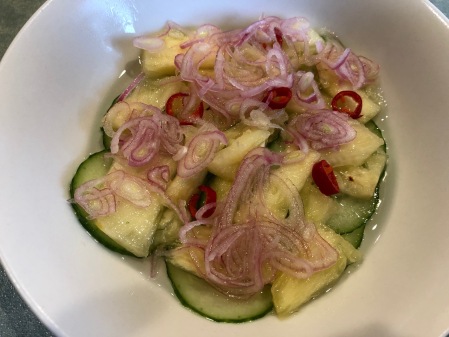 Maggie and I are both in our mid-60s and live in Melbourne, Australia. This blog is devoted to our shared passions for travel and fine dining at home. As cooks, we are skilful and adventurous within a framework of mainly traditional ingredients and techniques, and we aim to prepare nutritious food that looks good and tastes delicious. Our evolving repertoire is influenced by both our travels and Melbourne's vibrant food culture. While we are young enough, our priority travel destinations are overseas, although we do spend a few long weekends each year exploring parts of south-eastern Australia. As travellers, we are most comfortable with a combination of organised and independent touring. Our first overseas journey together was to Italy in the northern autumn of 2008. We later travelled in France (2009), Spain (2011), Singapore and Cambodia (2012/13). All trips from 2014 to 2016 are documented in this blog. When time allows, we will publish posts about our journeys - eight and counting - in 2017, 2018 and 2019
View all posts by rmgtravelsandfood →
This entry was posted in Cooking and tagged chicken curry, cucumber salad, kuku paka, pickled salad, recipe for kuku paka, recipe for Vietnamese salad, sweet & sour salad. Bookmark the permalink.