Posted on March 20, 2019 by rmgtravelsandfood

Over the last three months, Maggie and I have made an unusually large number of salads, including various single-bowl salads that were complete meals in themselves.

Why so? Well, it has been a long, warm, dry summer in our corner of the world. So, refreshing salads have appealed much more than cooked vegetables. Secondly, we defied the outlook for dry weather by planting cucumber and zucchini plants. We did produce an abundant crop of both vegetables, but at what cost we will only know when the next water bill arrives!

Our appetite for salads was also stimulated by a recipe in our weekend newspaper which combined prosciutto, char-grilled halloumi and fresh fig with green leaves. This recipe guided us to a new genre of summer dining pleasures, including those featured in my previous post. (I will discuss this recipe in more detail in a subsequent post.)

And the other influence on our frequency and style of salad dishes was a warning from my doctor that my blood sugar level was on the rise. A sizeable reduction in my consumption of carbohydrates was my best hope of avoiding type 2 diabetes. (As Murphy’s Law would have it, this warning came just after we had dug up our potato crop, all five kilos of it. Sigh!)

The early casualties of my low-carb regime included two summer favourites: meat & salad sandwiches and Caesar-style salads with croutons. (And don’t get me started on the no-pasta disaster!)

However, armed with our supply of long, green things and stimulated by new recipes, our repertoire of salads blossomed and quickly neutralised my lingering longings for carbs.

Now, cucumbers tend to get a bit lost in mixed salads; they can’t compete with other, more illustrious ingredients. So, we mainly use them peeled and diced in a raita, with yoghurt and chopped mint, to accompany a fish curry. However, a short visit to the internet unearthed a deceptively simple recipe, which uses salt to concentrate the cucumber’s own flavour and convert it to a salad hero.

Our method used old tea towels to press the slices dry after rinsing; we dressed it with our own vinaigrette; and we replaced the red onion with fresh chives from our kitchen garden. I swear it tasted more interesting than it looks! And it kept well for a day or so in the fridge. 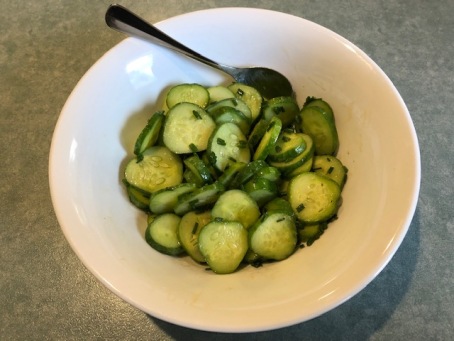 Next, the zucchini. They were always destined to be charred on the grill of our Weber Q, which is ridiculously easy to do. Trim the ends of each zucchini, then cut them lengthways into slices about 5mm thick. (Cut longer zucchini in half across beforehand.) Salt all the flesh lightly, on both sides, and leave for no more than 15 minutes. Rinse well and pat dry with kitchen paper or tea towels.

(The salting is designed to reduce the water content of the flesh, which accentuates the effect of the subsequent charring. It has nothing to do with bitterness. That is an old husband’s tale!)

Once the zucchini is dry, heat your grill and drizzle some olive oil over one side of each slice of zucchini. When the grill is hot enough to cook a piece of steak, place the zucchini oiled-side down on the grill, cook for 4 minutes, turn and cook for another 4 minutes and, if you think they need a bit more charring, put them back on the first side for another minute or so.

Alright, that might not be intellectually challenging but it is a bit fiddly. So, to get a decent return on your time investment, complement the grilled zucchini with premium partners. We have two combinations to recommend.

The first is to cut your zucchini slices into shorter lengths and toss them with pieces of toasted walnut and small pieces of soft feta, also known as Persian feta. No further dressing required. 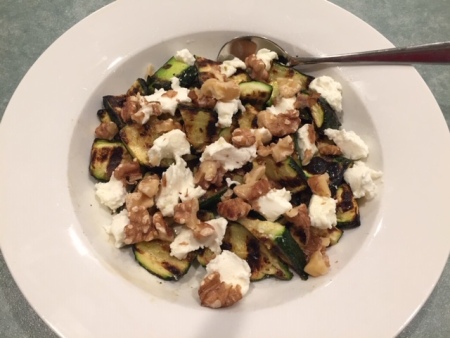 The second option was inspired by a recipe my friend Bill sent to me. (Bill was the first person I knew well who had cut carbs from his diet in order to fend off the threat of diabetes. So, it was delivered to my Inbox with the admonition to delete the croutons.

We made it once, more or less following the recipe, and then we modified it to suit our palates. The biggest change was to replace the asparagus with our homegrown zucchini. Minor changes? Drop the parsley, so the basil could shine, and we used our vinaigrette rather than the vinegar.

The result is a colourful salad, full of summertime flavours, delicious in its own right but also a great partner with grilled lamb or chicken or pan-fried white fish. 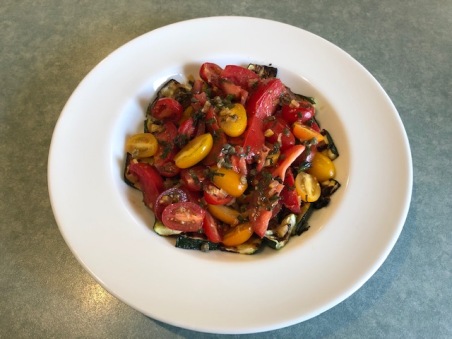 The final salad of this post also uses soft feta.

Bill and I meet a few times each year for lunch in central Melbourne. The most recent of these was a few days after I had received my warning about blood sugar. So, I was quite keen that we should fine a dining spot that offered some attractive low-carb lunch options. The end result was that I ate a salad of mixed leaves, grilled Portobello mushroom pieces, soft feta and some toasted pine nuts. Sounds simple but the flavour profile was quite complex and very more-ish.

At home, I have produced a modified version several times, replacing the pine nuts with toasted walnuts and, for the mushroom element, gently frying chunks of Swiss Brown mushrooms and finishing them off with a bit of beef stock under a lid.

It makes for a very satisfying light lunch and comes in handy on days when Maggie really wants a toasted ham sandwich!

And now, after all those key-strokes and with Maggie due home from work soon, it is time for me to start lining up the ingredients for the salad that will form part of tonight’s summertime dinner and then feature in my next post.

Until then, cheers
Rick Grounds

Maggie and I were both born in the early 1950s and we live in Melbourne, Australia. This blog is mainly devoted to our shared passions for travel and fine dining at home. Recently, I added Australian politics to the scope of the blog, inspired by the election of a Labor Government at a national level. Rick Grounds
View all posts by rmgtravelsandfood →
This entry was posted in Cooking, Home life and tagged char-grilled zucchini, cucumber salad, feta salad, recipe for cucumber salad, recipe for zucchini salad, zucchini salad. Bookmark the permalink.