Summer time, and the grilling is easy: verses 4 and 5

Posted on December 10, 2017 by rmgtravelsandfood

In a recent post, I provided recipes for three methods Maggie and I have added to the repertoire for char-grilling on our Weber Q.

Here are two more: one for boneless pieces of lamb leg; the other for thin pieces of veal, marinated with fresh herbs from our garden.

This is a great way to prepare lamb on the barbecue, because you produce a crunchy char on the outside of the meat whilst retaining plenty of moisture in the middle

The recipe we found and then modified is here. For the marinade we use the recommended ingredients in the following proportions:

Once you have combined the ingredients in a bowl, you’ll have enough for a piece of lamb up to one kilogram in size. Because there are only the two of us, we buy a whole boned leg and divide it into four portions, each weighing between 500 and 700g. We freeze three of the pieces immediately; of these, the smallest one will eventually be minced for something like lamb kofta.

Once the remaining piece has been well coated with the marinade, we cover it with cling wrap, leave it in a cool place for half an our so and then refrigerate it overnight.

Our cooking method varies significantly from that in the original recipe. We remove the lamb a good hour before cooking and set up our Weber Q for roasting. Once the Weber has reached about 180C, we put the lamb in and roast it for about 30 minutes, for a 600g piece. We quickly reset the Weber for grilling, place the lamb skin-side down and cook it for about 6 minutes, turn it over and cook it for a further 3 to 4 minutes.

Here is how it turns out! 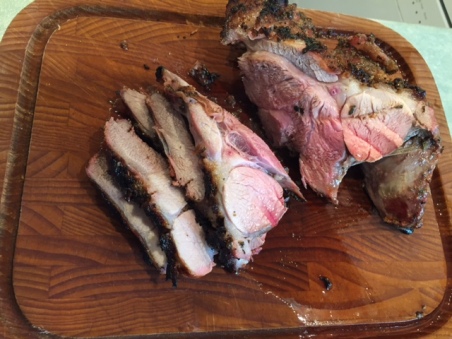 If you wanted to use this recipe to feed a large group of friends or family, you could use a whole boned leg, butterflied; double the quantity of marinade, give or take; roast the lamb for about 35 to 40 minutes; and char it much as for a smaller piece.

We are big fans of cooking with veal but veal is not your typical candidate for being chargrilled, especially by amateurs at home. However, inspired by a dining experience at a Turkish restaurant in our national capital, Canberra, we went looking for some tips on how to do it.

The recipe we began with is here. We have modified both the method and the relative quantities of the ingredients. The original recipe was from the USA and uses a cut of veal called ‘tenderloin’; I’m not sure what that is but it is probably similar to what is known in Australia as ‘escallops’ or ‘fillets’. These are mainly used to make dishes such as veal scallopini or, when coated with egg and breadcrumbs after being beaten thin, to prepare the classic wiener schnitzel.

This will make enough for about 300g of veal, give or take, which is plenty for two middle-aged adults!

The tricky part is ensuring that the veal pieces are thin enough that they won’t end up chewy in the middle, yet thick enough that the marinade ingredients have time to cook without the meat drying out too much. I can’t give you a specific thickness for this – and I still get it wrong half the time – but it is somewhere between the ideal thicknesses for veal scallopini and wiener schnitzel, respectively. My apologies for the imprecision!

We coat the meat in the marinade two hours prior to cooking, cover it and refrigerate it for 90 minutes, removing it from the fridge for the final 30 minutes.

Then you must get your grill to a very hot temperature, add the veal, cook it for exactly 4 minutes, flip it and cook for exactly 2 more minutes. 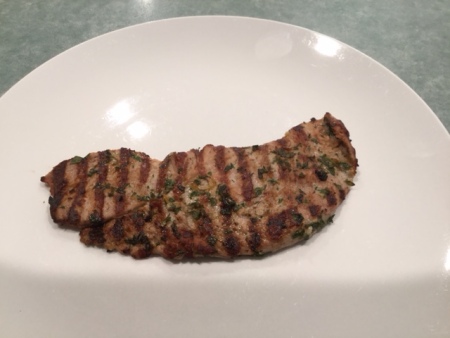 Maggie and I are both in our mid-60s and live in Melbourne, Australia. This blog is devoted to our shared passions for travel and fine dining at home. As cooks, we are skilful and adventurous within a framework of mainly traditional ingredients and techniques, and we aim to prepare nutritious food that looks good and tastes delicious. Our evolving repertoire is influenced by both our travels and Melbourne's vibrant food culture. While we are young enough, our priority travel destinations are overseas, although we do spend a few long weekends each year exploring parts of south-eastern Australia. As travellers, we are most comfortable with a combination of organised and independent touring. Our first overseas journey together was to Italy in the northern autumn of 2008. We later travelled in France (2009), Spain (2011), Singapore and Cambodia (2012/13). All trips from 2014 to 2016 are documented in this blog. When time allows, we will publish posts about our journeys - eight and counting - in 2017, 2018 and 2019
View all posts by rmgtravelsandfood →
This entry was posted in Cooking and tagged Barbecued lamb, boneless lamb leg, chargrilled lamb, chargrilled veal, recipe for chargrilled lamb, recipe for chargrilled veal, veal escallopes. Bookmark the permalink.