Posted on August 30, 2017 by rmgtravelsandfood

The weather has been quite wintry since mid-July, when Maggie and I returned to Melbourne from our travels in North America. Even when the clouds have cleared to let some sunshine in, cold winds have made it feel bleaker than it looks.

However, we have made room for three new recipes, one inspired by some belt-tightening, the other two by our local supermarket introducing a regular bargain-priced offering of good quality duck breasts and whole quail.

The belt-tightening – a rehearsal for living on a modest, fixed income one year soon – has lead us to use cheaper cuts of beef more often, assigning the more expensive cuts to special occasion dining. Taking advantage of ‘specials’, we have produced enough food to provide us with six dinners each using less than $25 of what is known here as gravy beef; some of you might know it as ‘shin’ beef.

We use this cut to produce both boeuf bourguignon and beef goulash. However, keen to expand our repertoire of cheap-but-tasty meals, we went looking for a third option. The one we found most appealing was located by Googling ‘how to cook the perfect beef casserole or stew’. This took me to one in the regular series of ‘how to cook perfect …’, published in the British newspaper The Guardian. (My good friend Bill introduced me to this column last year and I have gone to it several times since.)

You can read the beef stew column here. It worked well enough but the flavours and textures fell just a little short of what we experience with our two established faves. Still, we might give it another try next year, after we return to yet another local winter from northern hemisphere travels (Scotland and Norway, more news of that another time).

The novelty of nearby access to fresh quail prompted another search. This time, I found something on the Australian recipe website taste.com, for a dish called hunter-style-quail. (That would be quaglia cacciatore in Italy.) The recipe worked well enough but, when we make a second attempt, we will delete the red-wine vinegar – it served no purpose and made the sauce so astringent that we needed to go to some lengths in order to rescue it.

The third new recipe took advantage of the local supply of duck breast. Again, we found it on the taste.com website, one of more than 50 recipes featuring duck breast. Only a few of these recipes appealed as a source of winter comfort and this one struck a chord for us with orange and fennel in the mix of ingredients.

We began to modify the recipe from the outset, made further changes before our second attempt and have tweaked it yet again to settle on the recipe below.

We served it on a bed of basmati rice and mixed quinoa (two parts to one), with the salad as a side dish. The slightly untidy look of the sauce on top of the duck meat is due to the fact that we choose not to strain the fibre out of our hand-squeezed orange juice.

And here is how it looked the second time we made it, with the orange juice strained and some further tweaking of the recipe.

Salad
1/2 small fennel bulb, trimmed and finely sliced
1 small or 1/2 a large flavoursome orange, peeled and cut into small segments (remove as much pith and membranous material as you can)
vinaigrette dressing 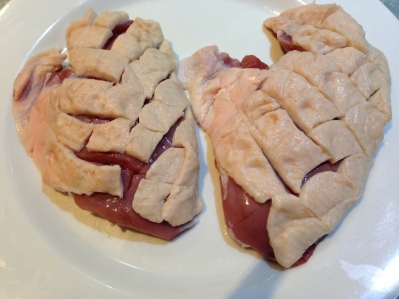 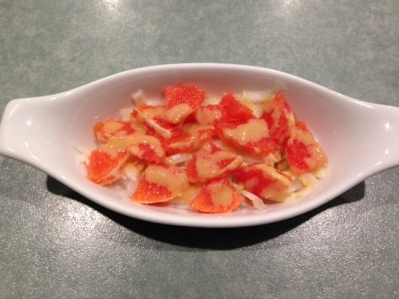 Maggie and I were both born in the early 1950s and we live in Melbourne, Australia. This blog is mainly devoted to our shared passions for travel and fine dining at home. Recently, I added Australian politics to the scope of the blog, inspired by the election of a Labor Government at a national level. Rick Grounds
View all posts by rmgtravelsandfood →
This entry was posted in Cooking and tagged duck breast, fennel bulb, orange salad. Bookmark the permalink.