‘s a lot of tomatoes in those tarts

Posted on February 22, 2017 by rmgtravelsandfood

Each summer, Maggie and I grow ‘cherry’ tomatoes in pots, one plant per pot. This season, the crop began slowly – plenty of small, green tomatoes but none of them were ripening. Maggie even wondered if we had planted them too late. Offended – preparing the pots is my job – I assured her that was not the case!

Then, in the second week of January, the fruit began to ripen and, before long, Maggie was cropping at a rate of 20 or more per day. We had three bowls of them in a corner of our kitchen, sorted according to ripeness, and tomatoes were being distributed to grandchildren and friends, and still the supply kept coming. It was as if some sort of hybrid of the Pied Piper and the Sorcerer’s Apprentice had taken control of our cherry tomato plants!

Alright, that sounds a bit hysterical, but the bounty did stretch our culinary ingenuity, that is, until I remembered a dish that we hadn’t made for a decade or so – tartlets of caramelised shallots, feta cheese and cherry tomatoes. 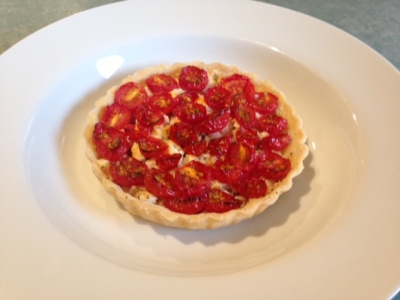 We cooked four tarts, using loose-based, non-stick, flan tart pans that were 11.5cm or 4.5 inches in diameter. The shortcrust pastry was made according to our recipe for quiche lorraine, with quantities reduced by about 10%.

Maggie peeled about 200g of (French) shallots, halved them lengthways and sliced them finely, then added them to a pan in which I had melted about 20g of butter, over a gentle heat. (You need a generous knob of butter but not as much as when you sauté onions for a quiche; the latter is almost like ‘poaching’ the onions.) As the shallots began to cook, we added a generous grind of pepper and a couple of pinches of salt.

Once the shallots had softened, Maggie added 15ml of sweet sherry and 1 tsp of sugar. When the sherry had been absorbed, another 15ml was added and the shallots were sautéed until they began to turn golden brown in colour.

There was about 70g of pastry for each tart and I rolled it out a little thinner than I would for a full-sized quiche – you don’t want to overwhelm the tart’s filling. To assemble the tarts, we spread the shallots over the bases, added a layer of crumbled Greek feta – 35g per tart – and then a generous layer of halved cherry tomatoes, flesh-side up. After adding a generous grind of black pepper, we cooked the tartlets for about 25 minutes in a fan-forced oven heated to 165C.

The next photo was taken just before we put the tarts in the oven. The final one shows the profile of the tarts’ filling, with just a small amount of tomato skin scorching by the time the tarts were cooked. 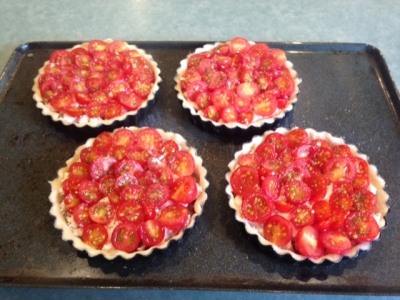 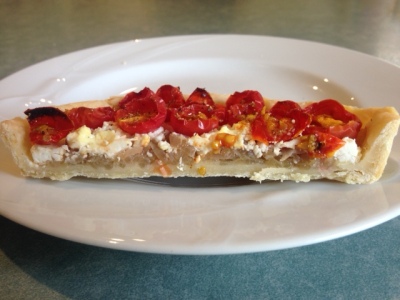 Maggie and I are both in our mid-60s and live in Melbourne, Australia. This blog is devoted to our shared passions for travel and fine dining at home. As cooks, we are skilful and adventurous within a framework of mainly traditional ingredients and techniques, and we aim to prepare nutritious food that looks good and tastes delicious. Our evolving repertoire is influenced by both our travels and Melbourne's vibrant food culture. While we are young enough, our priority travel destinations are overseas, although we do spend a few long weekends each year exploring parts of south-eastern Australia. As travellers, we are most comfortable with a combination of organised and independent touring. Our first overseas journey together was to Italy in the northern autumn of 2008. We later travelled in France (2009), Spain (2011), Singapore and Cambodia (2012/13). All trips from 2014 to 2016 are documented in this blog. When time allows, we will publish posts about our journeys - eight and counting - in 2017, 2018 and 2019
View all posts by rmgtravelsandfood →
This entry was posted in Cooking and tagged feta cheese, recipe for tomato tart, savoury tarts, tomato tart. Bookmark the permalink.