Plum job puts some spice in our life

Posted on February 22, 2017 by rmgtravelsandfood

We had a ton of tomatoes, our neighbours had a surplus of satsumas. Plums that is. And they kindly shared the feast of fruit with their friends. Like us!

Normally, I would convert these fleshy, red plums into one of my plum cakes and stew the balance to have with muesli and yoghurt of a morning. However, this year’s supply was delivered when Maggie was in a mood to make savoury condiments, so she hit the internet to find a recipe or two for me to appraise.

You can read the one we decided to follow here. Over the following fortnight, she made three batches and we made some modest modifications along the way. Firstly, we took up suggestions from some of the recipe’s reviewers: add some ‘plum’ tomatoes, known as Roma in Melbourne (we peeled them first); simmer without a lid; and more ginger (we made it 80ml and used what is known here as ‘naked’ ginger).

We also discovered that you need to be mindful of the flavour of the plums when you add the cayenne pepper – the ‘fruitier’ the plum, the more cayenne it can handle, so perhaps use half a teaspoon if your plums have a mild flavour.

What else? We were casual about how many plums we used in each batch but it was probably a good 10% more than specified. Maggie put all the ingredients in her pan at the same time, cooked them over gentle heat until the sugars were dissolved and then cranked it up to a busy simmer. To finish, she mixed about 15ml of cornflour with some cold water and stirred it into the chutney to thicken it a little more. And, for Australian readers, ‘raisins’ translates as sultanas.

So far, we have found the chutney to be a pleasing partner for roast poultry and baked pork ribs. Before long, it will be put to the duck test! 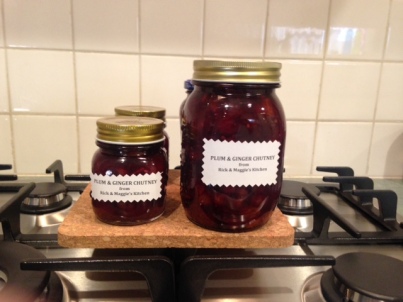 Maggie and I are both in our mid-60s and live in Melbourne, Australia. This blog is devoted to our shared passions for travel and fine dining at home. As cooks, we are skilful and adventurous within a framework of mainly traditional ingredients and techniques, and we aim to prepare nutritious food that looks good and tastes delicious. Our evolving repertoire is influenced by both our travels and Melbourne's vibrant food culture. While we are young enough, our priority travel destinations are overseas, although we do spend a few long weekends each year exploring parts of south-eastern Australia. As travellers, we are most comfortable with a combination of organised and independent touring. Our first overseas journey together was to Italy in the northern autumn of 2008. We later travelled in France (2009), Spain (2011), Singapore and Cambodia (2012/13). All trips from 2014 to 2016 are documented in this blog. When time allows, we will publish posts about our journeys - eight and counting - in 2017, 2018 and 2019
View all posts by rmgtravelsandfood →
This entry was posted in Cooking and tagged blood plums, chutney, plum chutney, satsuma plums. Bookmark the permalink.