Visit to Canberra: a symphony in five monuments (day 2)

Posted on December 7, 2016 by rmgtravelsandfood

On our second full day in Canberra, Maggie and I visited three more national monuments.

We first visited the National Portrait Gallery in 2013, soon after it it moved into a purpose-built facility. The gallery houses a wonderful collection of portraits of Australians, as well as some foreigners with a special connection to our country. Most of the portraits’ subjects are well known, but the lesser-known ones are brought to life by well-told back-stories, and the collection as a whole is enlivened by the variety of media and styles, ranging from formal, through quirky to outrageous, in a good way!

The focus of our visit this time was an exhibition called The popular pet show. You can learn more about it here. The exhibition comprised works by 16 artists, depicting a variety of famous and not-so-well-known Australians with their pets. Many of the works had been produced especially for the occasion and the overall mood was weighted to the quirky end of the spectrum. Here are just four of the many works that delighted us.

Self with friends, 2016 by Lucy Culliton

Self Portrait (the year my husband left), 2008 by Jude Rae

We could happily have spent more time with the pets but we wanted to reach the National Library by 11am, to take a free tour of some of the library’s ‘treasures’. As you can see, the library too is housed in an imposing building. 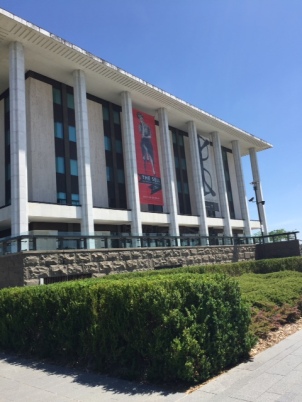 On either side of the marble-floored entry foyer is a cafe and a gift shop. The windows in the cafe are filled with stained-glass created by Australia’s foremost exponent of this art-form, Leonard French. (French is most famous in Australia for creating a stained-glass ceiling in the Great Hall of the National Gallery of Victoria, a building for which the architect was my great uncle Roy Grounds.)

Our short tour of some of the library’s ‘treasures’ was, for us, a mixed bag, but it served to introduce us to the fact that the library holds a vast collection of material of historical interest to Australians. 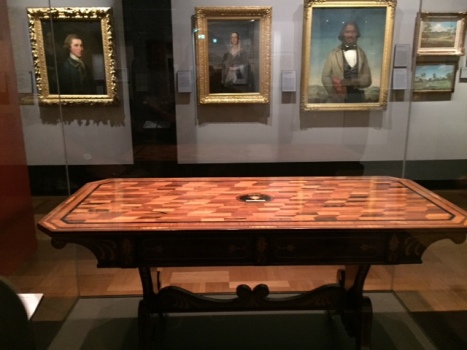 The tour ended at a display of some works by Athol Shmith, Australia’s most renowned society and fashion photographer of the 20th century. Shmith was best known in his home city of Melbourne, but he also undertook a variety of important work at a national level. You can learn more about Athol Shmith here, including his extensive influence on the development of the craft of photography in our country. 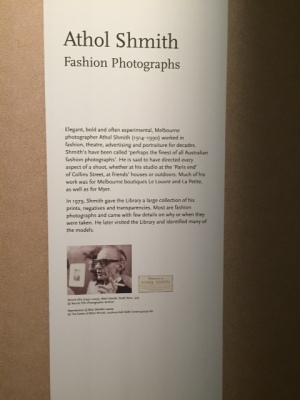 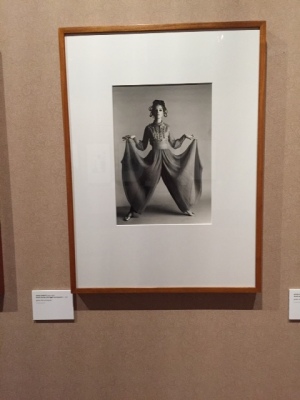 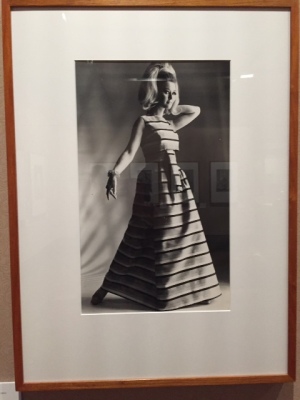 After a light lunch at the National Library’s cafe, we headed to the National Museum of Australia to view A history of the world in 100 objects from the British Museum, the exhibition which was the initial purpose of our journey to Canberra.

Based on our 2015 visit to the British Museum in London, our expectations were high. Possibly, they were too high, which would partly explain my mixed feelings about what we saw this time around.

The collection of 100 exhibits, some including up to half a dozen objects, was ordered chronologically and into defined phases in the development of human civilisation. Fair enough. However, the lighting in the room had been dimmed, as if for a piece of theatre, which made for a strange atmosphere.

The objects were mainly items of art or craft, interesting enough taken in isolation and enlivened by their accompanying interpretive stories. The latter demonstrated the skills and expertise of museum personnel to understand and explain objects as indicative benchmarks of ways of life, social organisation, economic conditions and so on.

However, the limited presence of utilitarian items – tools, machines, etc – made the exhibition as a whole feel unbalanced. Of course, the fact that my feet were tiring, painfully, of visits to monuments may have exaggerated my sense of frustration!?

Here is a limited sample of what we saw, beginning with a statue of Rameses I and concluding with two very different images of an Indian rhinoceros: one, part of a famous early-16th century woodcut print by a German artist (he had only one sketch and some travellers’ tales to work from), which was part of a sign pointing to the other, a tricky-to-photograph 21st century hologram. 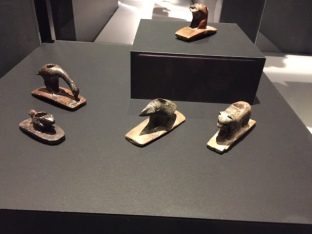 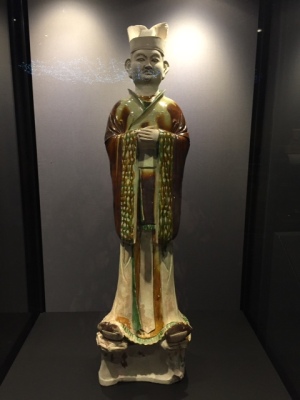 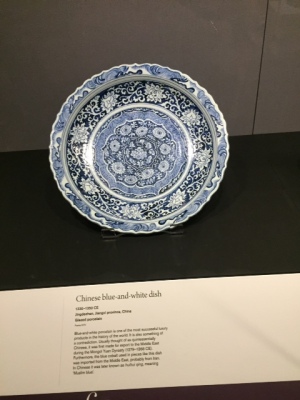 The full print of Dürer’s Rhinoceros was one of the 100 exhibits and, in fridge magnet form, we have brought a copy home with us. You can learn more about it here.

Maggie and I are both in our mid-60s and live in Melbourne, Australia. This blog is devoted to our shared passions for travel and fine dining at home. As cooks, we are skilful and adventurous within a framework of mainly traditional ingredients and techniques, and we aim to prepare nutritious food that looks good and tastes delicious. Our evolving repertoire is influenced by both our travels and Melbourne's vibrant food culture. While we are young enough, our priority travel destinations are overseas, although we do spend a few long weekends each year exploring parts of south-eastern Australia. As travellers, we are most comfortable with a combination of organised and independent touring. Our first overseas journey together was to Italy in the northern autumn of 2008. We later travelled in France (2009), Spain (2011), Singapore and Cambodia (2012/13). All trips from 2014 to 2016 are documented in this blog. When time allows, we will publish posts about our journeys - eight and counting - in 2017, 2018 and 2019
View all posts by rmgtravelsandfood →
This entry was posted in Travel and tagged Australian National Memorial, Canberra, National Library of Australia, National Portrait Gallery. Bookmark the permalink.