Posted on November 1, 2016 by rmgtravelsandfood

Our lemon tree has produced a bumper crop this year. So, although it is nearing the end of the season, we still have plenty of fruit ripening on the tree. We always give some of the fruit away to family and friends and put the balance to good use in our kitchen, including with crepes and sugar, as part of a poaching liquid for pears, lemon delicious pudding and, in bulk quantities, to make jars of preserved lemons.

This season, we found ourselves with a stockpile of preserved lemons, so we decided to make some lemon cordial together for the first time. The first batch was delicious, diluted one part cordial to about five parts sparkling mineral water. So delicious, in fact, that Maggie’s thoughts soon turned to how well it would work with gin!

Next day, we made another two batches (and we will make a final batch later today). Some of these bottles will become festive season gifts; the balance will keep us refreshed during the summer months. 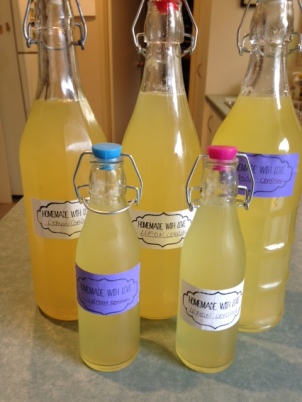 Here is the recipe’s method, which assumes that you have access to fresh lemons that have not been waxed. By ‘large’, I mean lemons that average about 9-10cm long.

The zest is important both for colour and, to a lesser extent, for flavour. To remove the lemon zest, Maggie uses this stainless steel device attached to a handle: 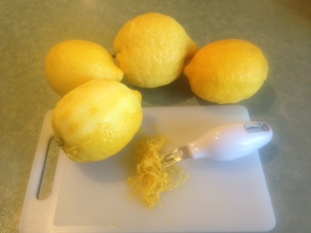 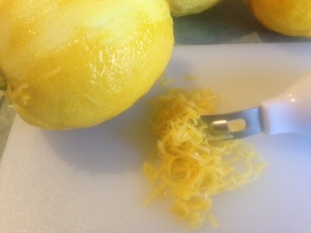 It is still Spring here in Melbourne, the best season for eating dishes made from lamb. In between the second and third batches of cordial, we prepared a pot of Abbacchio alla Romana, which is often made with pieces of lamb shoulder. We prefer to use lamb shanks – in season the meat is almost as tasty as from the shoulder and there is less fat. I have previously published the recipe as Capretto alla Romana, made using shoulder pieces of goat; otherwise it is exactly the same.

We took the lamb shanks off the heat before they were ready to serve; this dish was destined for our table a couple of days later.

After we had bottled the next batch of cordial, we prepared an evening meal to share with a couple of friendly neighbours: a main course of Navarin of lamb, followed by a dessert of lemon delicious pudding. It was all lip-licking lovely!

Maggie and I were both born in the early 1950s and we live in Melbourne, Australia. This blog is mainly devoted to our shared passions for travel and fine dining at home. Recently, I added Australian politics to the scope of the blog, inspired by the election of a Labor Government at a national level. Rick Grounds
View all posts by rmgtravelsandfood →
This entry was posted in Cooking and tagged abbachio alla romana, lemon cordial, lemon delicious pudding, Navarin of lamb, recipe for lemon cordial. Bookmark the permalink.