Posted on October 24, 2016 by rmgtravelsandfood

From time to time I have mentioned ways that we use cumquat-infused brandy and vinegar in our home cooking. And I have previously provided the recipe we follow when we make the infused vinegar, including suggestions on how to put this vinegar to good use in the kitchen.

Our Greek neighbours’ cumquat tree is heavily laden with fruit this year, so, a few weeks ago, we selected a small crop to make fresh supplies of the two liquids. Here is how they look, not quite half way through the infusion process. 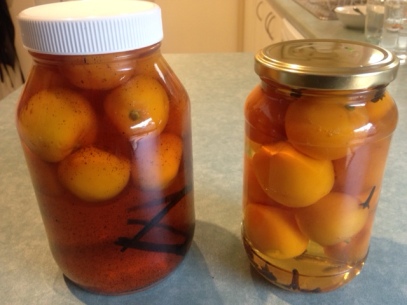 The jar on the left contains the brandy, made using just 500g of ripe cumquats according to the recipe provided below. The sugar is now completely dissolved and the colour of the brandy is deepening under the influence of the vanilla bean and the fruit. The aroma is already quite intoxicating!

The second jar contains the vinegar, originally white but now taking colour from the fruit, some cloves and a small piece of cinnamon. The aroma of this liquid is also becoming quite appealing, in a piquant kind of way.

At the end of November, we will remove the fruit, strain the liquids and pour each one into a bottle, to be stored in the pantry and used between now and next season.

We use the infused brandy as a substitute for plain brandy when cooking with duck or anything else that marries well with a flavour of orange citrus.

Maggie and I are both in our mid-60s and live in Melbourne, Australia. This blog is devoted to our shared passions for travel and fine dining at home. As cooks, we are skilful and adventurous within a framework of mainly traditional ingredients and techniques, and we aim to prepare nutritious food that looks good and tastes delicious. Our evolving repertoire is influenced by both our travels and Melbourne's vibrant food culture. While we are young enough, our priority travel destinations are overseas, although we do spend a few long weekends each year exploring parts of south-eastern Australia. As travellers, we are most comfortable with a combination of organised and independent touring. Our first overseas journey together was to Italy in the northern autumn of 2008. We later travelled in France (2009), Spain (2011), Singapore and Cambodia (2012/13). All trips from 2014 to 2016 are documented in this blog. When time allows, we will publish posts about our journeys - eight and counting - in 2017, 2018 and 2019
View all posts by rmgtravelsandfood →
This entry was posted in Cooking and tagged brandied cumquats, cumquats, pickled cumquats, recipe for brandied cumquats, recipe for pickled cumquats. Bookmark the permalink.