Posted on September 12, 2014 by rmgtravelsandfood

Hot, as in chilli; spicy, as in cardamom, clove, cumin and co.

For this post, I will work backwards some of the time, beginning with the end result of our explorations.

A serve of roasted, marinated chicken wings is one of our favourite Weber-weather dishes. The photos show a recent dinner, before and after cooking, including a lightly-dressed salad of roasted beetroot, blood orange and our homegrown green leaves. 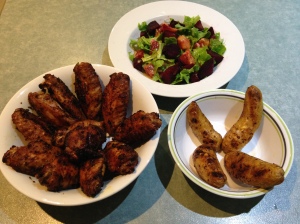 Berbere is the traditional Ethiopian spice mix, renowned for being both hot and spicy. We have been making our own for several years. It can be bought at specialist shops in Melbourne – including the peerless Gewürzhaus – but these have so much black pepper that the other ingredients struggle to be noticed.

We mainly use it with pork and chicken. Here is our recipe:

The other novel component of the marinade is the cumquat-infused vinegar. A few years ago, our Greek neighbours invited us to help ourselves to their abundant crop of cumquats. Yes, we made some jam/marmalade but we also tried to make some brandied cumquats and some pickled cumquats. Once they were ready to be used we decided that we didn’t much like the fruit but the liquids were stunning and we maintain a constant supply of both.

The vinegar is mostly used in marinades but I also use it to top up a batch of vinaigrette that needs more acid. Here is the recipe:

Meanwhile, some toddler – ie, not baby – beetroots were tossed with olive oil, salt and plenty of black pepper after being boiled whole for a good 20minutes, peeled and cut into large wedges, then roasted in the Weber. The other item on the menu was whole kipfler potatoes, pricked – to prevent explosions – then boiled for 12-15 minutes, rolled in leftover marinade and roasted in the Weber.

As Maggie says, “we love our Weber Q”.

Maggie and I are both in our mid-60s and live in Melbourne, Australia. This blog is devoted to our shared passions for travel and fine dining at home. As cooks, we are skilful and adventurous within a framework of mainly traditional ingredients and techniques, and we aim to prepare nutritious food that looks good and tastes delicious. Our evolving repertoire is influenced by both our travels and Melbourne's vibrant food culture. While we are young enough, our priority travel destinations are overseas, although we do spend a few long weekends each year exploring parts of south-eastern Australia. As travellers, we are most comfortable with a combination of organised and independent touring. Our first overseas journey together was to Italy in the northern autumn of 2008. We later travelled in France (2009), Spain (2011), Singapore and Cambodia (2012/13). All trips from 2014 to 2016 are documented in this blog. When time allows, we will publish posts about our journeys - eight and counting - in 2017, 2018 and 2019
View all posts by rmgtravelsandfood →
This entry was posted in Cooking and tagged Berbere spice, chicken recipe, chicken wings, cumquats, Melbourne food. Bookmark the permalink.