Posted on July 19, 2016 by rmgtravelsandfood

In the southern half of Australia, we are experiencing our most severe winter for several years, with plenty of rain, strong winds and low temperatures. So, while our Weber Q sits idly outdoors, Maggie and I have retreated to a diet of comfort foods – hearty soups for ourselves, family and friends-in-need; roasted meats and vegetables; a variety of braises; and some luscious desserts.

The roast-dinners of the last fortnight have included duck, with a rice-based stuffing, which fed us for two evenings; and two chickens, with a herb-rich bread stuffing, which fed four adults at one sitting, with leftovers going into a warm salad, sandwiches and our Italian chicken & vegetable soup.

I rarely make my own stock – it is time consuming and we have access to some good quality commercial stock. However, with three carcasses to hand, as well as various raw and cooked bones, I had the basis of an inexpensive poultry stock.

I began with an online recipe for duck stock and, ahem, winged it from there: raw duck bones roasted with chunks of carrot, onion and celery until golden brown; pieces of the chicken carcasses roasted until almost caramelised; and all the pieces of poultry and vegetable, drained of fats, into a pot with other leftover bones, plenty of water, a few glugs of white wine, plenty of salt and peppercorns, leftover rice stuffing and a few fresh herbs. Just under two hours later, the strained liquid amounted to more than one and a half litres of richly-flavoured, gelatinous stock; this will be ideal for adding both flavour and texture to sauces and soups (but NOT for a slow-cooked chicken casserole, unless you have a thing for chicken-flavoured Jello!) 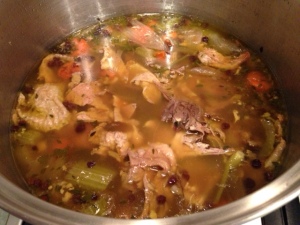 On the evening when we served the roast chicken to ourselves and two friends, we also served a dessert of baked pears, using a modified version of the recipe I posted a couple of years ago.  This time, I heated the orange juice in a small pan and added a medium pinch of saffron threads and, off the heat, let the colour bleed out for about 20 minutes. Then I passed the saffron-infused juice through a coarse sieve into a pouring jug, added the brandy and poured it carefully around the pieces of pear which Maggie had prepared and placed in the baking dish. The end result was delicious, with the saffron adding a pleasing touch of complexity. 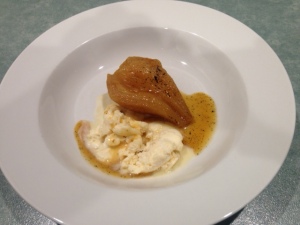 So, it’s the peak period for navel oranges, with freshly-squeezed juice going into those pears and, of a morning, a pre-work glass for Maggie; and the whole fruit being used for our Middle Eastern orange cake. And it’s also the time when our lemon tree becomes laden with ripe fruit, to be zested and juiced for such winter treats as lemon delicious pudding, a lemon & yoghurt cake and Maggie’s lovely crepes.

Not such a surprise then that all this intake of citrus triggered an old light bulb in my head, which sent me rummaging through cyber space for a recipe for ‘crepes suzette’. Here is the one we decided to use, word for word, at least for the sauce; we already have the crepes pegged. 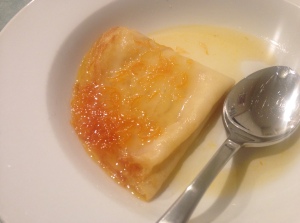 So retro. So delicious!

The final digest entry for this week is an alternative filling for the silver beet turnovers we made last month.

In a typical year, we buy just one packet of ten sheets of puff pastry. This year, four were used to prepare beef wellingtons for a friend’s 60th birthday; two to make lids for chicken pot pies; and two for those aforementioned turnovers.

For the last two sheets, I made a turnover filling according to my long-established recipe for a spinach or silver beet ‘flan’, known to my best friend as ‘Rick’s spinach pie’.

This option suited Maggie better; she is not a big fan of feta cheese. For me, this recipe, designed to fill a shortcrust pastry-case, was a better match, texturally, for the puff pastry than the previous filling, which is used with (lightly-oiled) sheets of filo pastry.

And then proceed as for the previous batch of turnovers.

Maggie and I are both in our late 60s and live in Melbourne, Australia. This blog is devoted to our shared passions for travel and fine dining at home. Recently, I added Australian politics to the scope of the blog, inspired by the election of a Labor Government at a national level. Rick Grounds
View all posts by rmgtravelsandfood →
This entry was posted in Cooking and tagged Baked pears, chicken stock, crepes suzette, silver beet. Bookmark the permalink.