Some persons don’t like to eat quail. My mother – who was very fond of food – was one; although she did eat the quail saltimbocca that was the centrepiece of our 2006 wedding feast.

Maggie likes quail. A lot. She introduced it to my diet – now, there’s an oxymoron for you – and there are now three quail recipes in our repertoire. The other two were added in 2013: quail involtini, for which Maggie did the boning; and roast stuffed quail. We cooked the latter again last weekend. 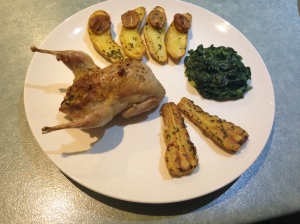 We first put this recipe together using a list of ingredients – names only – buried in an anecdotal piece about cooking quail by the much-admired Maggie Beer. This time we introduced two alternative ingredients, as indicated, to take advantage of cherries we had pickled and chestnuts we had roasted. Either way, the result is delightful.

To accompany the quail, we roasted some well-seasoned pieces of kipfler potato and parsnip with olive oil, garlic and chopped rosemary leaves; and we wilted a bunch of spinach leaves and mixed them with Dijon mustard and cooking cream. 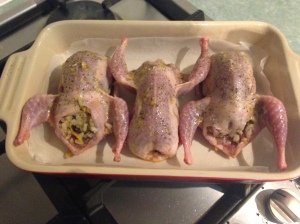 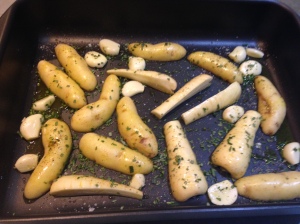 Maggie and I are both in our mid-60s and live in Melbourne, Australia. This blog is devoted to our shared passions for travel and fine dining at home. As cooks, we are skilful and adventurous within a framework of mainly traditional ingredients and techniques, and we aim to prepare nutritious food that looks good and tastes delicious. Our evolving repertoire is influenced by both our travels and Melbourne's vibrant food culture. While we are young enough, our priority travel destinations are overseas, although we do spend a few long weekends each year exploring parts of south-eastern Australia. As travellers, we are most comfortable with a combination of organised and independent touring. Our first overseas journey together was to Italy in the northern autumn of 2008. We later travelled in France (2009), Spain (2011), Singapore and Cambodia (2012/13). All trips from 2014 to 2016 are documented in this blog. When time allows, we will publish posts about our journeys - eight and counting - in 2017, 2018 and 2019
View all posts by rmgtravelsandfood →
This entry was posted in Cooking and tagged Melbourne food, Quail recipes, Roast quail. Bookmark the permalink.