This year’s first blast of wintry weather arrived last week, triggering a shift to cold-weather cooking in our kitchen – the culinary equivalent of digging out your winter PJs from the bottom of the wardrobe.

Naturally, being a bit out of practice, we turned initially to some of our winter standards: chicken braised with leeks, one of the first dishes we made together; veal osso buco, 33 years in my repertoire; pot-roasted goat, aka capretto alla romana; and crepes, an all-year-rounder but preferred onwards from the start of winter as the first of the lemons ripen on our tree.

Towards the end of the week, when Maggie was not at her part-time job, we set ourselves to prepare a meal of lamb biryani for the first time, using a recipe I had clipped from the newspaper a couple of weeks earlier. (This would also be the first time we had cooked using quinoa!)

First, we made a pot of tea and sat down on our couch (sofa), to read the recipe thoroughly and discuss it as we went along. By the time our teacups were empty, we had made several decisions: “simmer” the biryani in the oven at about 140C, rather than on the cooktop; reduce the quantities of rice and quinoa by one-third, par-cook them by boiling in a saucepan on the cooktop for 6 to 7 minutes, and reduce the amount of water added to the lamb with the grains by one-third also; use four onions rather than five; replace the cashew nuts with halves of blanched almonds; ditch the potato – one source too many of carbs and starch – and replace it with carrot; and cook some fresh peas to fold through the dish just before serving it; and, for us, no raita or coriander leaves.

All of these modifications worked well for our palates, as did some minor adjustments that we made as we worked our way through the method: a bit more oil, and a generous pinch of salt, when browning the onions; add all the cooked onion to the lamb rather than holding some back as a garnish; and a one-third reduction in the amount of butter and milk.

I can’t recall exactly how long we cooked the biryani in the oven; it was less than the specified 90 minutes, but every case will vary according to the meat and the oven. Having begun with 500g of lamb – enough for half the recipe – we had a good dinner each, a weekend light lunch for Julian & Sara, a workday lunch for Maggie and a snack for me. That’s my snack in the photo, not especially handsome and a bit light on for lamb and almonds; unlike Maggie’s lunch serve!

We were so pleased with how this dish tasted that we borrowed ideas from the recipe to prepare another biryani-style of dish a couple of days later, using some leftover roasted pork belly. As she diced the pork meat, Maggie removed most of the fat and I then used that and some vegetable oil to roast some pieces of pumpkin and beetroot to serve with the pork biryani. The plate was completed by steamed some bok choy, drizzled with vegetable oil and soy sauce.

Before I eat this plate of leftovers, I will steam some more bok choy, a preferred side-dish with roasted pork belly in our home.

To end this post, I give you an emblem of the change of season – the last rose bloom in our garden, picked just before the wintry winds arrived last week. 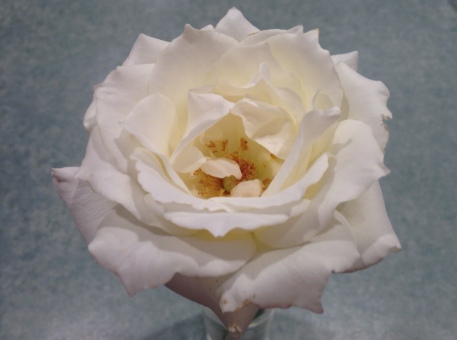 Maggie and I are both in our mid-60s and live in Melbourne, Australia. This blog is devoted to our shared passions for travel and fine dining at home. As cooks, we are skilful and adventurous within a framework of mainly traditional ingredients and techniques, and we aim to prepare nutritious food that looks good and tastes delicious. Our evolving repertoire is influenced by both our travels and Melbourne's vibrant food culture. While we are young enough, our priority travel destinations are overseas, although we do spend a few long weekends each year exploring parts of south-eastern Australia. As travellers, we are most comfortable with a combination of organised and independent touring. Our first overseas journey together was to Italy in the northern autumn of 2008. We later travelled in France (2009), Spain (2011), Singapore and Cambodia (2012/13). All trips from 2014 to 2016 are documented in this blog. When time allows, we will publish posts about our journeys - eight and counting - in 2017, 2018 and 2019
View all posts by rmgtravelsandfood →
This entry was posted in Cooking and tagged biryani, lamb biryani. Bookmark the permalink.