Posted on May 2, 2016 by rmgtravelsandfood

A couple of weeks ago, Maggie and I had a couple of novel experiences.

The first: we sat down to a fancy meal prepared by my son, Julian.

And it was good, very good in fact. A tasty rendition of a chicken biryani; whole green beans stir fried with long pepper segments; and a salad – made according to a recipe by Yotam Ottolenghi – of roasted cauliflower, slices of celery, chopped roasted hazelnuts, pomegranate seeds, herbs and a tangy dressing.

The salad delivered new and attractive sensations to our palates. We found it quite inspiring and told Julian so. Maggie was so enthusiastic that we had to stop at a market on our way home so she could buy a pomegranate for us to use.

A few days later, Google helped me find the recipe, which had been reproduced in the New York Times. We made the salad to accompany pork fillet which we had coated in berbere spice and roasted in our Weber Q. We were very happy with how the salad turned out, albeit with some modifications to the recipe: less heat when roasting the cauliflower; substituting our vinaigrette for the recommended dressing; and, for us, no coriander leaves. 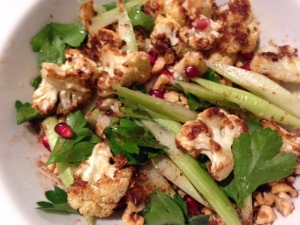 Thanks to Julian, I had contracted the Ottolenghi bug! (And there I was, the father who had always assumed that he would teach his son about cooking.)

With lemons starting to ripen on our tree, I went searching again to see what new uses we might make of them. The Ottolenghi recipe we chose was for a tomato-based salad, including some roasted slices of lemon. The salad was refreshing and what we most liked about it was the lemon component, so much so that we found ways to use the leftover slices in side-dishes for two subsequent meals.

We will make another batch of the roasted lemon soon and, when we do, I’ll share some photos and some tips on how to get the best result.

Maggie and I are both in our mid-60s and live in Melbourne, Australia. This blog is devoted to our shared passions for travel and fine dining at home. As cooks, we are skilful and adventurous within a framework of mainly traditional ingredients and techniques, and we aim to prepare nutritious food that looks good and tastes delicious. Our evolving repertoire is influenced by both our travels and Melbourne's vibrant food culture. While we are young enough, our priority travel destinations are overseas, although we do spend a few long weekends each year exploring parts of south-eastern Australia. As travellers, we are most comfortable with a combination of organised and independent touring. Our first overseas journey together was to Italy in the northern autumn of 2008. We later travelled in France (2009), Spain (2011), Singapore and Cambodia (2012/13). All trips from 2014 to 2016 are documented in this blog. When time allows, we will publish posts about our journeys - eight and counting - in 2017, 2018 and 2019
View all posts by rmgtravelsandfood →
This entry was posted in Cooking and tagged Berbere spice, cauliflower, pomegranate, pork fillet, salads. Bookmark the permalink.