Posted on February 23, 2016 by rmgtravelsandfood

I have never been anywhere close to the Texas-Mexico border-lands frequented by the fictional Cisco Kid and his side-kick Pancho, but I would be surprised if you couldn’t find a taberna with gazpacho – my favourite tomato soup – on its sunny-season menu.

I first made gazpacho in the southern summer of 1981/82. I was living in Fremantle at my new friend Bill’s home and, over the course of that summer, we established a Saturday lunch tradition. We’d have Jimmy Buffet on the record player, cruising his way through Margaritaville, searching for his ‘lost shaker of salt’; a tasty terrine and French breadstick from Fremantle Markets; and bowls of my rustic gazpacho, prepared according to a recipe card from a Robert Carrier box set handed down from my mother. And bubbles in glasses, lots of bubbles. All shared with a few friends on the basis of whoever was around at the time.

That gazpacho recipe used all the traditional ingredients but, rather than machine-blending, it relied on a couple of hours of steeping for the flavours to inter-mingle. I was happy with the result but, by the following summer, life had become more earnest, my culinary enthusiasms had moved on and I rarely gave it another thought.

Three decades later, Maggie and I visited Spain for just over two weeks. During our travels, I enjoyed several bowls of blended gazpacho and resolved to bring it back into my repertoire. When the following summer’s fresh tomatoes ripened on our bushes, I drew on a couple of published recipes and my own trial and error to produce a dish that is both rich and refreshing.

How easy is that? The amount of salt and sugar you add will depend on your personal preferences and also on the ingredients in the tomato juice you buy. If you use a no-added-salt juice, you might, like Jimmy Buffet, need to find your salt shaker!

To serve the gazpacho for 4 persons, we make croutons from 2 trimmed, thick slices of sour dough bread, coarsely cubed and tossed with two crushed cloves of garlic, olive oil, salt and pepper, then fried in a lightweight non-stick pan over medium heat until golden brown. This method reduces the quantity of both garlic and bread in the actual soup, making it pleasurable for a wide range of palates.

Don’t be alarmed by the pale colour of the gazpacho just after it has been blended. That’s just a temporary side-effect of the blending process, as you can see by the colour of the bowl I served myself last night. 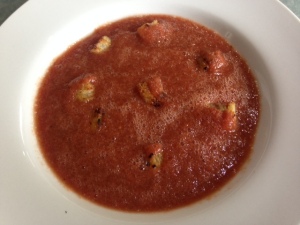 As I prepare to publish this post, it is 31 degrees celsius in the shade at 10am, on its way to 38 degrees. I will definitely be looking forward to another bowl of gazpacho, possibly for both lunch and dinner!

Maggie and I were both born in the early 1950s and we live in Melbourne, Australia. This blog is mainly devoted to our shared passions for travel and fine dining at home. Recently, I added Australian politics to the scope of the blog, inspired by the election of a Labor Government at a national level. Rick Grounds
View all posts by rmgtravelsandfood →
This entry was posted in Cooking and tagged Gazpacho, Jimmy Buffet, recipe for gazpacho, Soups, The Cisco Kid, tomatoes. Bookmark the permalink.