Posted on February 2, 2016 by rmgtravelsandfood

Maggie and I have just been through two weeks of anxiety and stress involving a health scare. Thankfully, an investigative procedure has found no evidence of anything life-threatening and, as of Saturday evening, we have stopped stress-eating and have resumed normal programming in our kitchen.

Prior to being probed, Maggie had to endure – exactly the correct word in her case – two days of plain food; or no food at all, unless you classify lemon-flavoured jelly as a food. So, she insisted that this brief period of purgatory be bookended by a feed of beef. As you do.

Naturellement, we turned to Mastering the art of French cooking for inspiration. The majority of the beef recipes are better suited to the cooler months of the year and involve much preparation and long, slow cooking. However, there were also some straightforward recipes for pan-fried fillets of beef accompanied by a sauce. We selected the bifteck au poivre, partly to compare the result with the dish of pepper steak that I have been making for 20 years.

The result was stunningly delicious. By following this recipe, we had acquired new knowledge and skills, ranging from the quantity and texture of the pepper, to preparing our pan (skillet) to cook the steaks, preparing the pan to make the sauce, ingredients for the sauce, and then making the sauce.

Here is my favourite lesson from this experience: when you are heating butter in which you intend to sear or brown a piece of meat, wait until the butter has almost finished foaming. Why? Because the foam is caused by evaporation of the water in the butter, and the temperature at which water boils is much less than the preferred temperature for the cooking process. D’accord?

The next meal of beef – prepared after Maggie had received her good news and then enjoyed a deep recuperative snooze – used a recipe from the same genre. This time the steaks were served with a mushroom and madeira sauce (we substituted an Australian port-style wine for the madeira).

Again, the recipe worked very well and, although Maggie was impatient, born of hunger, to take her seat at the dinner table, I did persuade her to wait long enough for her to take a photo of my plate.

The book is justly renowned for its educative qualities, precision and detail. We can now vouch for that! In both cases, we made some minor modifications according to our personal tastes: we made more sauce than the recipes would have apportioned to our weight of meat; and we finished each sauce with a little cream, instead of butter. 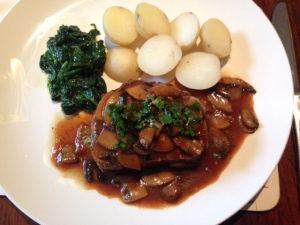 For the next evening’s main meal, we had thawed out the small turkey breast that had spent the fortnight in the freezer, pending the , sorry, outcome of Maggie’s procedure. We had decided to roast a piece of turkey during the festive season after all, inspired by what a friend had served to us at her home. So, we ordered a smallish breast from our favourite butcher, NOT from our preferred supplier of non-routine poultry. That was our first faux pas; more were to follow.

To prepare the turkey for cooking, Maggie lay the piece flat on its skin and then used a long, sharp knife to cut sideways into the two halves and open the meat up like the leaves of a fold-out book. This technique provides more surface area for a stuffing and reduces the thickness of the flesh to a more appealing scale.

For the stuffing, we combined some brown shallot, finely chopped and sauteed in butter; breadcrumbs and chopped roasted chestnuts; a green apple, peeled, cored and chopped; chopped parsley, thyme and sage; orange zest; some dried currants and the warm orange juice in which they were softened; salt, pepper and olive oil; and an egg yolk. Maggie spread the stuffing over the flesh, rolled up the breast and secured it with kitchen string. 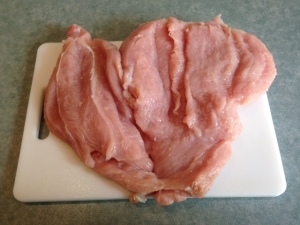 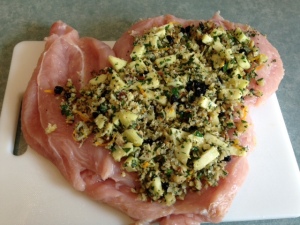 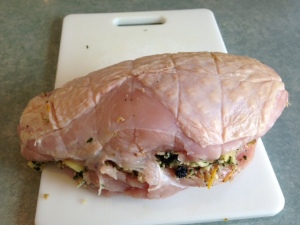 So far, so good. What could possibly go wrong? Well, quite a lot, as it turned out.

Based on previous successful experiences with a larger turkey breast, we roasted it for about 45 minutes. When we inserted a metal skewer into the flesh, the modest trickle of juices looked clear enough, so we agreed that it was cooked. However, if you look closely at the photo below of two of the slices we produced by cutting across the breast, you might just discern some pink flesh at the heart of each piece and you will certainly be able to see that the pieces of apple in the stuffing were still ‘entire’. 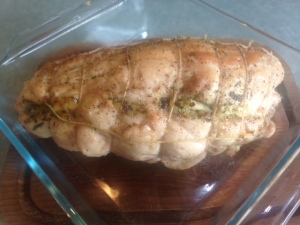 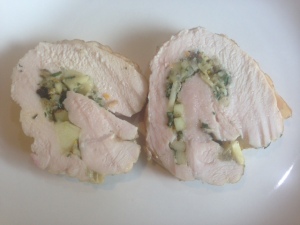 Diagnosis: I should have removed the stuffed breast from the fridge much earlier (first time I have made that mistake); it should have gone into a cold oven and slowly come up to temperature, rather than an oven that was still warm from baking a plum cake; the apple should have been grated; and the modest size of the breast was never going to require enough cooking time to transform the stuffing into an attractive element of the dish.

We made a tolerable meal with some of the meat that WAS properly cooked and, tonight, when we heat up the balance, we will take steps to remedy our mistakes. Not sure quite how, just yet, but I’m working on it.

Maggie returned to work the next morning, leaving me to contemplate the fate of some zucchini, which our wonderful Greek neighbours had given us, picked fresh from their garden.

For inspiration, I turned to one of our reliable cookbooks and found a simple recipe for a zucchini soup. I added a little extra complexity and produced a passable, blended soup which is destined to be frozen in tubs for our grand-daughter Iris.

To use the balance of the zucchini, I took a recipe I had found for the cooking group I support at an aged-care facility and tweaked it in various ways to make it compatible with some lamb chops we planned to cook on our barbecue. Hence the (Greek) feta, fresh parsley and mint.

The recipe is enough to produce eight fritters, about 8cm square and 5-6mm thick. We accompanied them with a simple salsa of chopped ripe tomatoes, chopped basil leaves, seasoning and a splash of balsamic vinegar.

Maggie and I were both born in the early 1950s and we live in Melbourne, Australia. This blog is mainly devoted to our shared passions for travel and fine dining at home. Recently, I added Australian politics to the scope of the blog, inspired by the election of a Labor Government at a national level. Rick Grounds
View all posts by rmgtravelsandfood →
This entry was posted in Cooking and tagged French cooking, Julia Child, recipe for zucchini soup, turkey breast, zucchini. Bookmark the permalink.