Scenes from a short tour of Britain

Posted on October 3, 2015 by rmgtravelsandfood

Maggie and I arrived in London on 10 September. Three days later, at 7.30am, we joined a six-night, seven-day tour of Britain. This post presents photographic highlights of the tour, accompanied by a brief account of the journey.

From London, our Tour Director, Michelle and coach-driver, Alf took us to Stratford-upon-Avon, famous for being the town where William Shakespeare spent much of his life. The house where he was born and raised is now a museum, somewhat amateurish in presentation but much the better for the presence of two actors performing on-demand excerpts from the bard’s works. 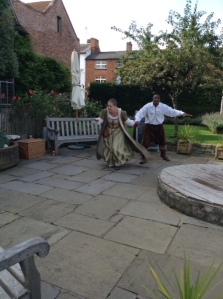 Later in the day, we arrived in York, with its renowned Minster and medieval heart. It is less well known as the birthplace – more infamous than famous – of Guy Fawkes, chief conspirator behind the oh-so-close-to-successful plot to blow up the British Houses of Parliament in the presence of King James I. We would have been quite happy to spend more time in York. 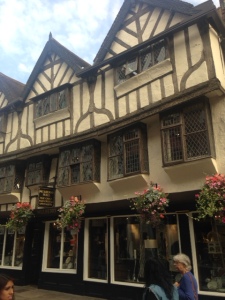 The second day began with a drive through mist and drizzle towards Scotland and its capital, Edinburgh. Along the way, we visited one of the few meaningful remnants of Hadrian’s wall, visited an impressive organic pig farm, enjoyed vistas of the season’s bloomin’ heather and crossed the border to the strains of a lone ‘piper. 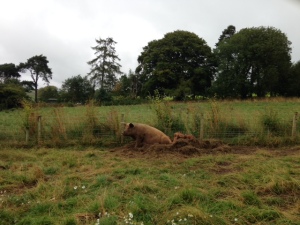 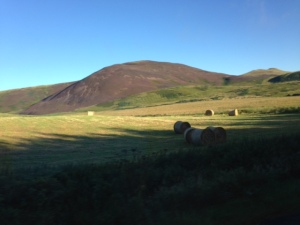 Maggie and I had dinner in the modern restaurant attached to our comfortable hotel – an attractive serve of bresaola for her and a vibrant dish of squid-ink infused rice and a pureed-and-filtered parsley sauce for me.

The sky cleared overnight to bless our tour of the city and its famous castle with bright sunshine. We entered the castle through the precinct that is used for the annual military tattoo. It has been staged recently and the purpose-built seating was still being removed. 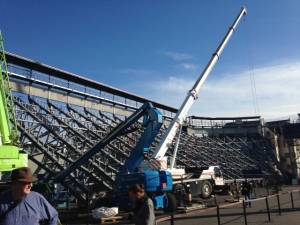 The castle is very imposing and we enjoyed wonderful views on a picture-perfect day.

The Royal Mile, the collective name for the streets that run from the castle down to Holyrood Palace, also boasts many buildings that underline Edinburgh’s status as a city of standing. 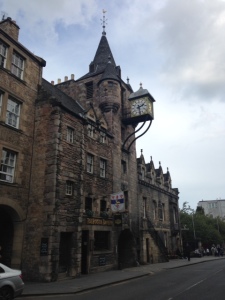 On the fourth day, the fine weather held good as we made our way to the Lake District, with its picturesque mix of hills, green fields, dry-stone fences and water bodies. A ferry took our tour group across Windermere to rejoin Alf and his coach for the trip to Liverpool. 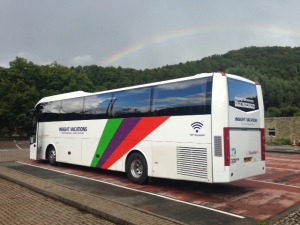 Liverpool has many virtues as a destination – our hotel was NOT one of them – but our group of ageing baby-boomers was especially interested in the city’s associations with The Beatles. The actual Penny Lane and a sculpture that featured some guitar cases were but two of too-many-to-count sites to which our local guide took us.

Next morning, we visited the town of Chester. Its features include substantial remnants of the medieval town walls, buildings renovated in a 19th century version of ‘mock Tudor’ and St Werburgh’s Cathedral. During our visit to the attractive gothic cathedral, I bought a ‘brick’ to add to a lego model of the edifice – a novel and appealing fund-raising method! 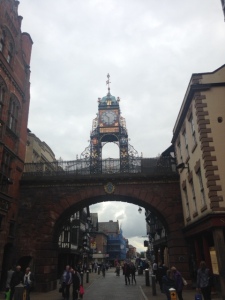 From Chester, we crossed into Wales and stopped for lunch in the walled town of Conwy – pronounced Conway. This was one of many fortifications built at the behest of Edward I to control the locals!

After lunch, we headed south into an area where slate – used for roofing in the UK and far beyond – has been mined for many centuries. Most of the mines have closed but and the slate is transported by road but there is a surviving narrow-gauge railway line that carries tourists from the village of Blaenau Ffestiniog to the coastal town of Porthmadog.

After a night in Conwy, we travelled to the pretty village of Llangollen – if I tried to pronounce that one for you, I could be arrested for swearing – where we had a delicious cup of coffee at a cafe recommended by Michelle. We admired the rive Dee and explored the main street, where I was struck by the wording on the First World War memorial: “They whom this memorial commemorates, were numbered among those who, at the call of King and country, left all that was dear to them and, finally, passed out of the sight of men by the path of duty and self-sacrifice, giving up their own lives that others might live in freedom. Let those who come after, see to it that their names be not forgotten.”

With these poignant words still fresh in our minds, our tour then took us across the border to Ludlow, a town with a vibrant medieval heart. And a pub that boasted a menu of more than forty pies; we shared the chicken and mushroom pie with chips and fresh peas sitting in a tidal pool of gravy.

After lunch, our route hugged the England-Wales border, including a mid-afternoon stop at the ruins of Tintern Abbey, mostly dating from the late 13th century, and in disuse since the dissolution of monasteries under Henry VIII. Our group also spent some time at a nearby pub specialising in traditional cider, or ‘scrumpy’. At 10% alcohol, half a pint was sufficient enjoyment.

After an overnight stay at Bristol, the last day of our tour took us to two famous destinations – Bath and Stonehenge. After viewing the mist-shrouded Georgian beauty of Royal Crescent, we arrived at the Roman Baths. Equipped with a map and an audio guide, Maggie and I spent a good hour taking in the extensive baths site, which had been excavated, conserved and presented to a very high standard. We concluded our visit with a delightful, yet inexpensive, morning tea experience in the site’s tea salon, complete with a trio of pianist, violinist and cellist.

We reached Stonehenge early in the afternoon of a sunny and warm day. We’re not sure how highly to rate this destination. Clearly, its construction is monumental, both physically and intellectually. For us, it wanted for something that we can’t quite grasp at this point; a viewing at sunset on a day of equinox or solstice would probably do the trick?

By 5pm on the seventh day, we were back at our starting point in London, very satisfied with our latest touring experience. We are happy to recommend this tour for anyone who would like to visit several scenic highlights of Britain, in a relatively short time, with a good variety of natural and built places of interest. In our feedback to Insight Vacations, we have given a thumbs-down to Stratford-upon-Avon and suggested that it be replaced with more time in York. Otherwise, the itinerary more than met our expectations.

Maggie and I were both born in the early 1950s and we live in Melbourne, Australia. This blog is mainly devoted to our shared passions for travel and fine dining at home. Recently, I added Australian politics to the scope of the blog, inspired by the election of a Labor Government at a national level. Rick Grounds
View all posts by rmgtravelsandfood →
This entry was posted in Travel and tagged Bath, Britain, Chester, Conwy, Edinburgh, England, Hadrian's Wall, Insight Vacations, Lake District, Stonehenge, Wales, York. Bookmark the permalink.