Posted on September 2, 2015 by rmgtravelsandfood

Eggs, bacon, mushrooms – what’s not to like, with some thyme, garlic and cream added to the mix? And look, hassle-free plating and only one cooking pan. 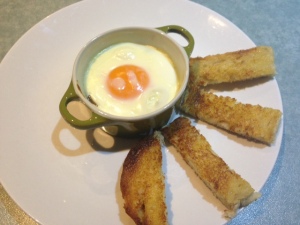 When Julian & Sara married in December 2012, we gave them a lovely Le Creuset casserole dish, aka Dutch oven. As part of the deal, another Le Creuset product was offered at a big discount – a set of ramekins known in France as ‘cocottes’. Believing our kitchen was already well-stocked with baking dishes, I resisted this temptation. Maggie dug her heels in and the rest, as they say, is her-story!

This is a regular match-play in our home. The next stanza kicks off with me saying “well, you’d better find a recipe then”, followed an hour or two later by a rejoinder of “tah dah!” So, several times each year, especially in the cooler months, we sit down to a lazy dinner of ‘oeufs en cocotte’.

We start by frying some batons of trimmed bacon in a little oil in a pan until they are just beginning to brown. We transfer the bacon to a bowl, add about 10g of butter to the pan and add some thickly-sliced mushroom. At this point, I put a lid on the pan, slightly ajar, to encourage the mushroom to release some of its water content – this saves having to add some more butter. Then I remove the lid, add some thin slices of garlic and cook until the mushroom is just beginning to brown. This mixture is added to the bacon, along with a generous grind of black pepper and leaves plucked off some thyme sprigs, then tossed to combine.

Maggie distributes the mixture between three or four cocottes – this is a method, not a recipe – and covers it with a tablespoon or so of (light) sour cream (creme fraiche). Then she cracks a fresh egg into each cocotte and drizzles each one with some cooking cream.

We place the cocottes onto a baking tray and put the tray into an oven pre-heated to about 170C. It takes up to 15 minutes to cook the eggs; you can easily monitor progress through the thin layer of cream. Maggie likes to serve some ‘soldiers’ of toasted sourdough alongside her cocotte; I prefer a whole slice of toast, onto to which I empty the contents of my cocotte. Either way, it is very tasty, with lovely textures.

Maggie and I were both born in the early 1950s and we live in Melbourne, Australia. This blog is mainly devoted to our shared passions for travel and fine dining at home. Recently, I added Australian politics to the scope of the blog, inspired by the election of a Labor Government at a national level. Rick Grounds
View all posts by rmgtravelsandfood →
This entry was posted in Cooking and tagged eggs, oeufs en cocotte. Bookmark the permalink.