Posted on June 24, 2015 by rmgtravelsandfood

This is the first in a short series of posts about our recent visit to the Barossa Valley, Australia’s most famous wine region.

We had identified the Barossa as somewhere we would like to explore together one day. Maggie had only ever been there for a few hours, so she was keen; and I had fond memories from two previous visits – scenery, riesling and a particularly idiosyncratic winery – so I was up for it. Then Maggie spotted a package deal through Flight Centre, offered at a budget price that reflected the low season that kicks in for the southern half of Australia after the June long weekend. So, we went.

Our first day started with an early plane flight to Adelaide and, by 10am, we were in our rental car and well on our way to the Eden Valley, a smaller but significant wine region immediately to the east of the Barossa. Eden Valley is quite high in altitude, which lends itself to the production of riesling wines that age well. and to the long slow ripening of shiraz grapes. However, the region is sparsely populated, so much of the fruit grown there is taken to a winery in the Barossa to be processed. The main exception to this is Henschke.

The Henschke family has been making wines commercially since the late 1860s and their riesling and shiraz wines have been renowned for as long as I can remember. Indeed, Henschke riesling was one of the first wines to which I was introduced by my parents, usually to accompany a dish of scallops or whiting. So, you can imagine my disappointment when we arrived at the cellar door and were told that their riesling was sold out. However, we did taste a range of other white wines – some made from fruit grown in the Adelaide Hills, where sauvignon blanc and chardonnay both perform better than in the Eden Valley. 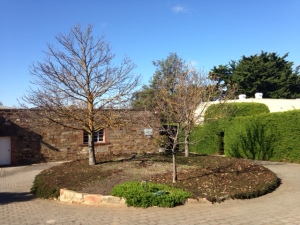 It was a cold morning and we had been up for several hours, so we needed to eat something warming and substantial. The cellar door staff pointed us in the direction of Roaring 40s, a relaxed diner much awarded for its pizzas. A short drive took us down to Angaston, and we were soon seated and ready to order. We were tempted by several of the pizzas, but chose the one with half-a-dozen locally-made smallgoods, thinking it would be a good introduction to the flavours of the Barossa. It was delicious, one of the best pizzas we had ever had. One small pizza shared, a glass of in-house aged red wine each and we left very satisfied. 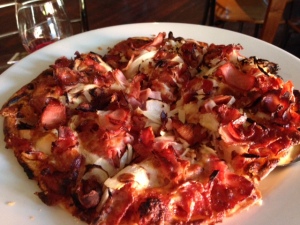 Angaston is one of five small towns in the Barossa and used to be famous for the production of dried fruits under the Angas Park brand; alas, the factory and associated shop closed a couple of years ago as new owners moved to rationalise and centralise their production facilities. But Angaston is still famous as the home of Yalumba Wines, the oldest family-owned winery in Australia, and that was our next destination.

In the afternoon of a sunny winter Thursday, outside school holidays, it was peaceful and quiet at Yalumba. After admiring the gardens and well-maintained old buildings, we had an unhurried wine-tasting, provided by a friendly and knowledgeable member of staff. We had come to taste white wines and we were not disappointed, taking away an aged Pewsey Vale riesling – another of the wines my parents favoured – and a modern chardonnay, made from fruit grown in the cooler Adelaide Hills; Maggie added a liqueur muscat, you know, just to make up the numbers for a three-pack. 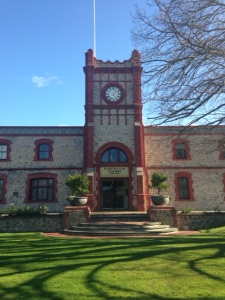 Heritage is valued at Yalumba

From Yalumba, we headed west in search of the famous Maggie Beer farm shop. A map-reading lapse on my part – now a recurring theme when we visit wine regions – took us past the turn-off and we were soon in the location of Seppeltsfield, the birthplace of the Seppelt wine brand, established in 1851.

I had visited Seppeltsfield more than a decade earlier and had vivid memories of its many heritage buildings, some dating from the late 1860s. However, the property was sold in 2007 – the separated Seppelt brand is now based in Victoria – and the new owners have since invested heavily in a modernisation program – including a glossy, up-to-the-minute restaurant – to attract a larger number of visitors and encourage them to spend well while they are there. 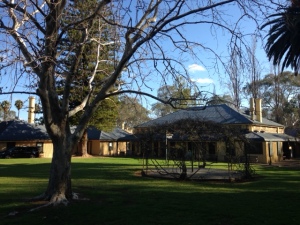 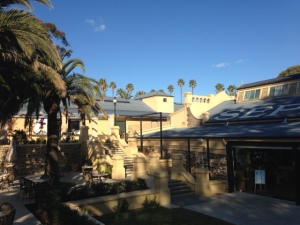 Call me old-fashioned, but I prefer the look and feel of Seppeltsfield as it was. I understand the need to provide facilities and services that compete in the contemporary market but it feels a bit overdone to me; perhaps a few years of ageing will soften the edges. The overall setting is still quite special, including the Seppelt family mausoleum on the far eastern edge of the property. And the premium sherry-style wines, now made under the new ‘Seppeltsfield’ brand, still have the benchmark qualities of their predecessors.

As the shadows began to lengthen, we retraced our steps towards Maggie Beer’s establishment, where we had a badly-needed pot of refreshing tea. Maggie Beer is a much-loved and influential figure in Australian food and cooking. Although it is many years since she closed her restaurant, she continues to produce a wide range of pates, condiments, preserves, ice-creams and cooking ingredients which are sold at the Farm Shop and distributed widely around Australia. Cooking demonstrations are held regularly in the purpose-built facility, which was also the setting for the popular The cook and the chef television series. 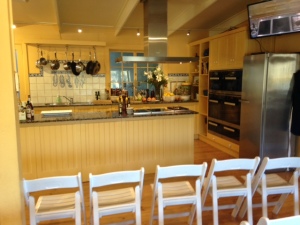 We returned to the main road that runs through the Barossa, headed south and soon came to Tanunda, the region’s largest town and home to the main Visitor Information Centre. We picked up a regional map and some dining-out tips and went looking for our accommodation, the Novotel Barossa Valley Resort. Unfortunately, I gave my directional instructions to Maggie based on the old map I had brought from home. I got us lost. At least three times! So, we got to see much of the western half of the valley, which was quite scenic in its own way and also illuminating for the extent of new vineyards. So, a case of the proverbial ill wind?

Happily, we did find our way to the Novotel just before sunset – it was along a windy, narrow road that would have challenged us in the dark – and we were soon taking advantage of our spacious room and the resort’s food and beverage facilities.

Maggie and I were both born in the early 1950s and we live in Melbourne, Australia. This blog is mainly devoted to our shared passions for travel and fine dining at home. Recently, I added Australian politics to the scope of the blog, inspired by the election of a Labor Government at a national level. Rick Grounds
View all posts by rmgtravelsandfood →
This entry was posted in Eating out, Travel, Wine and tagged Barossa Valley, Henschke, Maggie Beer, Novotel Barossa Valley, Seppeltsfield, Yalumba. Bookmark the permalink.