I have a vivid memory from childhood of Mum preparing bisque using a packet of dried ingredients imported from continental Europe. I was intrigued by how some water and cream could convert the packet’s contents into a premium soup. In 2010, I finally got around to trying my hand at making bisque from scratch. I began with a recipe from Doyle’s Sydney seafood restaurant, to which we have made several modifications.

This dish originates from the Atlantic coast of France and evolved as an appealing way of using crustacea that were not of a marketable appearance but were quite edible. The seafood would be used whole to make a stock, which was then drained to provide the base for a soup. Ultra-traditionalists would then crush the heads and shells and incorporate them in the dish, much as they would in seafood crepes. (Several years ago, we made the latter and produced a dish that Maggie and my late mother consumed with delight, whereas my system couldn’t cope with the over-the-top richness.)

Our version of bisque is much simpler and varies from the traditional bisque in several ways. We use off-the-shelf stock, add the aromatic vegetables to the mix and use some fish as well as prawns.  Sacré bleu! So, it could be somewhat risky to serve this to a French guest. That said, it is so delicious that my son, Julian sent me a rare text message of food praise after he and Sara had “downed” – as in ‘went down a treat’ – a bowl each.

20g butter
250g Atlantic salmon (or another full-bodied fish), coarsely diced (we sometimes use minced salmon, bought at a good price if a convenient fishmonger carries it)
250-300g of raw prawn meat (you must choose a prawn with a flavour that you enjoy; in our case, that rules out those known as ‘banana’ prawns in Melbourne)
1 each of a small onion, leek, medium carrot, stick of celery and garlic clove
¼ tsp chilli flakes
2 tsp tomato paste
125ml dry white wine
200g Nicola potato, peeled and cut into chunks
750ml fish stock
500ml vegetable stock
salt and pepper
50ml thick cream 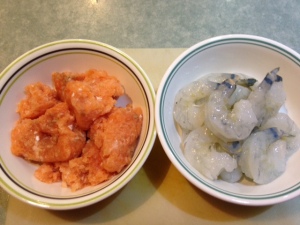 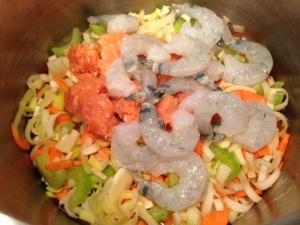 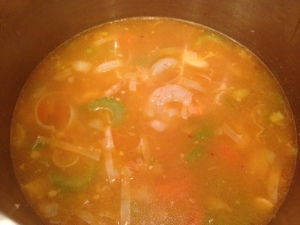 Maggie and I are both in our mid-60s and live in Melbourne, Australia. This blog is devoted to our shared passions for travel and fine dining at home. As cooks, we are skilful and adventurous within a framework of mainly traditional ingredients and techniques, and we aim to prepare nutritious food that looks good and tastes delicious. Our evolving repertoire is influenced by both our travels and Melbourne's vibrant food culture. While we are young enough, our priority travel destinations are overseas, although we do spend a few long weekends each year exploring parts of south-eastern Australia. As travellers, we are most comfortable with a combination of organised and independent touring. Our first overseas journey together was to Italy in the northern autumn of 2008. We later travelled in France (2009), Spain (2011), Singapore and Cambodia (2012/13). All trips from 2014 to 2016 are documented in this blog. When time allows, we will publish posts about our journeys - eight and counting - in 2017, 2018 and 2019
View all posts by rmgtravelsandfood →
This entry was posted in Cooking and tagged Atlantic salmon, bisque, prawns, recipe for bisque. Bookmark the permalink.