Posted on January 12, 2015 by rmgtravelsandfood

The title of this post is an obscure pun on the dish we cooked last night and the name of a 1960s North American band formed by Neil Young – one of my top three musical heroes – and the talented egotist Stephen Stills. So, my apologies for being simultaneously corny and opaque when one such sin should suffice.

A month or so before Christmas, I received a tweet that told me buffalo meat was available at Cester’s, our preferred supplier of duck, quail, spatchcock and goat. We’d never cooked a meal of buffalo, so we decided to give it a go and bought about 500g of buffalo fillet, cryovac-protected and frozen. Late last week, with our menu of festive food tapering towards normal summer programming, we decided to go to work on the buffalo.

But what to cook?

A search of cyberspace was not very illuminating, mostly throwing up recipes for buffalo burgers and the like. To be fair, one of the virtues of buffalo meat is its low fat content, so you do run the risk of cooking up a plate of something dry and unappetising. So, a burger appeals as a safe option, but Maggie and I don’t do safe in the kitchen! Well, at least, not when planning a meal.

In light of our recent meal of beef wellington, it was tempting to give the buffalo fillet much the same treatment, using leftover sheets of the puff pastry. But close-on-the-heels-of-success repetition is both safe and palate-dulling. Then I remembered another dish we make from time to time – well, every couple of years, for reasons that will soon become as clear as melted butter – using a piece of beef fillet. Maggie calls it her ‘green’ steak; in the printed collection of our favourite recipes, I have given it the more wannabe-cheffy moniker ‘roast eye fillet au verd’. 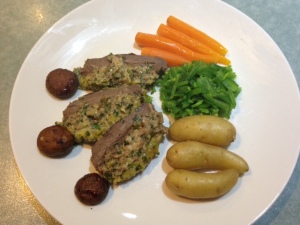 A plate of buffalo fillet ‘au verd’ and companions

To complete the dish, we added some whole mushrooms, seasoned, tossed in olive oil and roasted alongside the buffalo; Dutch carrots, peeled and cooked by reduction method in water, a little sugar and a little butter; fresh green beans; and some of our homegrown kipflers, boiled until just cooked. There was enough meat for three adults, four at a pinch.

What was is it like? As you would expect, similar to beef; soft but not melt-in-the-mouth, possibly a lighter flavour; but I’d need to taste them side by side to be sure. No obvious wow factor, but I enjoyed the plate of food very much, believe we made a good decision about ingredients and method and would do it again without making any changes.

Maggie and I are both in our late 60s and live in Melbourne, Australia. This blog is devoted to our shared passions for travel and fine dining at home. As cooks, we are skilful and adventurous within a framework of mainly traditional ingredients and techniques, and we aim to prepare nutritious food that looks good and tastes delicious. Our evolving repertoire is influenced by both our travels and Melbourne's vibrant food culture. From 2008 to early 2020, our priority travel destinations were overseas, although we have always spent a bit of time each year exploring parts of Australia. Our first overseas journey together was to Italy in the northern autumn of 2008. We later travelled in France (2009), Spain (2011), Singapore and Cambodia (2012/13). Most of our international adventures from 2014 to 2020 are covered in this blog. We have now reached a time in our lives when the prospect of long flights to distant places are unappealing, so we will travel mainly within Australia or to countries that are close to home.
View all posts by rmgtravelsandfood →
This entry was posted in Cooking and tagged buffalo meat, Cesters. Bookmark the permalink.