Posted on November 15, 2014 by rmgtravelsandfood

A common theme in the post-colonial histories of North America and Australasia is the rise and fall of rural towns. In some cases, a meteoric rise fuelled by the discovery of gold or another precious metal has inevitably been followed by collapse as the ore supply peaked then dissipated. The other version of this story has been driven by declines in the labour-intensity of agriculture, transport and government and retail services.

There are some instances of one or both of these occurrences in north-east Victoria. However, the region has been protected to some extent from the ravages of rural depopulation by a combination of enduring natural advantages and opportunities to offer products and services that cater for the vast market that is metropolitan Melbourne, just three hours away. 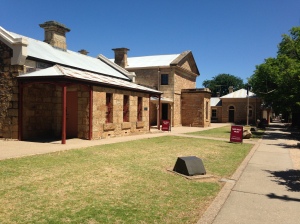 The photos of Beechworth above show the creek where gold was discovered in the 1850s, ushering in a boom period reflected in sturdy public buildings such as those in the second photo. Although Beechworth did fall back when the gold ran out, it had the dubious good fortune to be the site of a large prison, with its attendant workforce and demand for services. Over the last couple of decades, its stock of intact 19th century buildings and streetscapes have proven to be a drawcard for good-spending visitors from Melbourne, which has stimulated the establishment of a wide variety of retail and service businesses, which has attracted more visitors and so the virtuous cycle builds.

Deciduous trees are a popular feature of Bright

The prosperity of Bright has had more to do with natural advantages. It is the nearest town of any substance to the ski-fields at Mt Hotham and is a popular place to stop and refuel bodies and vehicles during the ski season. And, as accommodation at Mt Hotham is limited, many skiers use Bright as their base for day trips to the ski slopes. In addition, Bright is popular in its own right as an autumn destination when its avenues of deciduous trees change colour and local fresh produce such as premium nuts are at their peak; and in warmer months for travellers en route to high-country bushwalking trails.

The town of Mount Beauty at the foot of Mt Bogong

Mount Beauty is the last town on the way to the Falls Creek ski resort and its location is visually stunning. So, it gets some benefits from the ski season but not to the same extent as Bright, as the supply of accommodation at Falls Creek is much greater than at Mt Hotham. It is also a longer drive away from Melbourne, so the number of out-of-season visitors is much less. That said, its economy is stable and diverse enough that it can survive through the quieter months.

Other towns have similar stories to tell – Myrtleford, Milawa and Whtifield come to mind – making the region a satisfying and gently dynamic place in which to live, work or travel.

Maggie and I are both in our mid-60s and live in Melbourne, Australia. This blog is devoted to our shared passions for travel and fine dining at home. As cooks, we are skilful and adventurous within a framework of mainly traditional ingredients and techniques, and we aim to prepare nutritious food that looks good and tastes delicious. Our evolving repertoire is influenced by both our travels and Melbourne's vibrant food culture. While we are young enough, our priority travel destinations are overseas, although we do spend a few long weekends each year exploring parts of south-eastern Australia. As travellers, we are most comfortable with a combination of organised and independent touring. Our first overseas journey together was to Italy in the northern autumn of 2008. We later travelled in France (2009), Spain (2011), Singapore and Cambodia (2012/13). All trips from 2014 to 2016 are documented in this blog. When time allows, we will publish posts about our journeys - eight and counting - in 2017, 2018 and 2019
View all posts by rmgtravelsandfood →
This entry was posted in Travel and tagged Beechworth, Bright, Mt Beauty, north east Victoria. Bookmark the permalink.