A fish dish to celebrate our baby kipflers

Posted on October 27, 2014 by rmgtravelsandfood

By traditional Melbourne standards, our home and the land on which it sits are modest in size. The garden plots in front of the house are ill suited to growing edible plants, including their exposure to the harsh summer sun; so we have established a variety of hardy, flowering plants – Australian natives, roses and sasanquas.

At the rear of the house, there is an attractive paved area – home of the Weber Q and much used for al fresco wining and dining on mild afternoons and evenings. Along the fence sides of the paved area there is a series of raised beds. One bed juts out, to hold an elderly and revered lemon tree. The remaining raised beds tally to no more than 15 square metres; five of these are given over permanently to seven different herbs.

So, we have to be selective as to what we do with the balance of our arable land; it has taken us many of the nine years we have lived here to both improve the suitability of the soil and learn which edible plants give us the most pleasure and best value for our money, time and effort. In 2013, we decided that we would allocate about 5 square metres to a crop of potatoes, to be planted towards the end of winter for a late-Spring harvest.

We chose the kipfler variety – small, nutty-flavoured potatoes that just need some gentle boiling before being served alongside some not-too-robust protein that has also been cooked with a light touch. The result was thrilling! Around 6 kilograms of firm, tasty and – proud parent alert! – cute baby potatoes.

At the weekend, Maggie dug the first of five rows of potatoes from this year’s crop and, as had been the case in 2013, we chose to serve them alongside some pan-fried white fish. Last year, it was King George Whiting, our favourite fish to cook in a pan; this time, the better-value buy was garfish; just three slender fish, filleted and butterflied. 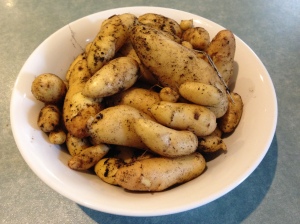 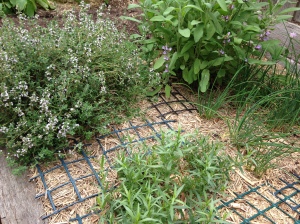 I prepared them for a light Saturday lunch in a meuniere style – a knob of unsalted butter, no oil, melted in a pan over medium heat, cooked skin-side up then a scant minute on the skin. The fillets were transferred to two plates in an oven heated to 75C then turned off.

I added another knob of butter off the heat, then some freshly-picked herbs Maggie had chopped – parsley, chives and a little tarragon; add the herbs to a hot pan and they will leap out in all directions! Then, over gentle heat, a couple of teaspoons of lemon juice and a similar amount of the Australian riesling wine I had chosen to accompany our lunch, a pinch or two of salt and some ground black pepper. Finally, some cooking cream. This last ingredient is not traditional but I prefer the texture of the resultant sauce and the way it stays with the fish when served. Voila! 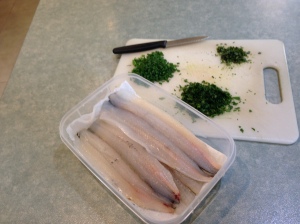 Maggie and I were both born in the early 1950s and we live in Melbourne, Australia. This blog is mainly devoted to our shared passions for travel and fine dining at home. Recently, I added Australian politics to the scope of the blog, inspired by the election of a Labor Government at a national level. Rick Grounds
View all posts by rmgtravelsandfood →
This entry was posted in Cooking, Home life and tagged garfish, herbs, kipfler potatoes, meuniere sauce. Bookmark the permalink.