In the page about our sources of recipes and cooking advice, I mention David Herbert. Maggie has only become aware of him since we began to live and cook together. During the previous eight years, which I spent living alone, David was one of the two greatest influences on my cooking skills, knowledge and repertoire. (Towards the end of this phase of my life, my ideal concept for a dwelling was a wonderful kitchen with an en-suite bedroom; fortunately, Maggie rescued me!)

In 2013, Penguin Australia published twelve Lantern Cookery Classics, each one devoted to time-tested recipes from an Australian cookery writer. We bought two copies – one copy for us, the other for a cooking group I support at an aged care facility in Melbourne.

One of the first recipes I tested with the cooking group was for lime and coconut cakes – they were very well received. On the weekend, Maggie and I made a batch, including a lime and sugar syrup that is spooned over the cakes after you have made several holes in each cake with a skewer. 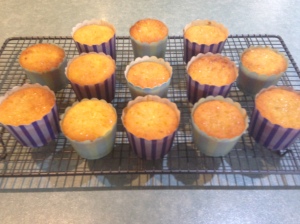 The publishers of David’s book have given me a link to the recipe to share with you:

Maggie and I are both in our late 60s and live in Melbourne, Australia. This blog is devoted to our shared passions for travel and fine dining at home. Recently, I added Australian politics to the scope of the blog, inspired by the election of a Labor Government at a national level. Rick Grounds
View all posts by rmgtravelsandfood →
This entry was posted in Cooking and tagged cake recipes, Lime, Melbourne food. Bookmark the permalink.

3 Responses to Lime and coconut cakes