The beef short rib is one of those ingredients that became more popular in Melbourne in the wake of the 2008 global financial crisis.  Restaurants turned to offal and cheaper cuts of meat as part of the effort to maintain a viable customer base.  This encouraged more meat wholesalers to supply such items, recipes began to appear in print and online and retail butchers got on board. Then the whole smoking/long braise/tex-mex/pulled meat craze hit town and the market for finger-cleaning products went off the scale!

Maggie and I rarely dine out in our home city. We have a tight budget when at home so we can splurge when we travel; and we can’t afford to eat at many places where the menu is superior to what we prepare in our own kitchen.

However, we do notice trends and, eventually, we make room in our cooking priorities for them. (An advantage of being a year or so behind trend is the volume of recipes available.) This winter, we first gave priority to versions of what we enjoyed in Europe earlier this year, before turning to beef short ribs.

So far, we have cooked two meals of beef short ribs using a different recipe each time. The first recipe, found online at http://www.smittenkitchen.com,  produced a high quality result. However, the flavours were in the same family as those of Coq au vin and Boeuf Bourguignon, two of our established favourites, so it wasn’t such a blast for our palates. The second attempt produced the sort of sticky-finger experience that Maggie had envisaged. We began with a recipe in a beef promotional pamphlet and modified it to suit our own tastes and methods. The ingredients produced enough for us to have a generous dinner each and a workday lunch for Maggie.

We served our ribs with crunchy homemade potato wedges and adorably sweet, roasted baby parsnip. I think there was something green on the plate too but it didn’t make it to a photo, nor to my palate memories! 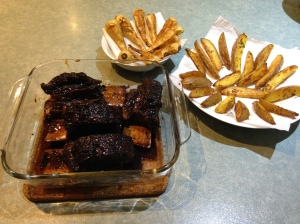 Maggie and I are both in our mid-60s and live in Melbourne, Australia. This blog is devoted to our shared passions for travel and fine dining at home. As cooks, we are skilful and adventurous within a framework of mainly traditional ingredients and techniques, and we aim to prepare nutritious food that looks good and tastes delicious. Our evolving repertoire is influenced by both our travels and Melbourne's vibrant food culture. While we are young enough, our priority travel destinations are overseas, although we do spend a few long weekends each year exploring parts of south-eastern Australia. As travellers, we are most comfortable with a combination of organised and independent touring. Our first overseas journey together was to Italy in the northern autumn of 2008. We later travelled in France (2009), Spain (2011), Singapore and Cambodia (2012/13). All trips from 2014 to 2016 are documented in this blog. When time allows, we will publish posts about our journeys - eight and counting - in 2017, 2018 and 2019
View all posts by rmgtravelsandfood →
This entry was posted in Cooking and tagged Beef short ribs, Melbourne food. Bookmark the permalink.