Posted on October 16, 2020 by rmgtravelsandfood

As I begin to write this post, it is 1pm local time and I, along with most of Melbourne’s five million residents, am anxiously awaiting the daily Covid-19 update from Victoria’s Premier and senior health officials.

The briefing is likely to take place later in the afternoon, once the latest test results are in from a district of the city where an unexpected cluster of Covid cases broke out last week just as it looked like the spread of the virus was under control. If the results are good, we expect there will be a significant easing of the tight restrictions (aka LOCKDOWN) that have been in place for nearly four months.

All of us are hoping that the retail and hospitality industries will, subject to various precautions, be able to open up and that we will be able to have persons visit our homes again, albeit two at a time. Oh to sit down for a good espresso or go shopping for, well, anything but daily essentials!

That is part of the explanation for the title of this post. The other source of its inspiration is the fact that we have just completed our third ‘Pandemic Puzzle’ and it was a doozie!

It is called the Melbourne Map Jigsaw Puzzle and it has become quite a ‘thing’. If you go to this link, you will find more information about how it was produced.

Here is a photo of the puzzle, taken soon after we put the last of the 1,000 small pieces in place. Taken as a whole, it is not easy to make out the various elements of the map, let alone some of the finer detail, so I’ll take you through a few close-ups, including places that some of you will have heard of or seen via various media.

The body of water below comprises the mouth of the Yarra River, that flows through Melbourne’s CBD, and the northernmost part of the bay that connects Melbourne to the Southern Ocean and beyond. 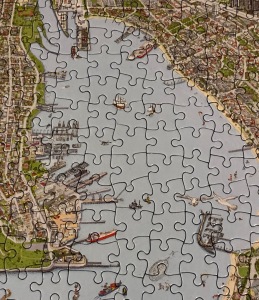 The next three photos cover most of Melbourne’s CBD: it’s heart, featuring the Yarra River and the iconic Flinders Street railway station (centre, right); the western end, including a revitalised waterfront precinct; and the eastern end, including the Parliamentary precinct, the beautiful Treasury Gardens, where we had our wedding photos taken in December 2006, and the larger Fitzroy Gardens.

Speaking of gardens, the city’s main Botanical Gardens dominate the next image. They are very popular with locals and visitors alike. 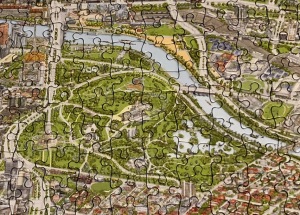 The final two images are for sports fans, beginning with Albert Park lake. The track for Melbourne’s F1 Grand Prix race circles the lake. The lake itself is very popular for gentle-water, small-boat sailing, and the park’s green spaces include venues for several outdoor sports, including golf, soccer, cricket and Australian football.

By way of orientation, the light brown strip which runs from the top left-hand corner, is a collection of railway lines that feed into more than half of Melbourne’s extensive public transport train network.

The stadium on the north side of the lines is the Melbourne Cricket Ground, known widely as the MCG and to Melbourne residents as The ‘G. It has permanent seating for nearly 100,000 spectators and close to that number attend the Grand Final of the Australian Football League (AFL) season. In a normal year, this event would take place on the afternoon of the last Saturday in September. However, this year was anything but normal in Melbourne, so most AFL matches were held in Queensland, where the spread of Covid-19 was contained early on, culminating in the delayed Grand Final being staged in Brisbane two nights ago.

The ‘G is also famous as a venue for Test Cricket matches played between Australia and other cricketing nations. These always begin on 26 December, which is the Boxing Day holiday in Australia, and continue until 30 December or when the match has been won by one of the two sides. It is common for more than 80,000 persons to turn up on the first day of each match. The ‘G was also the main stadium for the 1956 Olympic Games and is occasionally used for other major events, including international rugby and soccer matches and concerts by visiting pop and rock stars.

On the other side of the railway tracks you will find Melbourne Park, the venue for the Australian Open, one of the four Grand Slam tennis tournaments, for which the main stadium is Rod Laver Arena (RLA). Melbourne Park runs from immediately opposite the MCG, westwards towards the patch of yellow gravel beside the Yarra River. Outside the tennis season, RLA is often used for contemporary music concerts.

Now, if there are any masochists out there looking for a way to occupy a few weeks of their pandemic-skewed lives while learning more about our home city, Maggie and I can thoroughly recommend this remarkable puzzle!

PS. Just after I finished drafting this post, Melbourne got the news we were hoping for!

Maggie and I are both in our mid-60s and live in Melbourne, Australia. This blog is devoted to our shared passions for travel and fine dining at home. As cooks, we are skilful and adventurous within a framework of mainly traditional ingredients and techniques, and we aim to prepare nutritious food that looks good and tastes delicious. Our evolving repertoire is influenced by both our travels and Melbourne's vibrant food culture. While we are young enough, our priority travel destinations are overseas, although we do spend a few long weekends each year exploring parts of south-eastern Australia. As travellers, we are most comfortable with a combination of organised and independent touring. Our first overseas journey together was to Italy in the northern autumn of 2008. We later travelled in France (2009), Spain (2011), Singapore and Cambodia (2012/13). All trips from 2014 to 2016 are documented in this blog. When time allows, we will publish posts about our journeys - eight and counting - in 2017, 2018 and 2019
View all posts by rmgtravelsandfood →
This entry was posted in Home life and tagged Jigsaw puzzles, Melbourne Map. Bookmark the permalink.