Posted on August 7, 2019 by rmgtravelsandfood

As we dragged ourselves out of bed for yet another depart-at-dawn journey, I was grumbling – half to pity myself, half to blame my wife – about having to go out on a third  boat cruise to gaze at an animal whose main quality as a tourist attraction was its capacity to hunt down and kill any tourist foolish enough to trespass on its territory.

Little did I know that I was about to have one of the most remarkable wildlife experiences available in Australia, for our tour operator happened to be one of the few that is invited to take its customers to the Adelaide River for a cruise with the man known as Pat.

Pat is a very different bloke, a ‘true Territorian’ as our driver/guide described him. He has worked with crocodiles for more than 30 years; never wears shoes (a podiatrist would weep to see his feet); has a beard down to his navel; and his hat looks like a moth-plague visited for lunch. But he has an affinity and profound respect for these reptiles and he knows how to wrangle them into putting on a breathtaking display.

The crocs in the stretch of river east of Darwin where tours are allowed to operate – four licenses in all – know the sound of Pat’s boat engine and it wasn’t long before one alpha male made himself visible. If looks could kill … 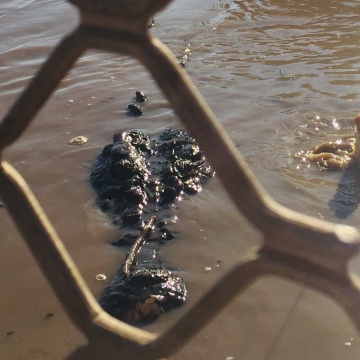 Pat used fresh chicken carcasses suspended on string from a pole to entice the crocodile to jump out of the water. (Although the boat was encircled in a waist-high, thick metal-pipe mesh, Pat assured us that the croc was quite capable of jumping on board if it so desired.) A crocodile’s teeth are perfect for crushing another animal to death in one bit but not so efficient at biting. So, we had plenty of time to take our photos before it managed to pull the carcass into its mouth. 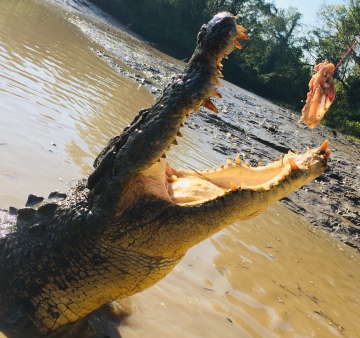 Once the male had its fill, one of its mates appeared on the scene for its feeding opportunity. However, she was taking great pains to ensure that she didn’t become the male’s main course for lunch. She would look at the carcass, look at the male to check for signs of an attack, look at the carcass, back to the male, and so it continued until she felt safe enough to focus on the meal at hand. 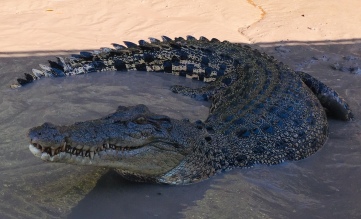 In Maggie’s next two photos, a female’s jaw was about 1.5 metres from her iPhone. Nice dental work! 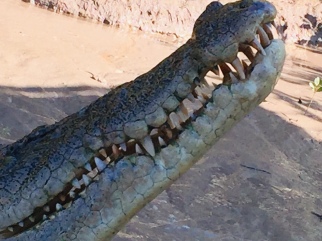 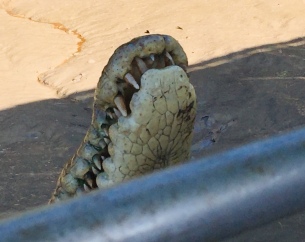 Once we’d all taken our ration of croc shots – we got up close to four or five and saw several others – Pat turned his attention to another prey-seeking species – kites. While preparing the carcasses that morning, he had filled a small bucket with pieces of fatty skin. Now, he called out to the kites in a mixture of English and the local Aboriginal language and 30 or more appeared. 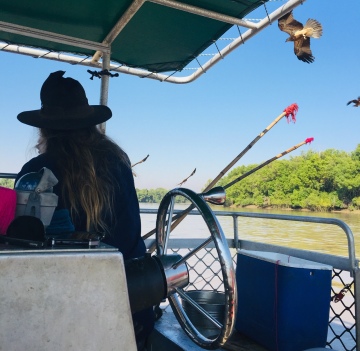 Pat then grabbed handfuls of the chicken skin and threw it across the water for the kites to swoop in and grab some. They would take it one talon and transfer it their mouth in a split-second, on the wing. You can see how it worked in this video:

Our next destination was Litchfield National Park, which is located south of Darwin, so we had to back-track a little. As we did, I wondered if the balance of the day’s itinerary was going to struggle for air but, in the expert care of our driver/guide, it worked out pretty well.

Soon after we entered Litchfield, we stopped to view two types of giant termite mounds. (The termites are small but they sure know how to construct an edifice.) 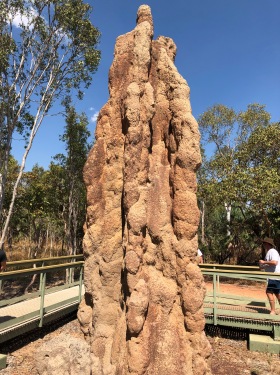 The next photos are of mounds made by termites which are commonly called ‘magnetic termites’. They’re not really but you learn more about them and the termites who build the ‘cathedral’ mounds here. 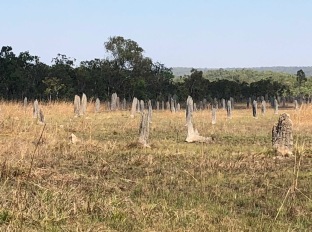 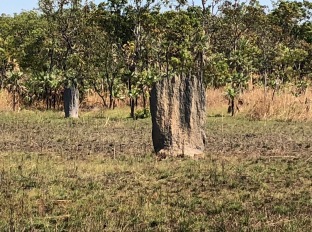 From the termite-mound site, we drove down to Wangi Falls, one of Litchfield’s popular waterfalls. After a refreshing help-yourself picnic lunch of salad, meats, cheese and fruit, we had free time to explore the falls area, which was busy with a mix of tourists and local families on a Saturday outing.

Although it was the dry season, the falls had plenty of flow due to the capacity of the sandstone rock in the adjacent plateau to absorb water during the wet season and then release it steadily afterwards.

Maggie and I are not big on swimming but we found a spot to sit comfortably and dangle our legs knee-deep in the fresh water of the rock pool at the base of the falls. It was a very warm day, so it was very soothing for our feet! 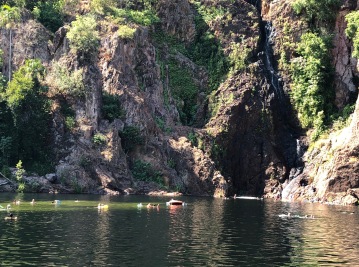 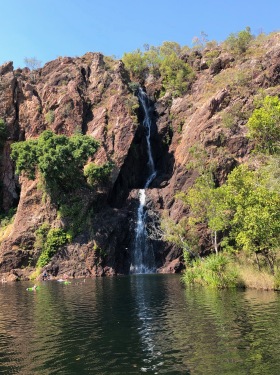 Before we headed back to our tour van, I took one of the paths around the rock pool to an idyllic patch of rainforest, which immediately brought to mind a rainforest Maggie and I had visited on the Frankland River in Tasmania in March 2018. 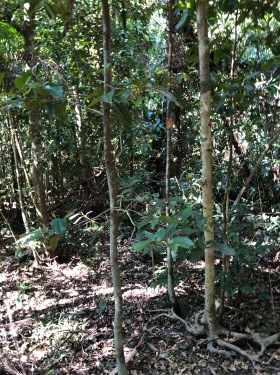 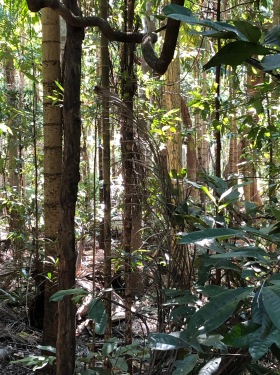 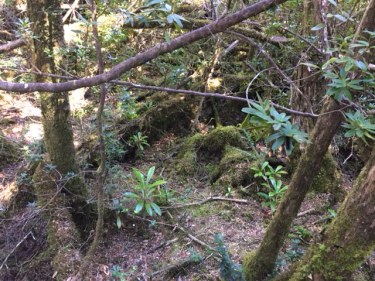 The Frankland River is more than 3,500 kilometres from Litchfield, in the cool temperate zone. Just goes to show, that the structure of a a rainforest is a factor of rain firstly, and other factors after that.

From Wangi Falls, we stopped briefly to view Florence Falls, which are small and beautiful, with a very popular rock pool. However, being so soon after the winter solstice, we didn’t have time to walk down to see them up close. 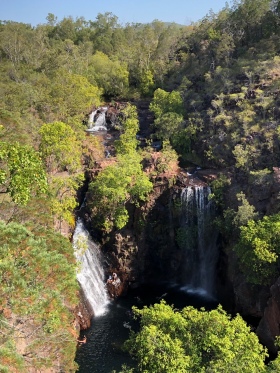 Besides, we had a scheduled rendezvous with one last Northern Territory sunset, overlooking Darwin’s Fannie Bay. We were treated to some bubbles and cooked prawns, as we toasted an outstanding day trip. 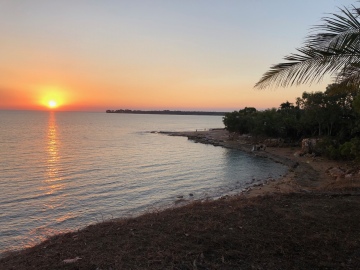 But, wait! There’s more! On our flight home to Melbourne the next day, we had some wonderful views of the Simpson Desert, to our east, which lies in parts of the Northern Territory, Queensland and South Australia. 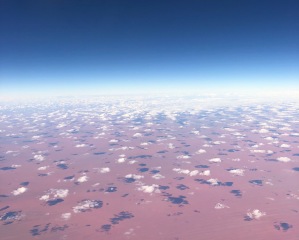 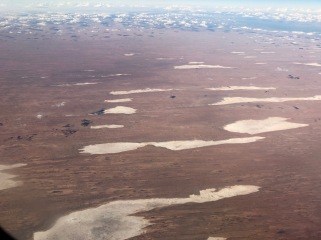 We had never seen it before because, when we fly to Singapore and beyond, the flight path lies further to the west. It was a spectacular way to finish to one of our most deeply-satisfying travel adventures.

Maggie and I are both in our mid-60s and live in Melbourne, Australia. This blog is devoted to our shared passions for travel and fine dining at home. As cooks, we are skilful and adventurous within a framework of mainly traditional ingredients and techniques, and we aim to prepare nutritious food that looks good and tastes delicious. Our evolving repertoire is influenced by both our travels and Melbourne's vibrant food culture. While we are young enough, our priority travel destinations are overseas, although we do spend a few long weekends each year exploring parts of south-eastern Australia. As travellers, we are most comfortable with a combination of organised and independent touring. Our first overseas journey together was to Italy in the northern autumn of 2008. We later travelled in France (2009), Spain (2011), Singapore and Cambodia (2012/13). All trips from 2014 to 2016 are documented in this blog. When time allows, we will publish posts about our journeys - eight and counting - in 2017, 2018 and 2019
View all posts by rmgtravelsandfood →
This entry was posted in Travel and tagged jumping crocs, Litchfield National Park, salt water crocodiles. Bookmark the permalink.