Journey through the middle of Australia: days 1&2

Posted on July 15, 2019 by rmgtravelsandfood

Maggie and I have recently returned from a fortnight’s journey through the middle of Australia, from south to north. Our journey began in Adelaide, the capital city of the state of South Australia and finished in Darwin, the capital of the Northern Territory, extending over 23 degrees of latitude.

Our principal mode of travel was the passenger train called The Ghan, named in memory of the men who came with camels from western Asia – including Afghanistan – and from northern Africa, in the mid-19th century, enabling Europeans to journey into the sandy deserts and scrubland of the inner regions of Australia.

The trip from Adelaide to Darwin is 2979 km long and takes 54 hours over two nights and three or four days, at an average speed of 85kmh. We took the four day option, which involved alighting at Alice Springs, the main town in Central Australia, in order to visit some of the spectacular sites in that region. A week later, we re-boarded The Ghan for the journey to Darwin.

The first group of photos were taken at the station in Adelaide while we were waiting to board our carriage. Our train was nearly 750 metres long; the middle photos were taken from the same point, looking in opposite directions.

The fourth photo shows the scene in the reception hall, where we were treated to free bubbly and live music from a guitarist-singer, by way of acclimatising us to the quality of experience that awaited us! 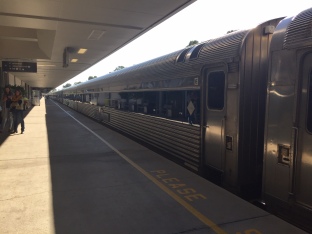 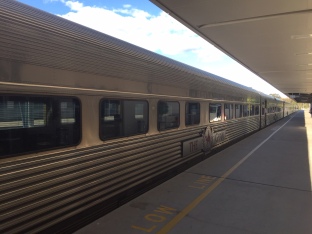 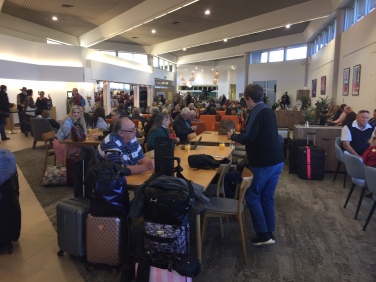 Then, we and the other 250 passengers were invited to make our way, by foot or golf-cart, to our carriage and settle into our cabins. We had booked a ‘Gold Superior’ cabin, the middle quality, which provided is with twice the standard floor area, a ‘three-quarter’ bed, complimentary bubbles, armchairs, a coffee machine and sundry other creature comforts.

The train’s passenger carriages were laid out in groups of three separated by a lounge car (see below), a dining car and a galley, followed by a mirror image of that configuration. The standard of the meals was remarkably high, given the cramped conditions, and the wine list featured a generous selection of popular table wines from Australia’s most esteemed wine regions. 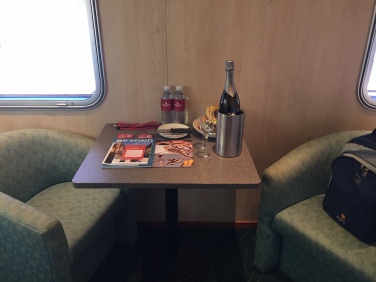 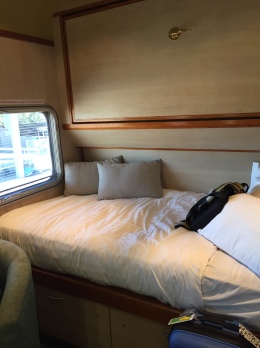 Before we went to sleep, I organised us to lie face up on the bed with our heads up against the window. Then I turned all the lights out, giving us a wondrous view of the cloudless night sky, with countless thousands of bright stars and a clear image of the Milky Way. I had been fortunate enough to enjoy such a view before; for Maggie, it was a magical first.

We had set our travel clock to rouse us at an ungodly hour the next morning, so we could join most of our fellow-passengers for an outback sunrise experience. Being a winter’s morning far from any maritime influences, the temperature was close to freezing but the train crew had risen even earlier to light two bonfires and prepare tables laden with hot drinks and warm bakery items.

There was a bit of a buzz amongst the passengers as the sky began to lighten, although most of us were equally pleased to return to our cabins and catch forty winks. 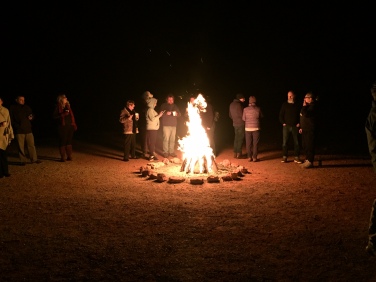 As the sun climbed through the morning, we entered the vast region of Australia known affectionately as the ‘Red Centre’. I think you can see why that is the case! Believe it or not, every 10 years or so, there is enough rainfall to cover much of this land with floodwaters, most of it remaining inland to replenish underground water supplies or drain into Lake Eyre, which is up to 15 metres below sea level. (More info here.)

Early in the afternoon, we crossed from South Australia to the Northern Territory and crossed the dry bed of the Finke River, said to be the oldest riverbed in the world. Nowadays, it is dry most of the time, sometimes for years on end, but the indigenous gum trees are able to grow long roots to tap into water lying well below the parched surface. 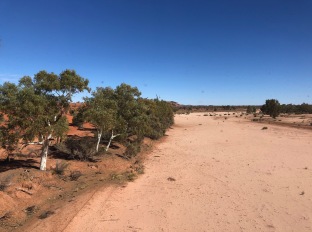 Before much longer, The Ghan was slowing down as we reached Alice Springs, the main town of the Red Centre, rich in history and the country of the Arrente aboriginal people. 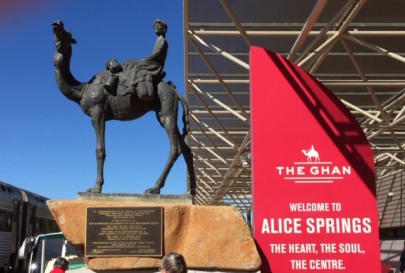 This is where we broke our journey for seven days to explore both ‘The Alice’ and the World Heritage-listed sites of the Uluru-Kata Tjuta National Park. I will share those experiences with you in subsequent posts.

Maggie and I are both in our mid-60s and live in Melbourne, Australia. This blog is devoted to our shared passions for travel and fine dining at home. As cooks, we are skilful and adventurous within a framework of mainly traditional ingredients and techniques, and we aim to prepare nutritious food that looks good and tastes delicious. Our evolving repertoire is influenced by both our travels and Melbourne's vibrant food culture. While we are young enough, our priority travel destinations are overseas, although we do spend a few long weekends each year exploring parts of south-eastern Australia. As travellers, we are most comfortable with a combination of organised and independent touring. Our first overseas journey together was to Italy in the northern autumn of 2008. We later travelled in France (2009), Spain (2011), Singapore and Cambodia (2012/13). All trips from 2014 to 2016 are documented in this blog. When time allows, we will publish posts about our journeys - eight and counting - in 2017, 2018 and 2019
View all posts by rmgtravelsandfood →
This entry was posted in Travel and tagged Alice Springs, Central Australia, Ghan train. Bookmark the permalink.