Posted on October 30, 2017 by rmgtravelsandfood

In the 1960s and ’70s, when Maggie and I were growing up in Melbourne, the food that was served during festivities associated with Christmas Day reflected the predominantly British heritage of the Australian population. Yes, the mass migrations from southern and central Europe following the second world war meant that there were thousands of Australians who adhered to different festive-food traditions, but we were blissfully unaware of them and our anglocentric media did little to enlighten us.

So, despite our antipodean climate, with Christmas Day temperatures often above 30 degrees Celsius, we would sit down to meals in which the feature items included roast stuffed turkey, baked ham, steamed ‘Christmas’ pudding and brandy custard. The only Australian twist in the typical menu was a prawn cocktail. (Happily, contemporary festive menus are much more aligned with our climate.)

The pudding, packed with a variety of dried fruits, would be full of flavour but it could also feel uncomfortably heavy in the belly. This was especially the case when the pudding’s fat content was derived from the beef fat known as suet.

About 15 years ago, I twice made such puddings, ie using suet. It was a smelly exercise while the pudding was going through the hours of its initial cooking. However, it must have been an exceptional recipe, as I don’t have any other bad memories of it.

Then I came across a recipe in an autobiography written by Ian Parmenter, an Australian television producer who was also an excellent cook. Ian’s recipe included ground macadamia nuts, which was the only source of fat or oil in the pudding. His other innovation was to use dark beer, or stout, as the main source of moisture. In deference to the indigenous macadamia nut, as well as the local dried fruits, Ian called it an ‘Australian Christmas Pudding’.

Within weeks I had made two puddings using Ian’s recipe. I was enchanted at how pleasant it was to prepare and cook, and how light it was to eat, compared to a traditional pudding.

Maggie and I made a batch of the puddings ahead of the recent lunch we hosted for the 70th birthday of one of my cousins. Victoria is a vegetarian and we wanted to give her one of the puddings as a birthday present.

Last week we decided to heat up one of the two remaining puddings – the mix had stretched to three bowls – and enjoy it with friends who were coming for dinner before heading overseas for a month. To heat the pudding, I suggest you take it out of your fridge at least one hour beforehand and then heat just as if you were cooking it for the first time, ie in boiling water that comes at least half way up the outside of the bowl, for about 2 hours.

We served it with some low-fat ice-cream and a good quality commercial vanilla-bean custard. It was delicious, as it has proven to be on three further occasions – it reheats readily in a microwave oven – but you do need to have some sweetness in the bowl to complement the tang of the fruit and the bitter edge of the beer. 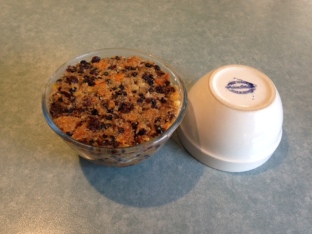 Maggie and I were both born in the early 1950s and we live in Melbourne, Australia. This blog is mainly devoted to our shared passions for travel and fine dining at home. Recently, I added Australian politics to the scope of the blog, inspired by the election of a Labor Government at a national level. Rick Grounds
View all posts by rmgtravelsandfood →
This entry was posted in Cooking and tagged Christmas pudding, macadamia nuts, recipe for Christmas pudding. Bookmark the permalink.