Posted on May 8, 2017 by rmgtravelsandfood 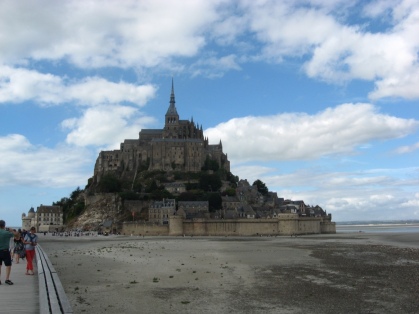 Le Mont St Michel, the abbey-capped island just off the western-most part of the coast of Normandy, is one of the most recognisable sites in France. To me, it is not especially beautiful, nor architecturally brilliant, nor grand. But it is one-of-a-kind, captivating and almost unreachable in its mystery, with a hint of medieval Disneyland thrown into the mix, and made all the more striking by the fact that the adjacent coastline is so flat.

It is also one of the most frequented sites in France, averaging over 8,000 visitors per day. The built form has evolved and enlarged over the centuries – find out more here – but the only changes since I first went there in 1982 have been the crowds, the conversion of several buildings into businesses feeding off those crowds and the introduction of systems to manage the flow and impact of visitors.

The island is connected to the mainland by a viaduct, which is closed to private vehicles. So, visitors have the options of a not-too-strenuous walk; a bus service using vehicles with controls at either end, like a tram; or a horse-drawn carriage. We used the second of these – it was inexpensive and the buses ran frequently.

A visit to the abbey complex starts to become strenuous, both physically and financially, when you pass through the entrance gate and begin to jostle your way up the slope towards the main abbey edifice. If you are thirsty, let me tell you that the price of a bottle of water is in inverse proportion to your distance away from the entrance area! 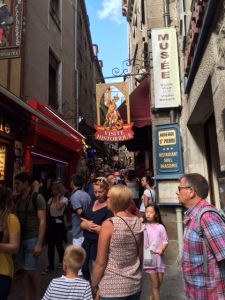 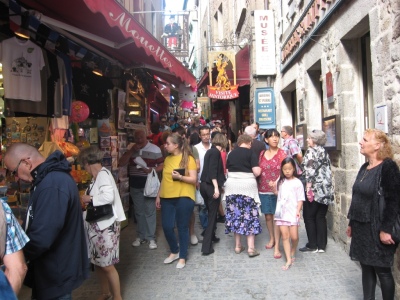 Despite the crowds, it is not difficult to appreciate the virtues of the ancient structures and the views as you make your way to the upper reaches of the pathways. Owing to my bung hip and Maggie’s bung knee, we didn’t go all the way to the top, but a decision to descend via an outer route rounded off our explorations very satisfactorily. 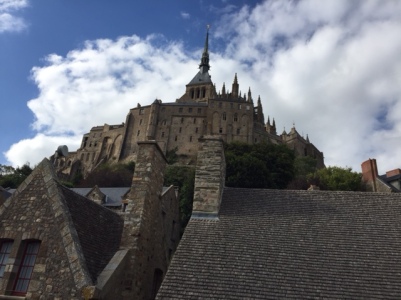 Our last view of the island was across the sandy fields of the low-lying coastal fringe to the east of the village of Mont St Michel, where we had spent the night comfortably in one of several accommodation premises.

Maggie and I were both born in the early 1950s and we live in Melbourne, Australia. This blog is mainly devoted to our shared passions for travel and fine dining at home. Recently, I added Australian politics to the scope of the blog, inspired by the election of a Labor Government at a national level. Rick Grounds
View all posts by rmgtravelsandfood →
This entry was posted in Travel and tagged Le Mont St Michel. Bookmark the permalink.