Posted on November 24, 2016 by rmgtravelsandfood

(I have found it quite challenging to prepare this first post about the sites we visited on our tour of First World War battlefields. Largely, this is because I knew only the most basic details of the war beforehand. Unfortunately, our guide added little in the way of information that helped to put the sites we visited in a strategic or temporal context; we weren’t even given a useful map.

I have spent some time trying to fill some of my knowledge gaps by reading articles on the internet, so that I might be able to give you an account that provides some real meaning for our itinerary and our photos. There will probably be a few errors of fact in this and the subsequent posts but, with any luck, they will not take us too far from the wider truths.

On the first day of the tour, a Sunday, we left Paris soon after 8am, bound for the Flanders region of Belgium. When we arrived at our first destination, we discovered that, yes, red poppies do grow in the fields and roadsides of Flanders.

Tyne Cot Cemetery and Memorial to the Missing

Full details of this cemetery and its adjoining memorial may be found here.

The first image, of a crop of leeks, gives you an idea of how flat and open the land is, much as it was at the time of the war. When, as often happened, groups of soldiers advanced across such spaces in the face of machine-gun fire, there was little to shield them from the deadly bullets, except for the occasional hole created by artillery fire. Death came quickly and multitudinously.

I don’t expect you to be able to read many of the words on the information board in the second photo. I’ve included it here to show you what the Commonwealth War Graves Commission (CWGC) provides at all of the numerous sites for which it is responsible. The quality and quantity of site-specific information was excellent. 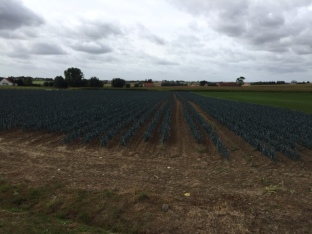 Nearly 12,000 Commonwealth servicemen – United Kingdom, Australia, etc – are buried at Tyne Cot, the largest number buried at a CWGC cemetery. More than two-thirds of them are unidentified.

(I have often made the 400km journey from the city of Perth in Western Australia to the city of Albany on the south coast. 12,000 is more than the sum of the entire populations of all the towns and farms between these two points.)

The Cross of Sacrifice – there is one at every one of the cemeteries – is located in the middle of the site, on the remains of what had been a reinforced concrete blockhouse, occupied by German machine-gunners. 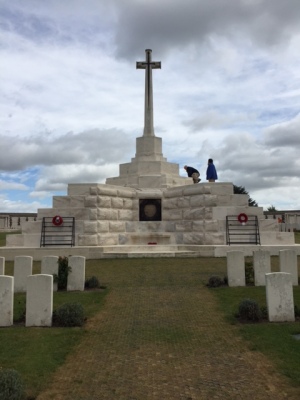 The Memorial to the Missing is a long, sweeping wall of panels carrying the names of 35,000 United Kingdom and New Zealand soldiers whose bodies were never identified. (This is far from all such cases.) 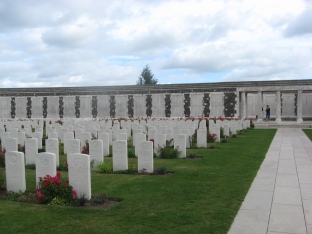 The combined effect of the cemetery and memorial was close to overwhelming and the members of our tour group devoted an extended period to taking it all in and quietly processing the appalling reality represented here.

The vast majority of the troops who are buried at Tyne Cot, or whose names are listed on its Memorial to the Missing, lost their lives is what is commonly known as the Battle of Passchendaele; to some military historians it is known technically as the Third Battle of Ypres (and by other names to Germans and French-speaking people, respectively).

The city of Ypres was one of the main bases and points of departure towards the front for the remnants of the Belgian army, some French forces and those British-led forces serving in Belgium. Germany had sought to capture Ypres and thence the coast to its west when it invaded Belgium in August 1914. However, the German advance had been held up by Allied troops. German forces then dug in along and behind ridge-lines generally to the east of Ypres, forming a bulge-like shape known as a ‘salient’.

For various reasons, the situation altered little through 1915 and 1916. The German army was able to strengthen its position slightly in the northern Spring of 1915 and there was continued significant loss of life on both sides from artillery fire and occasional skirmishes.

Through 1916 and the early months of 1917, the British command prepared plans for an offensive in Flanders, to take place in the northern Summer of 1917. The objectives were to drive the German forces back from their advantageous positions and then proceed to recapture the northern half of the Belgian coastline, including the ports from which German submarines posed a constant threat to British shipping.

You will find the Wikipedia account of this offensive here. Although it succeeded in gaining control of the higher ground east of Ypres, it came at a terrible toll of casualties on both sides and it did not deliver control of any additional coastline.

As well as Tyne Cot, we visited one of the many other significant sites connected with the 1917 battles. This was a memorial to the Canadian forces who captured the heart of the Passchendeale Ridge, a site known as Crest Farm, and then, in house to house fighting, the nearby town of Passchendeale itself. (If you visit the Wikipedia link above, you will see photographic evidence of the near-total destruction of the town.)

The words on the plaque read: “Faced with an experienced enemy, entrenched in a dominant position, Canadians fought with extraordinary courage and determination under intense fire to capture Passchendeale Ridge. Advancing in horrific conditions, through mud that was often waist-deep, the Canadian Corps sustained approximately 16,000 casualties during this assault, an immense cost that testifies to the almost impossible task set by the British high command. Nine Canadian soldiers were awarded the Victoria Cross for their outstanding valour, more than in any other battle in the history of Canada.”

The main 1917 Allied offensive in Flanders was preceded or accompanied by other attacks, which had the objectives of driving the German army from positions which threatened Ypres or which overlooked the intended direction of the main offensive.

The Battle of Polygon Wood was an example of the latter. The Allies’ aim was to expel German forces from high ground known as a ‘butte’, formed from excavations for a C19 railway line, adjacent to what was left of the original wood. You can read more about this battle here.

Our photos show, in order: the main cemetery, including a memorial to New Zealand soldiers who died in the vicinity in the 1917 battle or during the subsequent German offensive of 1918; the main WW1 memorial for the Australian Fifth Division, which sustained more than 5,000 casualties (dead or wounded) during the three days it took to capture the Polygon Wood site; the view from that memorial along the top of the butte in the direction of a smaller, original front-line cemetery below; and the Cross of Sacrifice at that cemetery. 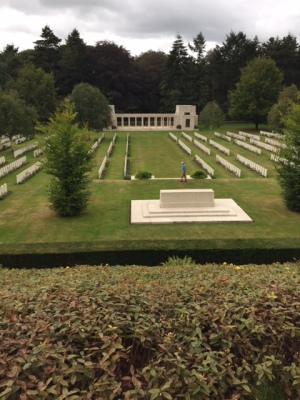 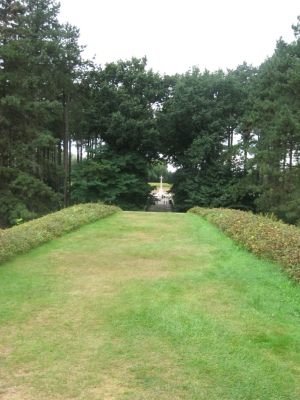 The site known as Hill 60 has become more widely known in recent years as a result of a commercial movie, Beneath Hill 60, about what occurred there in 1916 to 1917.

The site is open to the public, but there is no properly formed walking track and many sections are fenced off for reasons of safety – unexploded mines or shells; and respect – numerous soldiers from both sides were buried underground and their bodies were never recovered.

Near the entrance to the site, there is a simple concrete block, inscribed as follows:

“Hill 60, the scene of bitter fighting, was held by German troops from the 10th December 1914 to the 17th April 1915, when it was captured (after the explosion of five mines) by the British 5th Division. On the following 5th May it was recaptured by the German XV Corps. It remained in German hands until the Battle of Messines (7th June 1917) when, after many months of underground fighting, two mines were exploded here. And, at the end of April 1918, after the Battles of the Lys, it passed into German hands again. It was finally taken by British Troops under the command of H.M. King of the Belgians on the 28th September 1918. In the broken tunnels beneath this enclosure, many British and German dead were buried and the hill is therefore preserved, so far as nature will permit, in the state it was left after the Great War.”

There, in just 151 words, you have both the revolving-door character of the Western Front story and the profound futility of war in general!

More information on the site and the various battles which occurred there can be found here and here, respectively.

The main memorial at the site is a dedication to the 1st Australian Tunnelling Company, whose work is featured in Beneath Hill 60. There are two bullet holes in the memorial’s metal plaque from fighting that occurred in the area during the Second World War. 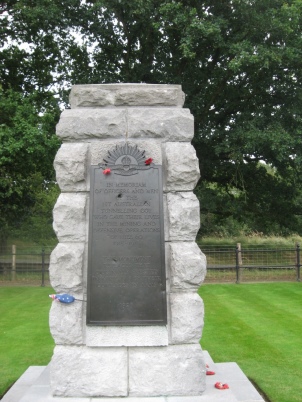 The other point of interest at the Hill 60 site is the presence of a concrete bunker, built by the German Army but also utilised by Allied troops when they had control of the hill. It is still largely intact, a century later!

Hill 60 wasn’t the last site we visited on this first day of our tour. From here we drove to the city of Ypres itself, arriving there late in the afternoon. We spent about four hours in Ypres, culminating in a remarkable experience which I will relate to you in my next post.

Maggie and I were both born in the early 1950s and we live in Melbourne, Australia. This blog is mainly devoted to our shared passions for travel and fine dining at home. Recently, I added Australian politics to the scope of the blog, inspired by the election of a Labor Government at a national level. Rick Grounds
View all posts by rmgtravelsandfood →
This entry was posted in Travel and tagged Hill 60, Memorial to the missing, Passchendaele, Polygon Wood, Tyne Cot cemetery. Bookmark the permalink.