Cruising up the Rhine, part 2: brushing through the locks

Posted on November 2, 2016 by rmgtravelsandfood

If the volume of commercial freight traffic that we passed on the Rhine River was an interesting novelty for Maggie and me, what words can I use to adequately characterise how we felt about passing through the locks on the great waterway? ‘Super novelty’?

In Australia, there is a small number of locks on a very small number of rivers, but their contemporary economic and social significance is inconsequential and few of my fellow countrymen know of their existence, let alone see any of them. And although I had some passing familiarity with the presence of locks in Europe as a result of long-ago school studies in geography and history, neither of us had envisaged actually meeting one face-to-face; and I mean literally!

Our first encounter with a lock occurred in the middle of a night, about half way through the cruise. I woke up for a comfort stop and realised that it was very dark outside; ie no moonlight or riverside lighting. When I pulled back the curtain, I found what I slowly recognised to be a concrete wall, only a few centimetres beyond our balcony. When I roused Maggie to join me, she confirmed that, yes, the wall was within arm’s reach, it was damp, even slippery, and the ship was moving up the wall. We were in a lock!

In the following days, the cruise took us further up-river, towards our destination in Switzerland, and the sea-level of the surrounding terrain increased at a progressively faster rate. That meant we would be passing through locks more often. Usually this was scheduled to occur when most of us were fast asleep, so, when the ship’s captain let it be known that we would reach a lock at about 9.30 to 10.00pm on our second-last night, there was a buzz of excitement in the dining room.

Having also been told that there would be an earlier opportunity on the final evening, Maggie and I  opted to go to bed. Which was just as well – there was a long delay and few, if any, passengers witnessed it. However, we were all on hand for the following evening’s event and that is the one captured in the following photos. 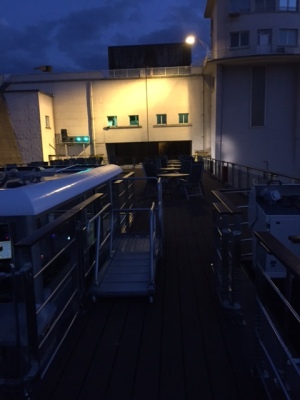 These three pairs of pics show the ship approaching the lock’s entrance and then within the lock, before the rear gates were shut. Note that the ship’s bridge has been lowered to allow the ship to enter the lock, that the ship is being controlled from a panel set up on the port side and that the captain is keeping an eye on proceedings from a secondary station on the starboard side. 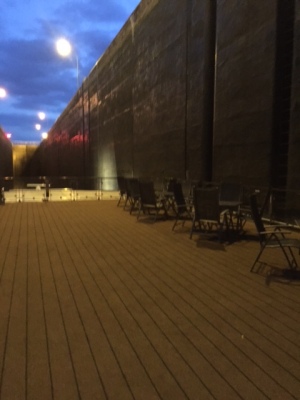 The next two images show the height to be reached by the water as it fills the lock – the top of the dark grey section – and some of the mould growing on the wall as a result of being damp most of the time.

The next four pics capture the gradual rise in the water level, with the ship pointing towards the exit gates. 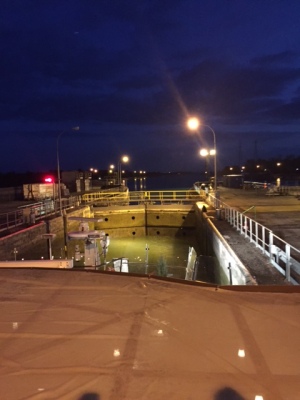 Finally, the water in the lock reaches the level of the next upstream section of the river and the gates to open to allow the ship to leave the lock.

The whole process took between about 40-to-45 minutes and, as you might gather, we we were very much in its thrall!

Maggie and I are both in our mid-60s and live in Melbourne, Australia. This blog is devoted to our shared passions for travel and fine dining at home. As cooks, we are skilful and adventurous within a framework of mainly traditional ingredients and techniques, and we aim to prepare nutritious food that looks good and tastes delicious. Our evolving repertoire is influenced by both our travels and Melbourne's vibrant food culture. While we are young enough, our priority travel destinations are overseas, although we do spend a few long weekends each year exploring parts of south-eastern Australia. As travellers, we are most comfortable with a combination of organised and independent touring. Our first overseas journey together was to Italy in the northern autumn of 2008. We later travelled in France (2009), Spain (2011), Singapore and Cambodia (2012/13). All trips from 2014 to 2016 are documented in this blog. When time allows, we will publish posts about our journeys - eight and counting - in 2017, 2018 and 2019
View all posts by rmgtravelsandfood →
This entry was posted in Travel and tagged locks, Rhine river, Viking Cruises. Bookmark the permalink.